I spent this past weekend in the glorious world that is Los Angeles, California. It had been four years too long since I last graced Hollywood with my presence, so this was kind of a big deal. However, despite the fact I was jet setting to escape the real world, there was one thing I could not escape — my blog. You know, the website you are on right now. So, from the minute I arrived at the airport to depart for the west coast to the minute I got back (ugh), my tablet was basically my BFF. Without a tablet, a blogger’s worst nightmare is going on vacation. Basically, vacation means going off the grid for an extended period of time and as blogger, there’s no paid time off. There’s no one to cover what you miss. And you can’t just go MIA for however long you’re away. You have to write. You have to post. You have to read. You have to be on email. And you have to tweet. And, like, all that other good stuff.

Thanks to my Intel Tablet, I was able to keep up with it all and keep myself occupied during boring times such as when I woke up at 6am LA time because to me that was 9am east coast time, and while waiting at the airport. That can be the worst.

Here are some places I used my tablet on vacation and how I made the most of it: 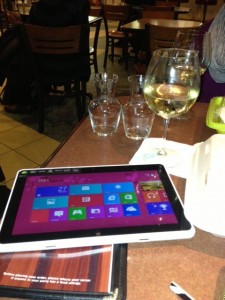 You get to the airport so early to get through security and often end up waiting at your gate… or waiting at a bar with a large glass of wine that costs 15 dollars. Either way, you’re going to need a way to occupy yourself. Sure you can grab a book or a magazine, but the problem with those is that they end. A tablet doesn’t. There is an endless amount of stuff you can do on a tablet and it won’t drain your phone battery while doing so. A tablet is also far easier to transport in your carry on than a large, heavy laptop. A tablet especially comes in handy for long layovers, which I didn’t have — as I’m terrified of flying and am a nonstop kind of girl all the way. Anyway, if you want to read – use the Kindle app on the tablet. Need to work? Log on remote desktop or check your email. Need to blog like me? Do it on the tablet and warn everyone via FB and Twitter that you’re about to go on a flight, so they won’t be hearing from you for a while. 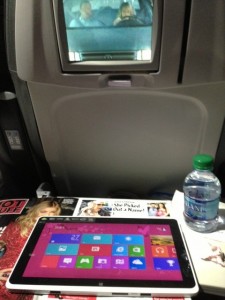 I took JetBlue, so I couldn’t log on to the Internet during my flight (booooooo, you whore). BUT I did have other things I could do on my tablet mid flight… One very important thing being blogging. My Intel Tablet comes with MS Word so I can write, write, write and save said documents to later copy and paste into WordPress. My iPad definitely doesn’t let me do that. Success! Obvs I could listen to music too… but the blogging is waaaayyyy more important. No blogger likes letting 6 hours (or more) go to waste. 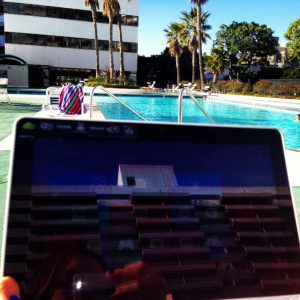 Oh the sweet life. Even not on vacation, tablets are a great help at the pool (Summer — you are so close, yet so far away). A blogger can get veryyyy anxious not being able to blog for long periods of time. Even if I know I’m doing something fun, like going to a pool, I still freak out about not being able to tweet, write, or keep up with the (very important entertainment) news. But with my tablet, I can keep up with everything anywhere. Luckily, I have a hot spot on my phone so I can actually connect to the Internet anywhere (except on flights via JetBlue). I can check my email, post articles, tweet those articles, keep up with other blogs, etc — you know, all the stuff I do on a regular basis. I also don’t have to worry about having a big huge laptop stuck to your thighs or sitting on a table next to you. Oh, and the best part about using the tablet at the pool versus the beach is that I don’t have to worry about it getting it covered in sand. 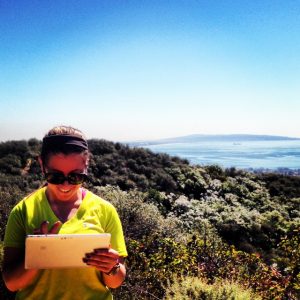 Oh yeahhh — check me out. High above LA. To have a true LA vaca, you need to do some sort of exercise at least five times a day while drinking juice. Well, that we did my friends. We hiked the Temescal Canyon, which was a 4 mile loop up many extremely steep hills. We were out of breath like 2 minutes in, which was kind of pathetic, but we’re from the East coast so, whatever. I brought my Under Armour draw string bag to hold my bottled water and tablet. You may be asking why did you bring the tablet on the hike… and I have to admit, to take that very above this text. I mean– how cool does that look! Anyway, like I said, with my phone’s hotspot I can connect to WiFi anywhere, sooo we tracked the mileage and calories with the tablet, took some pictures, and of course tweeted them to the world. Totes necessary in this day in age. I mean, I could have posted a #latergram, but I was more into an #instanow. With that picture, who wouldn’t want to post it immediately? Here’s another… 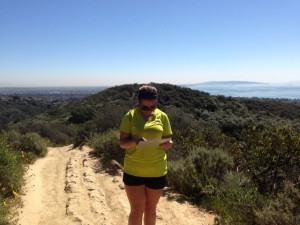 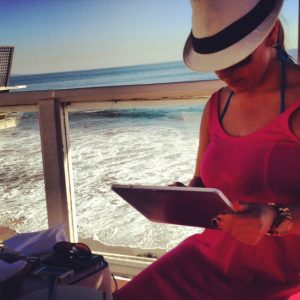 Yes my friends. This was lunch. We ate at this super cool restaurant on the beach called Moonshadows (our favorite college bar was called Moonshadows… or Moonies… so this made it even better). It had outdoor seating on couches and ocean views. Like the ocean was behind us. It was superb. Our waiter took forever to get us menus for some reason, so what did I do? Took out the tablet and found the menu online of course! And then instagrammed this picture. And then tweeted it. I’m beginning to wonder if I could last a day without technology… Could anyone? 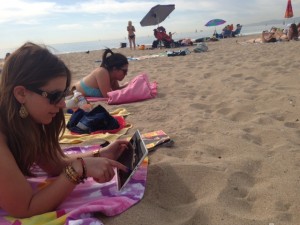 If you didn’t already know, I love gold. And if you did know, now you know more because of this picture. Anyway, tablet on the beach probably sounds and looks like a bad idea because of all of the sand that can get caught up in it… but whatever. I took it out, checked my Twitter feed, checked my blogged stats, published an article, checked my email, and put it right back in the beach bag. No sand. No damage. No worries. A tablet really does help a blogger relax… as if that wasn’t easy enough to do in 75+ degree on the beach in March.

On the plane ride home. 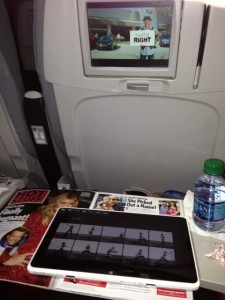 I was feeling kinda fat after a 4 day binge drinking and eating fest (there were many a margarita — let me tell you), so in addition to writing (and sleeping — let’s be serious), I used the workout app to motivate myself to workout like crazy when I got home. As if the women of LA didn’t motivate me enough to do so already. Everyone is just so… thin. And drinks juice. But really — even seeing pictures of the above girl doing all sorts of squats and arm raises made me want to get out of my seat and shed pounds stat. However, when I got home I of course didn’t actually do these exercises as it was a red eye and was 8am… but I will as soon as I get home tonight because being in LA was probably the best thinspiration ev.

Anddddddd now that I’m home, this is how I feel… 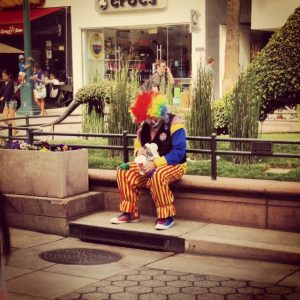 Basically, I hope you now understand why a tablet is so necessary to anyone who blogs, writes, reads, works, or… is a person. Because all people could benefit from having a tablet on vacation and in every day life. Duh. If you live in LA, perhaps your tablet can help you get from the 405 to Marina Del Reeeey. 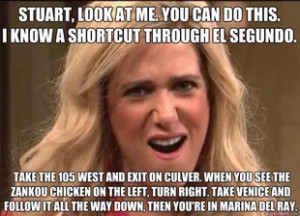 5 Ways To Avoid Getting “Cat Fished:” Are You In Danger?