Middle School and early high school were defiantly the glory days for TRL, in my book, and like Sam had mentioned, rushing home from school to watch a countdown the rarely changed was the most exciting part of my day. And remember when BSB or N*Sync would show up, and actually shut down times square?! That was even more thrilling. I spent my college years in NYC and during my freshman year I spent more time in the MTV studios than I’d like to say. However, at the time, it was pretty cool!

Within three weeks of living in New York, I attended a taping of TRL with my floor. I remember I was home for the weekend, and my friend texted me saying she signed us up to go. I was sitting in my friends car when I got the text, and remember stopping the conversation to brag about this. I blame my level of excitement on the fact that NYC was still so new to me! Even Times Square was exciting ,now I’d rather die than walk through Times Square. When we got to the studios, we waited outside forever, and had to fill out paperwork because during the show, they were going to be giving out MONEY! If you were under 18 and got money, you had to have your parents fill out more paperwork, and then a check would be mailed to you. I was over 18, but left empty handed. Grabbing at Zach Braff while he handed out money to the crowd didn’t pay off for me. Actually being there, and seeing just how tiny the studio actually is was really interesting…and I was so excited to be inside, and not outside in the crowd hoping to get chosen to go in with some stupid neon sign saying I love Britney Spears.

Filling out the paper work while waiting in line during my first visit was golden. We were now on a list of studio members who actually lived in NYC, and could come fill seats basically when ever needed. At the time, this was awesome! I believe a month or 2 later, I was emailed about attending the live finale of The Hills! That show was my life, and I think the life of most of my classmates, so obviously I couldn’t wait!!! When the night of the taping arrived, we all rushed home from school, got dressed in our most “LC” outfits and headed to Times Square again. We waited in line again for about an hour, got our wristbands, and we were in. This time, we were seated right behind Lauren, Audrina and Whitney!  Sadly, you can’t see me in this picture. But the girl in the yellow is my friend Cara, and the girl in the White is my friend Dasha, I was right next to Cara staring at LC’s hair the whole night. Her hair is perfect. 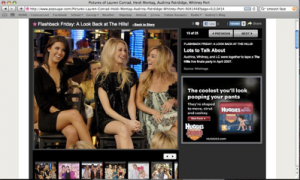 My final trip to the MTV studios was for a finale taping of Laguna Beach, but not the good  Laguna…it was season 3 or 4, when it was an entire new cast, including Lauren Conrad’s sister…boring. With this taping, when I walked into the studio, two things struck me…the Director of the show said Hi to me, and welcomed me back (red flag that I’ve already spent a lot of time at MTV) and then commented on how I was no longer blonde. I had decided to try out being a brunette. I honestly think because I was no longer a blonde I never got invited back! Which at the time, made me sad. I was having a lot of fun attending these tapings. When the show was over, we waited outside to take pictures with the cast. Would we ever do that now? Absolutely not…but at the time, I think we mostly wanted to brag.

Where Are They Now? Just Graduated: Bisola J. Akinduro

Where Are They Now? One & A Half Years Later: Lauren Stewart