If you don’t already know, this is the week where new Fall programming begins. Our favorite shows are back – meaning season 3 of Glee kicks off tonight at 8 – and many new shows are premiering such as Zooey Deschanel’s new show – New Girl – which is on tonight at 9 (and I’m super excited about it because she is awesome). 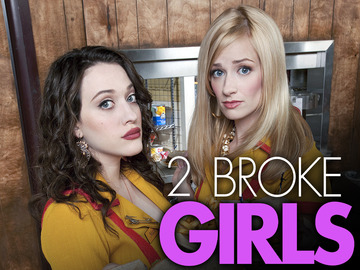 This show is your basic 30 minute sitcom. If I was in front of my TV at 930 on Monday night with nothing else to do or watch, I would probably put this on. There were definitely a few good jokes in last night’s pilot episode, but I don’t see myself running to my TV to watch any other episodes, being upset if I missed an episode, or watching it online the next day.

The show is literally about two broke TWENTY SOMETHING girls (yes, fellow 20 somethings – there is a show about us). One was already broke and one is newly broke… And as 20 somethings/recent college grads we can probably all relate.

However, both girls are the extremes of their kind. Kat Dennings, who plays the brunette, comes from no money. And Beth Behr, who plays the blonde, is the daughter of some famous business guy who lost all of his family’s money. In the pilot, the girls go from hating each other to becoming roommates – AKA things moved way too quickly.

At the end of the pilot, the girls sit on Caroline’s (Beth Behr’s character) horse that they stole back for her and discuss how they are going to raise $250,000 to open a cupcake shop together. Can you say random?

I thought it was cool how they showed how much money they have at the end of the episode. I’m sure they will continue to do that every episode. This was good thinking by writers/producers because it will probably take many seasons for the girls to reach $250,000.

My only problem with the show is that I am personally not a huge fan of the 30 minute network sitcom. I hate laugh tracks more than anything. If it’s funny, I’ll laugh. I don’t need to hear people laughing to laugh. There are no laugh tracks on movies, on cable, or on HBO. Also, whenever I see Kat Dennings, I see the 13 year old who wanted Samantha to plan her Bat Mitzvah on Sex and the City (I’m not sure if that’s a good thing or a bad thing). Other than that and the ultra annoying laugh track, it had it’s funny moments, but it wasn’t hilarious… and it didn’t suck me in.

The great thing about this show is that it is actually original. I have never heard of a show about two broke girls. This is a perfect comedy for a nation with a beyond horrible economy – especially for us fellow broke twenty somethings. Like I said, if I had nothing else to do or watch on a Monday night at 930, I would prob turn 2 Broke Girls on.

Ever since this show was announced, I have been very interested. But like everyone else, I knew it wasn’t going to be as good as it could be if it was on HBO, Showtime, or even AMC.

It’s a show about a bunch of sluttily dressed twenty somethings in 1963 – but on network television… AKA you can’t show nudity, sex, or even swear… What in the world would this show be about? I wondered that until last night.

The show stars a young girl – Maureen – who just started to work at the Playboy Club. On her first night of work, she is assaulted by a fat man who tries to rape her. While trying to fight him off her, Nick Dalton (isn’t that the guy from the Great Gatsby??) tries to save her. He is some big awesome lawyer/womanizer and a key holder to the club… but he is dating the head bunny. Anyway, Bunny Maureen (yes they all have bunny at the beginning of their names) accidently kills the guy with her heel when kicking him off of her (what is this? Austin Powers?).

We then learn the guy she killed is (was) the mob boss of Chicago… so Maureen heads to Nick’s house with him to rid of the body/blood. When head bunny Carol-Lynn arrives home, she finds Maureen and leaves Nick. Now, because she thinks something happened between the two (which it didn’t  – well at least nothing sexual), she is out to make Maureen’s existance as a playboy bunny miserable. OoOoO love triangle involving the mob. Once again, this would be way more interesting NOT on a network channel. The best part of the show was Hugh Hefner’s voice over at the end.

I thought it was alright. I watched the full hour, but I didn’t pay attention the whole time. Words with friends was more interesting… which is coming from a girl whose eyes rarely ever leave the screen during Pretty Little Liars or (my new obsession) The Lying Game. Maybe I’m pathetic? Maybe I lack an attention span? Or maybe it was just “eh?” Whatever it was, I really would like to get into this show. I will watch the next few weeks – but if it doesn’t get better, I don’t know if I’ll be tuning in anymore.

What did you think? Did you tune in for any other shows? What would us twenty somethings love? Stay tuned for more new TV show recaps on FTS.

Working Out in the AM vs the PM