There’s nothing stopping our girl Tina Fey from being out of the spotlight. Now that 30 Rock’s over she sure has a lot of time on her hands… and while I hope she spends the majority of that time writing a movie as good as Mean Girls, I’m happy she is starring in some movies that aren’t SNL-like. 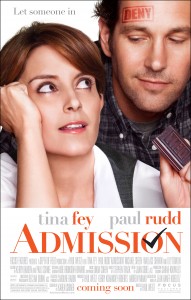 Tina’s latest film, Admission, is a full blown romantic comedy about finding happiness. Tina plays a Princeton University admissions officer who’s life is thrown a curve ball when a former college classmate (Paul Rudd) who runs a high school thinks one of his students is the kid Tina secretly gave up for adoption many years ago. Whoa. Long sentence. Drama overload. So much going on. Need to see the movie. You get the deal.

Oh, and Tina like sooo has a thing with Paul Rudd in this movie. And that is so hot. Check out the trailer here:

Admission hits theaters March 22nd. Will you be seeing it?

Now for the giveaway! 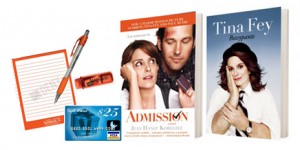 Enter using the form below by Tuesday March 19th at midnight. The winner will be announced March 20th. For extra entries, follow us on twitter @forever20tweets and like us on Facebook! Don’t forget to use #Admission in your tweets!

My Tablet Takes LA: How I Kept Up With Blogging On Vacation