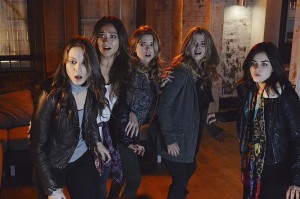 In the season 5 finale of Pretty Little Liars, Ali told all. Or at least she was supposed to tell all. But… SHE DIDN’T KNOW ALL. So we’re still left wondering WTF. Below you will find my thoughts on what we found out, what we’re still waiting to find out, and some of my theories on what’s to come. Join the conversation in the comments! All theories and thoughts are welcome.

What we found out last night:

Ali killed Ian. He was a creep, so it’s totally fine. Sorry bro.

Toby was texting Ali the night of her disappearance. But what did he want?! Why was he involved. She never said.

Spencer didn’t kill anyone. So why does Ali still hate her so much?

Mona knew Ali was alive THE.WHOLE.TIME. And Ali made her into the queen b(itch) she is now. How did Mona remember all of Ali’s makeover tips though? She didn’t write anything down. I would have grabbed my iPhone and started taking notes stat.

Jenna isn’t A (well duh, bitch was blind… do we really think a blind girl was causing so much gruesome problems?).

Ali and Ezra never fucked. Actually they never even made out. Ali really was just A BIG OL’ TEASE. Oh, and Ezra really does love Aria. Which makes no sense because he got pissed that Ali was flirting with him when he found out she was 16… but he started a relationship with Aria knowing she was 16. WHATEVS, RIGHT. Anyway, Ezra would literally die for Aria (literally) (see below).

CeCe apparently knows who “the girl who killed the girl everyone thought was Ali.” So does Melissa. And now Spencer’s dad does too. But is this killer the same person that threw the rock at Ali’s head? Probs not. AND THE MYSTERY CONTINUES.

Things we didn’t find out:

Well here are the first two most important questions:

1. Is Ezra dead? Please tell me no. Just say no. If Ezra is dead, I will just… I won’t be able to watch anymore. Even though he’s a creep ass pedophile, I kind of like him. When he came onto the roof, he tried to save the girls from the masked “A.” He said “I know who you are” and then got shot. Probably a bad move on Ezra’s part. Duh A is going to kill you if you say you know who they are. A can’t have anyone bringing him down (and yeah I’ve decided A is a man because who the fuck can jump from one building to another like it’s nbd?). While the girls pointed the gun on A, he fled. WHY DIDN’T THEY JUST FUCKING SHOOT HIM? Meanwhile, Ezra was dealing with a gun shot wound in his stomach. His last words before falling over were “it’s beautiful” as he starred into the sky like it was a fucking Oscar winning film. Basically, I really hope he isn’t dead. But he might be because he knew too much, and if they bring him back to life the show would basically be over. Unless he comes back with memory loss… but didn’t they already do that with Hannah? OR will they bring him back with his last memory being dating Maggie? Because that would be like The Vow 2.0 and it would be really sad.

Anyway. Ezra can’t be dead. Way too much build up for a let down. Right?

2. Is Mrs. D dead? WTF. This was soooo random. Last we saw, she was in the police station claiming to have JUST found out that her daughter was still alive. But now you’re telling us she left and got killed? Was it because she was supposed to be protecting the person who attempted to kill her daughter with a rock, and was no longer protecting them? I still think there is an alive twin involved who is NUTS which would explain the obsession with Radley and the unexplainable mass murderer running around all because some 14 year old bitch said some mean shit to people. I mean, as a whole this show makes absolutely no sense. Right? As for the twin — it could be Ali’s twin OR maybe Jason has a twin. No one has thought of this yet. Thoughts?

And the rest of my questions:

Why did Mrs. D bury Ali… alive? Did she really think Ali was dead? Did she know she was alive? Was she trying to kill her? AND when she repeated “what have you done?” over and over again while burying Ali alive, who was you? WHY would she try to cover up for someone who attempted to murder her daughter? I mean, she watched someone throw a rock at her daughters head and instead of reporting said person to the cops and taking her daughter to the hospital to try and save her, she took her to the woods and buried her with a shovel. THIS MAKES NO SENSE. The only explanation for this would be if it was another family member. Maybe it was Spencer’s dad… He was freaking out a bit… and he and Jessica do have a history (and a child… maybe even TWO children… #twinning). WHO KNOWS.

WHY is Noel helping Ali? What’s his secret(s)?

Why did Mona already have a creepy ass lair at The Lost Woods motel? Was she just OBSESSED with Ali? Like obsessed to the point where she had to take her place?

What kind of person pulls an alive person out of a grave and doesn’t call the cops? Oh right Mrs. Grunwald. The creepy woman from the cancelled show.

What’s the deal with Wren? And what’s his whole deal with knowing secrets about Ali and Radley?

Why did CeCe look so BAD? And is she really still friends with Ali?

How did Melissa randomly run into Toby in London?

Who killed Toby’s mom? I still think it was a Dilaurentis… Jessica, Ali’s twin, Jason’s twin… SOMETHING ISN’T RIGHT.

WHO IS THE REAL DEAD GIRL?

ARE THERE MULTIPLE A’S?

HOW LONG IS THIS SHOW GOING TO GO ON FOR?

When we saw Ali talking to Byron, the camera panned over to show a whole bunch of shovels… Did anyone notice that?

One of the PLLs are going to “spiral” with their boyfriend next season. Hmm. Well, it couldn’t be Emily because she likes girls. Could it be Toby and Spencer? One can only hope. Could it be Ezra and Aria? I don’t know. Didn’t they already spiral? I mean, Ezra might not even be alive. So could it be Hannah and Caleb? He IS coming back next season, but they’re not even together right now so how could they spiral? And when they say spiral, do they mean the couple will go on a bender and spiral out of control together (like on drugs?) or do they mean the relationship will spiral?

Lucas is coming back next season too. Is he A?

I GUESS WE’LL HAVE TO WAIT UNTIL JUNE 10TH FOR THE MYSTERY TO CONTINUE. LEAVE YOUR THOUGHTS, THEORIES, COMPLAINTS, ETC IN THE COMMENTS. LET’S GET A DISCUSSION GOING.

Thanks for following along with us this season. To be continued…

What Would Summer Roberts Do?

Who’s That PLL Edition: Ian, We Know You From Somewhere