Tuesday night’s Pretty Little Liars left us with a 90’s style cliff hanger: WHO shows up at the same place as the girls to meet Ali?! It showed the girls shocked that someone else was there to see Ali and then it faded to black. I was waiting for the “to be continued…” message to pop up at the bottom of the screen. Full House style.

We learned a lot this episode. But certainly not enough. However, next week #AliTellsAll and I CAN’T WAIT. Like, if we can fast forward to next Tuesday right now I would pretty much be okay with missing the drunken weekend that lies ahead. Here’s everything you need to know from “Unbridled” (like, what does that even mean?).

Why does Spencer have no memory of herself ever using drugs? Did she black out for an entire SUMMER? That must have been pretty horrible withdrawal. I picture her parents waving some memory-forgetting device at her Men in Black style and that’s why she doesn’t remember anything that happened the Summer. And why do none of her friends know she was on drugs? She WAS hanging out with them the night Ali disappeared wasn’t she? Weren’t they in that barn? And all those flashbacks to that Summer??? I’M CONFUSED. SOMEONE? ANYONE? Does this make absolutely no sense whatsoever or is it just me? Let me know. Thanks.

Also, that’s too bad Dean got fired. I was hoping he would replace Toby. Speaking of Toby… where is he? OH WELL!

Did Aria gain weight or is it just me? Because it’s either that or the 80’s off the shoulder shirt look isn’t working for her AND she is bloated beyond belief. Or is she pregnant? TWIST. 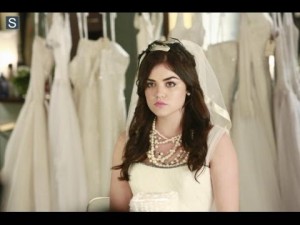 How awful must it be to break up with your older BF and then watch your mom act giddy over a boy close to your age… and then find out that she’s getting married to him. Can we talk about the creepy music that played in the background when Ella told Aria she was getting married? It’s almost like she doesn’t know if she really wants to. Does this marriage mean she will move away for good? Why do Aria’s parents think it’s okay to leave their kids alone? Wasn’t Mike depressed and crazy? What is wrong with these people?

I am noticing a trend. Hannah loves boys who are poor and need to be saved. I noticed this after we saw Travis working his 20th job on the show. OKAY WE GET IT. HE’S POOR.

Sidenote: Travis is not cute. I think he’s balding. And he should probably watch out because Caleb’s show got cancelled so he should be returning soon… right?

You’re still boring. And even though you broke up with Paige, I highly doubt Alison is going to date you. Sorry.

Bitch is cray. Why is she so MEAN all of a sudden? Like, where did that creepy batman like voice come from? Wasn’t she kind of fake nice before? Sure she was creepy (window watching, weird stories about Alison, etc), but not MEAN 24/7.

And if she hates Alison, why is she buying clothes for Alison? Makes no sense. Ugh.

Alison’s twin is the one in the grave and the reason no one ever knew about her twin was because she was at Radley THE WHOLE TIME. This could tie a whole lot of plots together. Wren, Radley, sneaking out of Radley, Toby’s mom, THE BODY IN THE GRAVE, etc. 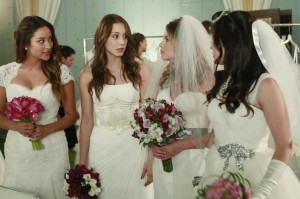 AND OF COURSE — Can we talk about the preview for next week??? Aria shooting a gun at a masked person while yelling ‘TAKE OFF THE MASK.’ What is this?

THOUGHTS? COMMENTS? SUGGESTIONS? Leave them in the comments.