Last night’s episode of PLL featured a floating Em, killer Manolos (no pun intended), a bird, and mommy issues. This is definitely going to be the season of the moms. Alison’s mom, Toby’s mom, and Hannah’s mom are all up to something (Toby’s mom in the past tense). Here’s what happened last night…

Mona takes the girls to the RV-lair so she can finally convince them that she’s on their side… but it’s gone (remember when Toby moved it last week?). Hannah and Spencer leave the empty scene in disbelief, but Aria and Emily stick around. As Mona gets in her car, a masked person who was hiding in the car strangles her, but since Em and Aria were still around, they help her escape. However, the masked person is still in the car and drives it away (because stealing a car is totally casual), after trying to run them over. Em’s shoulder got hurt pretty bad, but she does nothing about it because life and good health isn’t important to anyone in Rosewood. Duh.

Did Ashley Commit A Murder?

It’s becoming way too obvious that Ashley may have killed Wilden, SO I don’t think that’s the case. However, it does seem like she was there and might know what happened to him… or maybe she’s just evil and involved in the sick, twisted A-team. Perhaps A is forcing her to do things because she knows she stole all that money season 1… and she ran Wilden over. Maybe she was in another tricky situation where she was forced to kill him for her own safety. But a pre-determined murder? It’s doubtful. Who would plan to kill someone in the woods in Manolos? Not I. The real question: Did Ashley actually go to New York at all?

Bird Is The Word 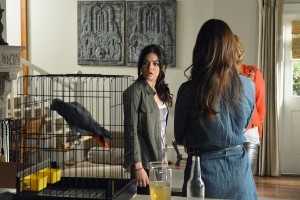 Alison’s mom gave Hannah Ali’s old parrot that she apparently was BFFs with in Georgia. Spencer is left with the bird and somehow deciphers a phone number from it’s incessant humming… seriously? HOW DID SHE HEAR NUMBERS? Also, that bird definitely has emphysema. And now A stole it and is feeding it another bird. Also, A was eating quinoa. She is such a healthy betch.

Aria decided to start learning self defense, which is a good idea because someone is and has been trying to kill her. So who is she into now? Her self defense teacher. Girl just cannot help herself. At least he’s, like, hotter and manlier than Ezra… and not way too old for her.

Spencer got rejected from UPenn and is now getting help with her college essay from Mr. Fitz (he is Ezra no more). She feels the need to write about her time in an insane asylum in her essay though, so she probably won’t get in anywhere. Oh well. Paige still wants Emily to go to Stanford with her, but Em’s now competing for the ONE spot left on the swim team with Shana — Jenna’s most-likely-evil sidekick. Her latest and most important swim meet didn’t go too well though as she hit her head and passed out in the pool. It was after that that Emily realized Stanford would be great because she would get to leave Rosewood and all of the East Coast. Like, Spencer: take a hint. Although, Caleb’s mom got pretty hurt by A in Cali, soooo I guess location doesn’t matter (bitch has a jet). My guess on college: None of them will get in. And they will be stuck in Rosewood FOR-EV-ER.

So we know Hannah’s mom is involved somehow, but what about Alison’s mom? She seems creepy yet happy and angry all at the same time. Does she know something? She does know that Ali used to hold her breath when she didn’t get her way, so is that how she got pronounced dead? Did she fake it by not breathing? …And Toby’s mom? Did she really kill herself or was she murdered? Why does everyone go to Radley? I don’t understand. Like, how is this all related? I guess we’ll find out soon.

Why is Melissa interviewing for an internship? Hasn’t she been out of college for a while?

Spencer recreated the lodge out of fruit and mozzarella sticks. Also, if Hannah used to be fat, why can she now eat mozz sticks and stay thin?

Is Paige going to die? Because she’s way too happy with all this virtual dorm room shit.

Sooooooo what do you think? Answer our questions in the comments because we definitely can’t.