This week’s episode has been deemed a ‘game changer’ due to all the crAzy stuff that happened. Spencer finds out Toby’s secret, Meredith turns legit crAy, and Ali might actually still be alive. Here’s how it all went down:

Hannah heads to an interview to find out that it was set up by A. Before she goes in, she has an Ali sighting (bitch is still alive – I’m telling you!), but she shakes it off and enters the front door. When Hannah walked in to find NO clothes and empty space, wouldn’t she leave immediately? You’re interviewing for a clothing store, Hannah. Why would you walk further inside when there are no clothes?! Anyway, after being chased around the small space by someone in a – you guessed it – black hoodie, she gets attacked by a plethora of naked mannequins followed by a text saying ‘next time you’ll be left faceless.’ Casual. A left a key there by accident, though, so she takes it and leaves it in Spencer’s hands.

Luckily, Aria sported no horrible outfits this week… but she still attempted to be trendy by having the flu. Meredith, who we thought was nursing Aria back to health last week, was actually feeding her drugs so she could search the entire house for Ali’s diary entries. While Aria was sleeping, Alison made an appearance in her bedroom also looking for the diary entries. She said there was a reason she ‘chose’ Aria… But what does that mean?! Ali also told her that she is really still alive (duh) and that Meredith is not to be trusted. She tries to take the doll in which Aria hid the pages, but ends up leaving it. Aria wakes up to find the doll where Ali left it… SHE REALLY WAS THERE! But she’s locked inside her room. Was this the work of Ali, Aria, Meredith, or… someone else?

Of course Aria falls back asleep with a makeshift knife (aka a broken mirror) in hand. She wakes up to find a CRAAAAAZY Meredith, who knocks Aria out and throws her in the basement. Hannah and Emily come over to look for her because she’s been MIA for quite a while since Meredith stole her phone (wouldn’t Ezra be worried as well? why hasn’t he brought soup over?) and they saw Meredith casually purchasing, like, 10 boxes of sleeping pills. They ALL end up locked in the basement and Meredith sits upstairs waiting for Byron. When he gets home she tells him the girls know ‘everything.’ He heads down to the girls, asks if they’re okay, and swears he didn’t kill Ali. Later on, he convinces Aria he really didn’t do it and she burns the pages from Ali’s diary… But is Byron really in the clear?

The big secret is reveAled to Spencer this episode when she catches Toby in the Act. Thanks to Emily, she gets the keys to Toby’s apartment and sets the place up for a ‘surprise’ romantic anniversary dinner when he gets home from ‘work’ that night.  The romance is ruined though when Toby breaks in to her house – which he thought was empty – and Spencer catches him in a black hoodie rummaging through her kitchen looking for the A key Hannah found. The realization that her boyfriend is part of the A team and has been trying to kill her and her friends (nbd), forces Spencer to break down. She even heads to his apartment to find out the lock was changed and she can’t get in. As she sits outside crying (bad idea, Spence), we see Mona inside having the couple’s anniversary dinner by herself. Where is Toby? Did Mona set this up? Is Toby only on the A team to save Spencer? Or is he still really evil? UGH. Question: Why do the Hastings make lasagnas on first anniversaries? Can’t they, like, go out to a nice dinner? 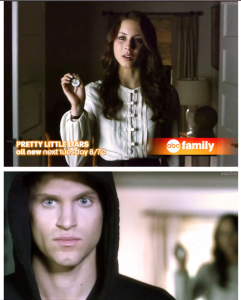 Hannah asks Emily to spy on Caleb, after overhearing a suspicious phone call. She follows him to a coffee shop to catch him meeting with (dun dun dun) PAIGE. Apparently Paige and Caleb are going to try to bring down Mona by finding her ‘secret lair’ (what is this? Austin Powers?) in hopes of saving their girlfriends. They’re about to get themselves in to a whoooole lot of trouble.

Sooo, I’m pretty sure Meredith is working with Mona. Why else would Mona have been watching Byron leave last weekend and who else would she tell he’s gone? Also, where did Meredith go at the end? Why wasn’t Byron the slightest bit mad at her? He must be involved too. UGH. In Byron’s flashback, we saw Ali with Melissa (throwback — where has she been?), meaning our next suspect is going to be … Melissa. Annnnd, as we know, Toby is evil… or might be evil… or was evil, but still kind of has a heart and part of him actually fell for Spencer (like beauty and the beast). I bet not though. He’s uglAy. At least we know he’s not the one in charge. As Mona said, ‘She is.’ BUT WHO IS SHE?! Ali? I bet… What do you think?!