Okay. Is it just me or is Pretty Little Liars becoming kind of like True Blood? In True Blood, you have this town taken over by a bunch of psychos with people murdering people left and right, much like the current plot of PLL. But, unlike PLL, you accept this plot on True Blood because it is a SUPERNATURAL FUCKING FANTASY. Pretty Little Liars is not a show about supernatural powers (umm, guys, remember Ravenswood? Yeah, that failed). And it’s not a fantasy (like, no I don’t want to be bullied via text message by someone who is trying to kill me). SO WHYYYYYYYYYYY ARE WE LETTING THIS GO ON STILL? WHAT ARE YOU DOING ROSEWOOD POLICE? EATING DONUTS? IDK.

This girl goes missing. Somehow the cops claim that they found her dead body, but they actually didn’t because she was alive THE WHOLE TIME. Before the alive girl comes home to surprise everyone and be like ‘lol, sry i’m actually alive,’ her friends are haunted via text message by someone watching their every move and trying to hurt/murder them and their families (nbd). During that time, there are a bunch of really elaborate murders and attempted murders (again – nbd). And then eventually – SURPRISE – the once-thought dead girl is back… but now her mom is dead and buried in the backyard. THEN she goes back to school and later that day, right after they announce the name of the dead girl who was mistakenly confused with the non-dead girl who pretended to be dead, her neighbor’s house literally blows up. Like someone blew the house up. Cars and trees and a destroyed house were on fire. NBD GUYS… NBD.

If that made no sense to you, then good. We’re on the same page. BECAUSE THIS SHIT MAKES NO SENSE.

I was honestly done writing about PLL, because I actually had no idea what the show was about anymore and I was bored. But now, it’s even more fucking ridiculous so here I am, ass on the couch, 11:30pm, writing a blog post ranting about Pretty Little Liars, an hour long drama for teenagers that airs on ABC Family every week, because I have a really cool life.

So. Let’s start with this: What is Pretty Little Liars even about anymore?

1. Bethany is Ali’s crazy twin sister who she didn’t know existed and that’s why someone threw at a rock at Ali- because they thought she was Bethany??????

2. Bethany is just a girl that Mona framed as Ali so everyone would think she was dead, and she could take over for good. Also, this murder will probably be pinned on Ali.

Other notable things to discuss:

Spencer: Why is Spencer’s mom all-of-a-sudden leaving her father? Also, she was trying to be gone before the dad came home.. But why was she in such a rush? She’s got like a solid season before Mr. Hastings gets home from work.

Emily: Don’t get me wrong. I love that Emily is a lesbian. I love that she has had multiple love interests at the high school. But can we NOT make Alison a lesbian too? There would never be this many lesbians in a suburban high school. This is just becoming not realistic. The two girls have a sleepover and then turn over to face each other in the middle of the night and start making out, and probably later scissoring? I mean… it’s just not… no. Not Ali. I mean even making the new swimmer a lesbian was okay, but now the new swimmer is apparently bad (figures) and she is basically Jenna’s stunt double… Not to mention, Jenna is also a lesbian because she dated Shana, who was also a lesbian. COME ONNNNNN.

…and none for Paige McCullers.

Alison: The new Ali they were portraying at first sucked. It’s almost like she’s a completely different person now… (cough maybe Bethany Young stole her identity and Alison was stuck in Radley until she escaped). It was great to see her balls weren’t completely cut off though when she referred to Mona as “Loser Mona” and had a slap fight with her. But how did a bitch slap lead to a gigantic cut across the cheek? And can we please talk about the sound effects in that slap fight? LOL. Also – the most important question – how did Mona edit a video on her iPhone?

Hanna: I really don’t like this new, boring, afraid Hanna. She literally has no balls. WHERE IS THE FUNNY, AWESOME HANNA THAT USED TO EXIST? COME BACK, COME BACK. Travis basically sucks, so maybe now that Caleb is back, the old Hanna will come back too. But, like, Caleb looks like he sucks now too. When did everyone start to suck? SNOOOOOOOOOZE. Also, when Hanna asked why Caleb was back he didn’t even have an answer. Embarrassed much? Your show got cancelled. SRY BRO. 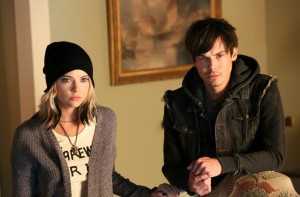 Aria: So yeah. I didn’t need to see Aria and Ezra fucking, but thanks for promoting statutory rape ABC Family.

So that was that. And now I am officially confused. WTF is going on??? Leave your thoughts in the comments.

Also – what is this shit that comes on after the second showing of PLL at 11pm? Who are these old people talking about global warming? Is this a reality show about a nursing home? What is going on? Did a ghost switch the channel on my TV to Current? Do I even get Current? 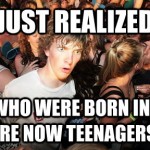 7 Things That Make Me Feel Old 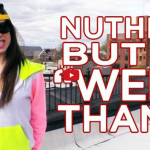