In the words of Aria, “Is it weird to be jealous of your mother’s love life?” Not if your mom is being whisked away to Europe by her gorgeous younger counterpart. Aria and her mother share a heartwarming moment where Aria gives her blessing and urges her mother to succumb to the passion of her new relationship. Will her mothers’ sabbatical from Rosewood leave Aria to drudge up more unwanted information on her father? I smell more daddy issues on the horizon.

The ever-present question continues to linger, what is Melissa’s involvement with the A team? Although she makes an appearance on last night’s episode, she’s already making excuses to disappear again (Possible Internship in San Francisco or London?). Hannah sees Melissa down at the police station, meeting with the new detective tackling Wilden’s case. She later claims it was to answer some questions on the murder but the encounter leaves viewers feeling suspicious.  Flashback to Garrett Reynolds anyone? We also discover that Detective Holbrook has an entire office wall dedicated to Wilden’s murder – Pictures of the liars, including Hannah’s mother are speckled across the board. The liars are suspects? Never saw that one coming. We are left with Melissa posing the same question to Spencer as Spencer once asked her sister. If Spencer had to choose between protecting Melissa or a loved one, who would she chose? It’s hard to determine what Spencer would chose – We know she is head-over-heels for Toby but we also must recognize that irrefutable bond that ties family together (No matter what the circumstances). You can already distinguish her inexplicable loyalty to Melissa when the other liars try to impugn her for carrying out A’s evil deeds. And where are Spencer’s parents by the way? Wasn’t Spencer just released from Radley? Bad parenting at its finest.

With each passing episode, Ashley becomes more suspect. Hannah and Caleb take on the role of detective in this week’s episode, snooping around Ashley’s belongings, hoping for some kind of indication that she was in fact in New York City. Hannah uncovers a note in her mother’s office that reveals her true location on the night of Wilden’s murder – Rosewood. To make matters worse, Caleb hunts down Hannah’s father for information, only to expose more incriminating details on Hannah’s mother. Turns out, Ashley visited her ex-husband on that night, asking for money. Mr. Marin denied her the funds and left her alone momentarily. He later discovered that his gun was missing from his desk. Coincidence? If Ashley is indeed the killer, will this revelation culminate in her arrest? She has already escaped prosecution from her money hungry sticky fingers. Will this finally be the moment where she is taken into custody? Or, in true Pretty Little Liars fashion, are we only being led to believe Ashley is the killer so we can be bombarded with a jaw-dropping unseen plot twist?

Spencer and Toby decide to break into Radley to revisit the scene of his mother’s suicide. Of course, they walk right in like it’s not a high-security mental institution. They find the room and window where his mother supposedly committed suicide. In the previous episode, Toby reveals information found in his mothers file from Radley that exposes the possibility that she may have been murdered. Before her death, she was recorded professing her love for her son and her desire to be a real mother-figure in his life. It seems extremely sketchy and leaves us wondering how his mother’s death is connected to the whole A plot. Toby gets emotional as he stands at the exact location where she allegedly jumped to her demise. They discover, however, that the roof jets out, making it impossible for someone to fall straight to the ground from that position. Toby declares that he “wants to know the truth.” Don’t we all…

With all the drama that plagues Rosewood, do we really need a plot line on Emily’s mother being a rumored abuser? Apparently someone contacted Family Services after Mrs. Fields was seen pulling on Emily’s arm at School, demanding that she get in the car after she discovered missing Hydrocodine pills. She is now under investigation as recent events make her look highly questionable to authorities – Emily’s hurt arm, the missing Hydrocodine, hospitalization for the Ulcer. Shit. Circumstances do look suspicious. Are all the little liars’ mothers going to be gone by the end of the season? We find out Emily’s father is now coming home – Hopefully to do some serious damage control.

Definitely the biggest eye-opener during last night’s episode was the discovery of Ali’s mask amidst a box of her belongings. The mask was a mold of Ali’s face, personifying her famous statement “That’s immortality my darlings.” Inside the mask was the name of the studio where it was fashioned. Naturally, they visited the studio, located in the middle of the woods, after dark, with the company of the exceptionally creepy creator of the masks. Why do the liars always encounter such eerie people? Remember the little boy in the doll store? I guess it wouldn’t be our favorite show without these impractical characters. Anyway, the artist explains that he was introduced to Allie after she responded to a modeling ad that he put in the paper. He goes on to describe how beautiful and perfect her features were and then gets distracted by Emily – insisting he will only answer their questions if she allows him use a mold of her face for a Medusa mask. The whole process is disturbing. 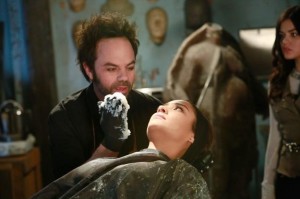 As he replicates her face, he tells the girls that Allie wanted masks for all her friends so they can look like her. She also was adamant about breaking the mold after they were finished. The big shocker comes when Hannah uncovers a mask of Melissa’s face in the back of the shop… which, let’s be real, did not look like Melissa at all. How could they tell?! And what does this all mean? Did Allie and Melissa visit the place together? Did one follow the other there? Why would Melissa want a replica of her face?

And Where the heck was Mona? We still don’t know who took her car…Can we trust her or is this all just a big set up again?

Umm… and where was that bird?

Until next week liars.

The 7 Stages Of Life After College