Last night’s season 4 premiere of Pretty Little Liars was both ridiculous and typical. While some questions were answered, many more were asked. At the end, I was hitting myself and screaming at the TV, as I usually do — I JUST WANT TO KNOW EVERYTHING/why doesn’t someone go to a different police force or something? I will never understand, but I cannot stop watching.

So… that was in the trunk?

A pig? You serious? I mean, I had a feeling it wasn’t going to be a person or anything worth caring about since that wouldn’t have been that much of a shocker… but a pig? Does the pig even symbolize anything? I am starting to feel like I’m back in 11th grade English deeming everything as symbols and themes and looking for the deepest meanings in the show. But anyway…

Because I still don’t know. She played us once. She could totes be playing us again. After seeing the trunk-pig, Mona crept inside the un-sunken cop car to ‘save Hannah’s mom.’ She then had the chip with the video on it… and she kept it for a while until giving it back to Hannah. That was pretty bizarre because WHY was she holding on to it? What did she do to it while it was in her custody? Is that video connected to the video that everyone in Rosewood is going nuts over?

Mona could actually be good though because 1. she’s receiving the A texts too (but wasn’t she before?), 2. she seems obsessed with Hannah again, like going shopping with her was making her wet (in other thoughts, HOW can Hannah afford Donna Karan? Did anyone catch this?), and 3. She spilled secrets/answers to the girls, such being that Mona put the cop car in Hannah’s garage, but didn’t pull it out of the lake, Shana and Jenna are lovers and are both afraid of Melissa, Mona doesn’t know who killed Ian, and Wilden and Melissa were both the Queen of Hearts on the party/death train… and now one of them is dead. To me, it seems that Mona could go either way. She could still be against the liars, but also clueless as to who the new A/the lady in black is… Who knows.

Does anyone else think it’s ridiculous that there is a lair involved? First of all, I keep waiting for Dr. Evil to appear and converse about Mona’s evil lair AND I keep picturing Laird from Girls. IT’S NOT FAIR. Oh and how about the fact that ‘lair’ and ‘liar’ are like almost the same word! Am I looking into this too much? Probably. Anyway, Mona’s lair is in a trailer park. How very poor of her. And how unrealistic is it that five well dressed little girls who look exactly like Mona, Spencer, Aria, Hannah, and Emily all live in that same trailer park? This town makes NO SENSE. Everyone is rich and then not rich at the same time — I’M SO CONFUSED.

And, umm, where did the lair go? And what’s wrong with Toby’s mom?

Toby’s mom has got something going on (to the tune of Stacy’s Mom)… and I want to know what. Toby’s mom totally came between him and Alison making out once upon a time… and now A claims to know what happened to Toby’s mom… and he is going to do whatever A says to find that out — even if it means driving the lair-trailer away from where Mona & Hannah hid it to where A wants it. And, umm, this is another reason why Mona might NOT be good. She might just be trying to get her lair back.

And what’s the deal with Alison’s mom?

First of all, she is not the same actress as the one who played her in season one… AKA she’s not as hot. But maybe that’s like menopause. Nevertheless, she’s back and more evil than ever. Like, when she was standing in Alison’s old room staring at Spencer through the window — I lost my shit. What a scary woman. And why is she back? It’s not like Jason is there. She’s just creepin’ in Rosewood, by herself. And she’s happy again! Perhaps she knows that Alison is alive. Or… perhaps she is A. Or at least on the A team… Whatever that is now. Oh Mrs. D, you are going to cause a whole lotta problems aren’t you?

Why did they feel the need to give us a heart attack with Aria’s day dream?

I thought it was real. 100% real. Because only in Rosewood would a fat, old principal yell at a hot teenage student for ‘SLEEPING WITH HER TEACHER.’ And only in Rosewood would that same teacher be brought out of the school in handcuffs for statutory rape while the students half watch/half ignore because that situation is actually quite normal. Because of Aria’s daydream she decided – yet again – to really break it off with Ezra. Like, it was off – but now it’s really off. She’s going to see other people! So, like, Ezra will prob get back together with his baby momma because that’s the way the world works. You are his student Aria. And he is a teacher at your school. And he has a child. And he’s not even rich (well, his family is but he chose not to be). MOVE ON.

Yeah, I was baffled too. And now she wants Emily to run away cross country with her to decorate her apartment. If only Emily wasn’t too busy trying not to die, she could maybe get into Stanford too. In other news, Paige lost like a lot of weight. Is she eating? That’s probably the only reason Emily agreed to go to Stanford with her. This all feels like The OC. You can’t make plans to go away to college with someone without getting in, DUH.

What were the girls wearing to Wilden’s funeral?

So, umm, Wilden’s dead and the girls showed up in sequins and sheer dresses to his funeral. Appropriate, right? Especially when they’re trying to get into Wilden’s casket to steal his cell phone (aka the evidence to bring Hannah’s mom down) and NOT BE SEEN. They’re, like, asking to be seen. If I was that hot new cop, I would gravitate towards the cute prosties too. 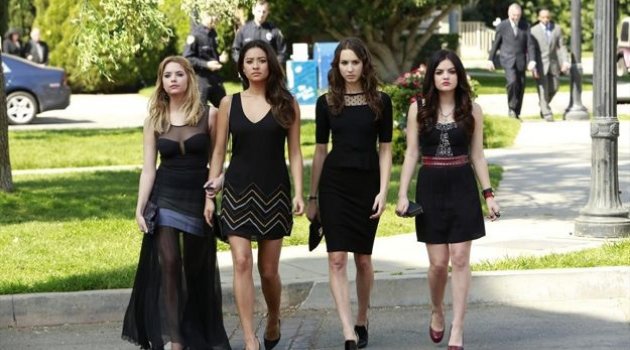 Sooo, whos the betch in black? Well… if I’m going to HAVE to put money on it, I’d say it’s Alison! Did anyone else have a Batman flashback when the lady in black took off the veil to reveal the mask which is half okay/half burnt to a crisp? She prob flips a coin to decide whether she’s going to side with the liars or with Shana, Jenna, Melissa, etc that day. UGH, can’t she just cave and tell everyone she’s still alive?

So yeah, I don’t even know what to say. I still think the liars are liars and are lying to us. I think they killed Alison… but then again, if that’s the case Spencer must be a realllllly good actress because she is just so convincing that she misses her friend. I DON’T KNOW WHAT TO BELIEVE. What do you think PLL-ers? WHAT DO YOU THINK?

10 (Affordable) Things To Do This Summer

Throwback Thursday: Guys From The 90’s We Still Love