We last left the liars in November (seven months away from their high school graduation!) with many questions and also many theories about WHAT is happening in Rosewood… 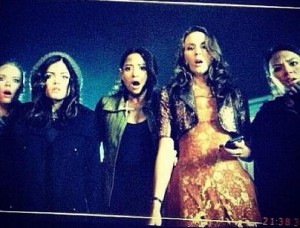 Here’s a little recap of where we left off:

The season finale revolved around a party being thrown in honor of Spencer’s return from Radley… However, it was all a hoax to get the liars in one place so ‘the bitches’ could (in the words of Mona, Jenna, Shana, and Melissa) ‘get what’s coming to them.’ Spencer, the smart betch she is, was one step ahead of the game though and filled all the girls in on the secret, prepping them for what was to come. Things didn’t exactly go as planned though when someone (or some people) set the party-house on fire, trapping Hanna, Aria, Emily, and… Mona.

While they were trapped and inhaling smoke, we found out that Mona had no idea who red coat was either… and was basically just as blind as the rest. Their blindness wouldn’t last very long though, as Spencer (who was camped out in the woods waiting for Red Coat’s plane to arrive) watched Alison in a red coat walk out of the plane towards the burning house. She then watched that same Alison pull the four girls from the fire, saving them. While doing so, Hanna and Mona saw it was her too. Therefore it was revealed — Alison is not dead!

In true 1994 fashion, PLL left us with a really intense cliffhanger at the end of the episode: The four girls screaming after opening the trunk of the car Hanna and Aria pushed into a lake. The same car that has somehow overcome sinking and water damage and still plays videos on a loop (the video last played footage of Jenna and Shana saving Wilden in the woods… what was that about?!). It left us wondering who is in the trunk? Or WHAT is in the trunk? Hopefully we’ll find out tonight!

Also, the hand. We can’t ignore the hand. It was the hand we’ve seen before reaching into the air from the ground. This time though we saw it being helped by someone in a red coat, which we now believe to be Alison… but, umm, do we really think she’s the only one rocking a red trench in Rosewood? Because I highly doubt it. Also — what will happen when it gets warmer or colder out? Red coat doesn’t look like it can protect a person from treacherous Winter temps and snow… and it certainly would be way too warm for Summer. Does RC (red coat) have a back up plan?

For a more thorough recap of the season finale, read our official one here! Now let’s get down to business…

Before we dive into who actually did it, we do know that Toby is going to be framed for it, as someone dressed in all black knocked him out and left the lighter next to him, making him look like the arsonist. The season finale made Toby re-appear as a good guy who was just trying to help Spencer by joining the A team (even if it meant losing her), so it sucks he’s going to get framed yet again… but oh well.

So could it have been Jenna, Shana, and Melissa who started the fire? Or just one of them? They were all supposed to be at the party. We know that Jenna and Melissa have been suspects before… Shana is new to the mix, but by the looks of her and Jenna’s intimate meeting in the season finale AND the footage of her helping Wilden, she seems to be very much apart of everything. She probably has some past with Alison too, which will hopefully be shown in a flashback (I love the flashbacks).

If it wasn’t those three, I’m kind of lost. Could it be another red coat? Or maybe it was Alison. Maybe she’s trying to play both sides, completely messing with everyone. Sure, she saved the liars,but maybe she’s controlling the liars, Melissa, Jenna, Shana, and Mona all at the same time like they’re her little puppets.

I’ve got a couple theories on why Alison might be out for revenge. Here they are!

My first theory: The four liars thought they killed Alison and buried her, but they actually buried her alive (hence the hand coming out of the ground) and she never died, so she is now out to get them. If you get a chance, watch the first episode of the entire series. That barn scene seems extremely rehearsed — kind of like their scene from the last season finale where they’re getting ready for the Hastings’ party OR the night they lied about the lake house. The last scene of the episode is also extremely sketchy. They meet Wilden and he is on to them — and the liars think they know why. They never refer to it as ‘the Jenna thing’ though, but that wouldn’t have even mattered in the murder case. So, like, they sooo did it. They are the liars, right? They MUST be lying to us (the viewers) too. Watch the video here:

My other theories: If the above isn’t the case, perhaps the liars did try to kill Alison — they just don’t remember because they were too drunk… Remember when Emily thought she killed Ali? Yup. OR maybe someone else tried to kill Alison and now she’s trying to get revenge on them via the liars. In a weird way, it sometimes seems like A is helping the liars… but maybe that’s just me being way too optimistic.

No idea. It seems like that is the case… but I’m still on to that crazy betch. Mona told the liars that she first met Red Coat when she was in Radley. She said RC wore a mask, so Mona never knew who she was, and she only agreed to work together because RC said she would help her find a way out of the place. I’ve thought long and hard about this, because like how does one get into an insane asylum wearing a mask? But perhaps RC was the higher power who got away with murder (literally, probably) in Radley, thanks to either E. Lamb or Wren. If that’s the case, maybe that will tie that plot line back in because, umm, what happened to it? The one thing that messes all the theories up is that Mona was definitely working with a ‘higher power’ prior to her stint in Radley. But if she really didn’t meet RC until Radley, then who was it?

What’s the deal with Mona’s team and the ‘other’ team?

As for Jenna/Shana/Melissa/Wilden, they are clearly on one team together. Maybe they were on Mona’s team — but chose to rid of her after she failed getting the liars where they were supposed to be? Or maybe they’re all working for Alison without knowing it. One things for sure, though — Jenna/Shana/Melissa were all about hurting/killing the liars… But why? Not to mention — Mona was too. But now she’s all BFF with them? I mean, come on. Why did the liars trust Mona enough to bring her with them on a joy ride away from the fire? She tried to kill them too — She was up to no good in that house too! Something isn’t right.

What happened in Radley before Spencer left?

This was not covered in the season finale. Like, what’s the deal with Wren? And that ‘E. Lamb’ dude? And how and why did Spencer leave Radley? What made her choose to leave after she was given the map to find her way out?

Who is in the trunk?

Maybe it’s actually Alison… but I doubt that. It could be CeCe, Jason (someone was trying to kill him too!), Hanna’s mom, Caleb, Caleb’s dad, the possibilities are endless! Maybe it’s nothing. Maybe it just looks like it could be something bad.

We last saw the pair canoodling in the stairway of the high school saying their goodbyes… but then Ezra became Aria’s English sub… So that was weird. Who thinks that break up will last? NOT ME! And what about Malcolm? He could totally still be A.

Answers We Already Have

Check out The Hollywood Reporter’s article on last night’s PLL celebration at the Paley Center. Some questions were answered at the event — and many spoilers/new story lines were revealed — one major plot line being… the end of Haleb! Well, kind of. As most of us know, Caleb will be leaving PLL to star in Ravenswood… BUT the pair will not be splitting — they just won’t be staying together (confusing, right?). I guess we’ll have to wait and see!

SO, what do you think fellow PLL-fanatics? What are your theories? What’s in the trunk? Who started the fire? What’s stirring in the A-pot next for the liars? Tonight’s the night. Hopefully our questions will be answered. For now, sound off in the comments!

Dating Dilemmas: 7 Things You Will Fight About When Living Together