Valentine’s Day. Ugh. I cannot think of a single day of the year that is more anxiety inducing. Whether you’re single, hooking up, or seriously dating, if you’re anything like me you’ve had expectations that have failed to be met…by a long shot…more than once.

In high school, I had a serious boyfriend (like we dated for 5 years serious – when we broke up people referred to me as “nearly a virgin”). One Valentine’s Day, I presented this boyfriend with a beautiful homemade (ok fine it was Pillsbury) sugar heart shaped cookie with pink frosting. I outlined the heart and wrote “I Love You” in cherry Twizzlers (which I personally find revolting but it was his favorite). When my boyfriend came over, you know what he had for me? Nothing. Zip. Zilch. Nada. I was personally offended. I bit my tongue and asked if he wanted to watch The Notebook to which he responded – No. (But why??) That’s when I started to huff and puff and probably cry (I can’t quite remember, but it’s a safe assumption). He didn’t understand why any of this was such a big deal – after all, Valentine’s Day is a Hallmark holiday. Still, my feelings were hurt. Maybe (definitely) I overreacted, but I had spent so much time thinking about him that I just wanted some sort of indication that he had thought about me too. Anything. Really.

Ohh college. The time to be single and mingle right?  That’s what I thought, but apparently my roommates didn’t get that memo. While they were being wined and dined, I was sitting at home in sweats binge eating Easy Mac and Oreos while watching American Greed on CNBC. I wish I could tell you a funny anecdote about my roommate coming home with her boyfriend and finding me passed out on the couch with a Kraft noodle on my face, but I’m a bad liar and Valentine’s Day always ended up being anticlimactic (see what I did there?). As long as I knocked myself out before sexy time commenced on the other side of my bedroom wall, I was golden. I would like to mention though, that spreading love on Valentine’s Day can (and should) go beyond your significant other. So this year, take a second to think about your single lady friends and do a little something. Lunch, coffee, a bottle of wine to drown their sorrows later in the night…you know, that kind of thing.

Before I get into this I want to make one thing clear – acknowledging the existence of Valentine’s Day does not mean your current hook up will think you’re trying to get married. At least most of the time.

So let me tell you about the worst person ever.

I had been making out / sleeping over (innocently) / going on dates with this guy for a month. We talked all day, every day because he initiated it. Two weeks before Valentine’s Day he showed me this card online, which personally I find to be hilarious: 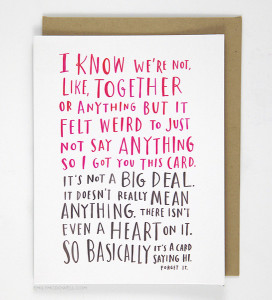 This led me to believe that we were going to do something on Valentine’s Day. Maybe exactly what we were doing right that second (win-ing and Netflix-ing – in case you were curious).

February 14th rolls around and this guy Gchats me “Happy Thursday!” What. Are you effing kidding me? No card, no Netflix date, nothing. So everyone (anyone?) reading this post – don’t do that. Don’t tee up Valentine’s Day two weeks in advance and then act like it’s “just Thursday”. Buy the damn card – here’s the link: http://emilymcdowell.com/collections/cards/products/141-c-a-card-for-when-youre-kind-of-together-but-its-not-a-big-deal

I also forgot to mention that that particular Thursday was my first Valentine’s Day as a working professional. If you have yet to stalk me on LinkedIn or read my bio (shame on you), I work at a tech company called WeddingWire with 200+ girls who are all seemingly in very VERY serious relationships. The office looked like a freaking funeral home from all the flowers that were delivered that day. Not kidding – 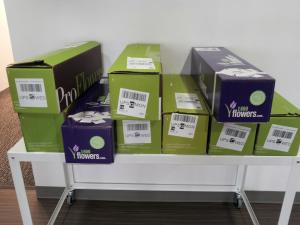 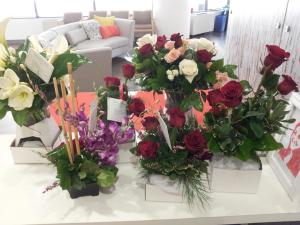 Thankfully the next year it snowed on Valentine’s Day and I got to work from home. #blessed

So what’s in store for this year? Boyfriend (I have one!!), if you’re reading this (which you should be to support my new blogging hobby) know that I pinned your gift the first week of January, ordered it the second week, and would really really like to see Fifty Shades of Grey with some buttered popcorn and Sour Patch Watermelon candies. Don’t forget to preorder tickets 😉

Patricia is a Brazilian turned American (passed the citizenship test - hooray!) twenty-something who has personally survived 3 separate quarter life crises. She graduated from the University of Virginia in both 2011 and 2012 (learning is her favorite) and has since been working at WeddingWire outside of Washington DC. She is in no way, shape, or form a wedding planner although she could successfully plan one if she wanted to (she doesn’t). Patricia is an adept stalker of all things social media, but has a personal interest in career stalking and development (surprisingly really fun). Patricia invites you to follow her on Twitter @PatriciaGL88 (though she rarely ever tweets unless she’s angry at customer service), but encourages you to connect with her on LinkedIn instead. 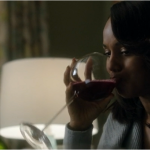 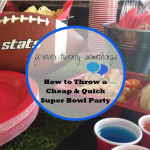