Seriously, how rude are people? My inspiration for this post was brought to you by your local Target. This is how my Friday night went down.

To my dismay, I noticed a delicious looking fruit cup in the produce section of Target. A delicious assortment of fruit at Target, stop it. It can’t be. A women to my right was pushing her daughter in an over-sized shopping cart. You know, the ones were it looks like the little kid is driving a car.  She stopped her Mack truck of a cart right in front of said fruit cup. I noticed she was looking at something further down the aisle, so I quickly (and carefully) stepped in front of her cart so I could reach up and take a closer look at the rainbow assorted mixture. I distinctly made a point to not bump into her, her obnoxious cart or her surprisingly cute daughter. As I’m sure you can guess, confrontation ensued. Just as I’m taking a closer look at my precious cup, she screams “Excuse You!” and pushes her cart, junk food and all, towards the women’s clothing section.  Without hesitation I place the cup down on the shelf and yelp “Ya, Excuse you.” She snaps her head back and says, “Ya, I have a child!” Immediately I’m pissed by her excuse for her over the top “Excuse me” comment. So I casually reply with an attitude filled, “Ya and.” She didn’t like that response very much and takes off for the checkout line.

Now I’m pissed, confused and uninterested in the mysterious fruit cup. Really lady? You just single handled ruined my Target shopping night. How dare you!? I was immediately tense, I mean hello, I was just verbally assaulted in the produce section of a suburban department store. Someone call the police. Actually, someone get me a glass of wine the size of my head.

This may be hard to believe for some but I absolutely hate confrontation. My high school experience was a giant misunderstanding (in my opinion) and more often than not, girls wanted to confront me. In the hallway, at an outdoor concert, in a dark dining room at a house party, in my driveway. You get the idea, fucking everywhere. So, one would think that I “asked” for it which would imply that I liked it. Correction: I absolutely loathed it and still do. Once confronted, even when innocent, I feel nauseous almost instantaneously, my wittiness diminishes (damn it), and I feel flush and sweaty. Just ask my fiancé, my palms sweat a lot but I digress.

After my encounter with the angry mommy-monster, I realized just how much I hate rude people. I, very obviously, hate them at Target, in the car, at work, and really, just about anywhere. What’s your deal? I know the common thought is, Jesus, go get laid you psycho! But seriously, what is their deal? Are they just rude all the time? Did their mothers pride themselves on handing down and cultivating the rudeness trait in their offspring? Do they wake up in the morning and say, “today is going to be great day to be a rude, arrogant, intolerable, bad-mannered scumbag of an asshole”? Or are they just blissfully unaware of how offensive they actually are?

I’d like to think that rude people know that they are rude and it’s something they are working on, but after my encounter with the cart-pushing, insolent mega-mom, I really think, that rude people think that they aren’t the rude ones. That in fact, EVERYONE else around them is, which causes them to act irrationally, bitch-y, and vulgar. Now, I’m not saying I’m perfect because I’m definitely not. But, as an extremely self-conscious person, I am so painfully aware of how I come off to people. If I am even slightly rude to someone, I immediately feel terrible and apologetic, even if I have ever right to be rude. Because sometimes you do, but that is a completely different point. Maybe rude people seem so impolite to others because they are flawed, they are self-centered and unaware that they are in fact the impolite ones.

I’m certainly in no sort of position to judge others on their flaws, because my flaws are sometimes blindingly obvious, but damn people, lighten up. The sun is shining, you are alive, and you have the means to shop at Target with your daughter. So as much as I want this post to come off as a giant FUCK YOU to rude people, I’m just asking you to reevaluate yourself, your reactions and your priorities. Don’t be so quick to fly off the handle. Don’t be so jaded and automatically assume that everyone is a rude asshole, unless of course they are. Ya, Target lady I’m talking about you, you’re fucking rude.

And no, I’m not preggers and I don’t have a kid at home. And for all of you, who actually know me, and thought that it to be true, in the words of Stephanie Tanner, “How Rude”. 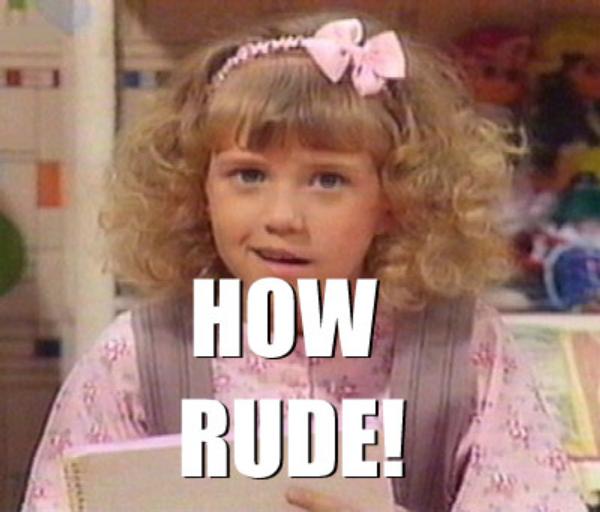 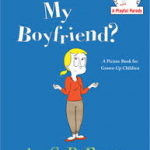