Welcome back, it’s been a week for us, but only a few days for our favorite college kids. Last week we lost Zayday, found dead bodies, and witnessed a surprising Gigi Reveal. After tonight I may never look at “it’s the great Pumpkin Charlie Brown” the same way again. Tonight revolved around dead presidents, found students, and one character is starting to look even more guilty.

Halloween time: It’s no surprise that Chanel’s fundraiser includes; Maroon 5, The Shining maze, artisanal pumpkins, Jackie O costumes, dead wives presidents and two Fergies. Kudos to Dean Munsch for using the opportunity to finally shut down the campus, leading to an impassioned speech by Chad to save the “Sluttiest night of the year” while giving shout outs to JFK.

“There’s the door bitch!”:  Chanel #6 is everything and by everything I mean evil. From plotting with Chanel #5 and Candle Vlogger to backstab Chanel in the elections to giving more crazy eyes and face than any character on TV, something tells me she’s a firm candidate for Red Devil.

Spoof time: Chanel finally gets arrested for the death of Ms. Bean and ends up in prison for a hot minute. It’s no surprise that this week the show takes on Orange is the New Black, complete with a Laverne Coxx lookalike. Thankfully Chanel #3 and Predatory Lez are there to bail her out in time for the fundraiser. Thankfully she was also able to get back at Chanel #5 for trying to steal Jackie O.

Adult report: Tonight’s episode was a little light on the adult action. Save for Dean Munsch and Denise trading Chad stories (boy gets around) to Wes and Gigi sharing salads and getting caught by Grace. The adults weren’t much help either when it came to searching for Zayday and the Red Devil ended up attacking them.

Chanel #5: We need to talk. Girl can complain, but for some reason she’s not willing to ditch Kappa. Needless to say, it’s funny how the one half of her “Eiffel tower” that she doesn’t pick ends up dead. I don’t know about this one, but if the girl’s willing to bake toenail cookies, you can bet she’s up to way more.

Zayday is back: Proving she’s no Pretty Little Liar, Zayday returns to Kappa just in time for the election. Girl survived the Red Devil, his/her lair and is still in the running for president? Something tells me that this has a lot to do with the killer’s identity.

Reveal: Continuing to give us WTF-Whiplash, Gigi was once again given more depth as she conversed with none other than the Red Devil. Talk about crazy, I’m more confused in these few episodes than I was in 5 and half seasons of trying to figure out who A was.

That’s it for this this week, next week we conclude Halloween and hopefully we’ll find out what else Gigi is involved in as well as the outcome of the presidential vote. Something also tells me that we can expect more death next week, fingers crossed it’s  a main character like we were promised. 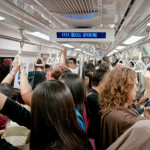 6 Struggles Of Being A Subway Commuter

7 Reasons Ice Cream Is Better Than A Boyfriend