When I was in 8th grade, my “Social Studies” teacher asked me if I wore a new shirt everyday. I knew I didn’t (or at least I was pretty sure I didn’t… since I did own Abercrombie’s entire Fall collection for some unknown reason). Anyway, I thought it was pretty awesome that he thought that. So after this, I continued to (have my parents) buy myself clothes on a regular basis.

High school was an untrendy and unoriginal whirlwind full of label branded shirts, Coach bags, Uggs, and lone pairs of baggy, NOT skinny designer jeans. College, however, opened me up to a whole new world full of less expensive trendy clothing (hello Forever 21)… and Nordstrom. Before I knew it, hundreds and thousands (hopefully not more than that) of dollars worth of Abercrombie, Hollister, and American Eagle shirts and pants were pushed in to the way back of the drawers under my bed at home. These label branded clothes would stay under these drawers for the next four years collecting dust until I finally rid of the unfashionable, unoriginal, overpriced items.

Forever 21 really blew up my freshman year of college – which was good because 1. the country was about to go into a horrible recession, 2. my parents were, like, not buying me clothes anymore, and 3. I had no money saved except maybe some lose change in one of my 5 untrendy Coach bags. Anyway, Forever 21 started opening in malls all over, throwing it’s low prices and trendy clothes in those preppy, label obsessed stores’ faces. Girls everywhere started ditching the unoriginal polo and dressing like their own person. Despite the beginning of this long awaited “style change,” people were still dressing kind of like they did in high school minus multiple moose, eagles, and seagulls(?). If you look back at a college students’ Facebook pictures from 2006-2007, you will spot people wearing horrible, little tank tops, light and baggy bell bottomed jeans, and the worst one of them all: Uggs. Freshman year was certainly not our most trendiest time.

Sophomore year furthered this “style change,” and soon enough, I discovered that although Forever 21 had a larger, cheaper, more colorful selection of clothing I could wear both out AND to class, the items were not only cheap – but they looked cheap. Sure, you could (and still can) find a few good buys after spending approximately two hours in the store – BUT who always has time to do that? After this realization, I discovered Nordstrom – a store I am now a regular at.

After purchasing quite a few NICE items of clothing, I once again found myself broke and sick of all my clothes. It seemed I was always complaining of “having no clothes” when I couldn’t fit anything else in my closet and I couldn’t shut any of my dresser drawers. I then found myself heading to LA for a “semester abroad.” There, I found XXI – the “high class Forever 21” – and people who were actually stylish. No one wore Uggs. No one knew what The North Face was. And guess what??? I didn’t want to know anymore either. So, I learned to walk in heels as best I could and literally started purchasing new clothes on a weekly basis. Jeans from Beverly Hills consignment shops. Dresses from the 3 floor Forever 21s/XXIs. Jewelry from anywhere and everywhere. Sure this didn’t last long. I had to move back home… and I suddenly ran out of the money I never even had in the first place… But let me tell you – it was all downhill from there.

Everything seemed so solemn when I moved back home. It was colder. Not as sunny. People were wearing North Faces rather than cute trench coats. Everyone had the same bag. And people were still wearing those damn Uggs. I tried to make up for my sadness by shopping – but not only was I completely broke… The clothes just seemed way better in LA.

That’s when it happened. I went back to college for my senior year to find Urban Outfitters had opened only a 5 minute walk away from my house. Yes – that’s right. Urban Outfitters in Ithaca, NY. Who would have thought? At first, I couldn’t afford shopping there – and only there – on a regular basis (let’s face it – I still can’t)… but I made it a point to shop there and other boutiques as much as possible because once an outfit went on Facebook, it was done… and pretty much almost all of my clothes would go on Facebook. I also would forever never be able to get rid of my shopping fever thanks to LA.

After I started making money post-college with an actual salary, I lived at home and could actually afford buying clothes, accessories, and shoes. Soon after this, I decided I had enough money to get an apartment (as you can see – I don’t always have the best judgement when it comes to money)…. not realizing that this would mean I would actually have no money to buy clothes.  Thank god for credit cards.

But I couldn’t keep charging things to my credit card with no money to soon pay it back within the next month (I’m not THAT bad – believe me). So, I had to figure something out.

It has taken a while to get used to, but I now only buy clothes on occasions and before I purchase anything – I have to ask myself if I will wear it again. For instance, this New Years is going to be expensive just to go out… and buying a dress would make it that much more expensive. I went through my closet and found a dress I had never even worn before. It is perfect for NYE and now I don’t even have to buy a dress.

If you’re like me, go through your closet and find items. Dress them up with different accesories and shoes – and there you have it: a new outfit! If you’re a true fashionista, then you can definitely handle this. Just be thankful you aren’t wearing polos and light, boot cut jeans out anymore! 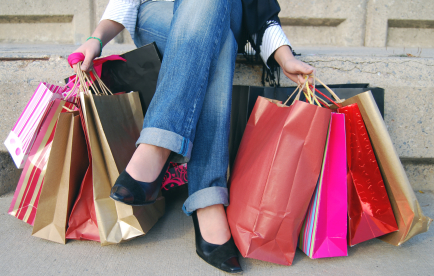