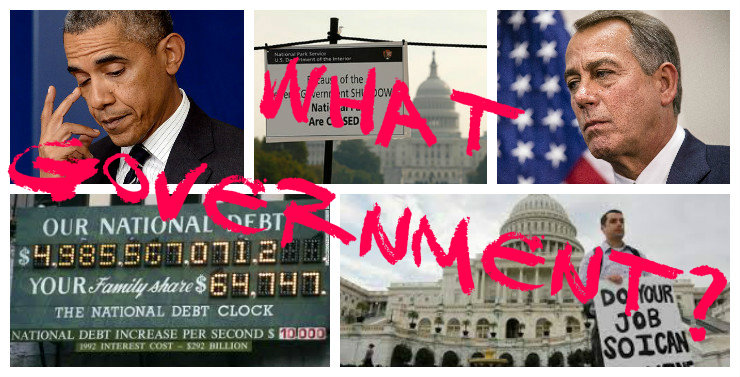 Welcome back to So…That Happened: Your Weekly News Round Up where, likex ABC Family airing Hocus Pocus at midnight on a work night, we systematically kill your will to live. There’s only one story this week: Sinead O’Connor’s open letters to Miley Cyrus, so get ready for some juicy celebrity gossip!

lolz just kidding. The government shut down and nothing this week is good. Let’s start at the beginning, Oceanic Flight 815 style.

Once upon a time, there was a Tea Party Crazy Person named Ted Cruz.

He and his Terrible Ten, a bunch of suit-wearing white guys and She-Makes-Me-Ashamed-to-be-a-Minnesotan Michelle Bachmann, convinced House Majority Leader John Boehner to tie a controversial provision to defund Obamacare to a routine spending bill.

Since the government’s fiscal year ends on September 30th, passing this bill was especially important. But by adding this provision, House Republicans basically set Congress up for disaster.

Some other stuff happened with Ted Cruz and a filibuster, but eventually the bill passed the House and went to the Senate for approval–which everyone knew the Senate wouldn’t give. It was at that point that we, as a country, realized we might be up shit creek.

Suddenly, the internet starting to freak out for real.

As expected, Senate Majority Leader Harry Reid stripped the bill of the Obamacare provision and sent it back to the House. Unfortunately, it was already like 11:59pm on Monday, way too late for any meaningful negotiations to happen. The House added a new provision, this time attempting to delay the implementation of Obamacare by a year. This really pissed off the Democrats and President Obama.

Suffice it to say, the Senate did not approve the bill. Cue no more government. Collectively, we groaned.

Cut to today: we’re on day four of the shutdown. 800,000 federal employees are out of a job and countless services have been cut. Meanwhile, in Congress, not a lot is happening. On Wednesday, Boehner and the President met, though they failed to come to an agreement. Obama has said he will not negotiate on the Obamacare issue, especially while the Republican House continued to hold the country “hostage.”

He’s called on Boehner to allow a vote on a simple bill to restore government funding and end the shutdown, but Boehner is under pressure from the Republican “extremists” not give in to the President’s demands. For now, it looks like those extremists are winning. Sorry federal workers and people who rely on government assistance to survive. Looks like you’re going to be stuck in the middle of an ideological war for the foreseeable future!

Does anyone else feel like Congress is made up of a bunch of whiny children who refuse to share their toys?

So, that’s the shutdown story. But wait…things could get so much worse! OMG how? Well, we could hit the debt ceiling.

A bit of back story on this: a long time ago, someone thought it would be a good idea to institute a law limiting the amount of debt the US can incur. Problem is, the US is wildly in debt. Like so in debt the numbers have ceased to mean anything.

The debt limit exists (sort of) to help the US control it’s spending. Except it doesn’t really do that. Recently, it only seems to create problems. For example, in 2011 Congress delayed raising the debt ceiling, which led to a downgrade in US credit rating and a significant drop in the stock market. Defaulting would be a really bad thing.

We will reach the current debt limit on October 17th. At this point, Congress is poised to further break America.

What happens if  Congress doesn’t raise the debt limit and US defaults? Funny story: no one really knows because it’s never happened before. What we do know is this: first, the country will run out of money and we won’t be able to pay our bills in full and on time. This is because the US Treasury has a fairly huge gap between what they take in (on taxes, etc.) and what they spend. When we hit the debt ceiling, the Treasury will no longer be able to take out loans to make up the difference. Interest rates could rise, government services could be cut, and the economy could tumble headlong back into a recession. Don’t panic yet, but it could be like Great Depression bad.

And unfortunately, there’s no end to this mess in sight.

So, now that I’ve filled you with terror, here is the real question: how is the government shutdown going to affect you?

Most obviously, if you work for the government, your paycheck might be delayed. Or it might never come at all. Who knows.

If you’re planning on going abroad and you haven’t gotten your passport, you’re probably going to have to stay at home for the time being.

On the subject of traveling, cancel your plans to visit National Parks, museums, and the National Zoo because they will all be closed.

Families that rely on the Supplemental Nutrition Program for Women, Infants, and Children (W.I.C) could lose their benefits, meaning pregnant women might have to eat pretend peanut butter for awhile.

Remember last flu season when it took all of your energy just to sit in the back of your mom’s car in a Target parking lot drinking cough syrup? Get ready for round two because the CDC’s flu shot program has been cut.

Oh yeah, and I hope you’re okay with getting food poisoning because the FDA has stopped all food safety operations (except in emergency cases).

In case you’re interested, a full list of what’s open and what’s not can be found here.

Before I leave you to go cry under my desk, let me mention how ironic it is that even though this entire debate is happening because of Obamacare, the President’s signature health plan still went into affect on October 1st, allowing millions of American’s to purchase insurance for the first time.

*Because whatever. Lost is still the best show around. 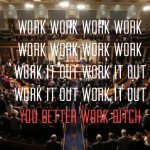 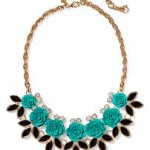