When they say ‘there’s an app for that,’ they weren’t kidding (and no, I don’t know who ‘they’ are either). There is literally an app for everything. The past couple of weeks I have gotten to play around and really get to know my Acer Tablet. I’ve found apps I was searching for… and apps I didn’t even know existed. But the best thing I found was that all the apps I downloaded were extremely helpful with things I do every single day. And I guarantee you too would find numerous apps that would help you keep your extremely busy life in order if you were to also get your hands on an Intel Tablet. 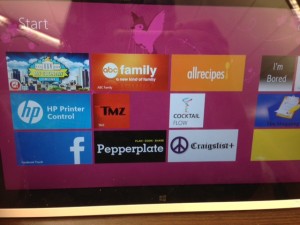 As a 20-something, you most likely do the following 10 things on a weekly (if not daily) basis. Here is how an Intel Tablet with Windows 8 can help you do a better job at… life:

I am always shopping for something whether it be food, clothes, alcohol, shoes, or other necessary supplies. To avoid spending too much money (which I often do anyway), I try to make shopping lists. This app I recently got called ‘The Shopping List‘ has totally enhanced this process by providing each list with a budget. For instance, I can make a shopping list for groceries and cap it at $100, so before I go to the store I can have an idea of how much I can buy and how much I’m going to spend. This is much better than just throwing a bunch of things down on paper and having a big surprise when I get to the cash register. And yes – I could put my budget on paper and figure how much I can buy myself, but let’s be serious – who wants to actually do math? Gross. I can also get a lot of fun shopping done on the tablet… I have apps for Amazon and eBay and I can also browse my favorite stores’ websites (coughnordstromcough) on Internet Explorer.

Always browsing Pinterest for new recipes, but never sure if the picture is always going to lead you to a recipe — and if it does, if it will be legit? Windows 8 has tons of apps filled with recipes. iCookbook has thousands of recipes that you can search for based on ingredient, dish, theme, cuisine, occasion, and brand. And they show awesome pictures that will make your mouth water for sure. Pepperplate lets you easily plan meals on the go. You can import and edit recipes from other sites and add your own recipes. You can create weekly menus and from there, make shopping lists. The popular site allrecipes has an app too, which is much better to browse through than their actual website because it’s full of pictures. Pictures of food. It doesn’t get much better than that. 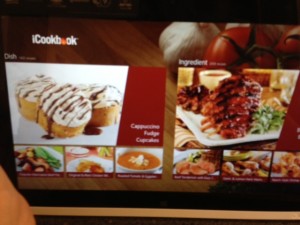 As a 20-something, you probably have no money for a personal trainer, barely enough money for a gym account (if you have enough money for one at all), and basically no time to go to the gym. Well – with an Intel Tablet, you can be the busiest person ever and still get fit. With the app, Gym Guide, you can check out different exercises for each part of your body (yes — every single part) and even watch videos on how to do each exercise. The same goes for the app, Gym Workouts, except they don’t have videos.

Catch up on the news

Right on your ‘start’ screen, there is a news app pre-loaded for you and it switches between pictures from the latest news stories. You can also get apps for your favorite news station, whether it be Fox, CNN, NBC, or ABC… even Aljazeera. Of course I got myself the TMZ app because to me, that’s the only news that matters.

Face to face communication is soooo 20 years ago (FML, so old… btw does anyone even say FML anymore?)… and communication via mouth is sooo 2005. We’ve since entered a world full of keyboards. A world full of texts. A world full of statuses. A world full of absolutely no privacy whatsoever, despite the privacy settings you may set for yourself. Nevermind the fact that people barely ever talk on the phone anymore, people don’t even text as much. We know what everyone is doing based on their Facebook updates, tweets, and posted pictures. With the many apps available on Intel Tablets and the fact you can just go on whatever site you want on Internet Explorer, you will be able to keep in touch with the world from wherever you are at any time. With the app, Social Jogger, I was able to sync my Facebook and Twitter together in an interface where I can follow all my social networks. There are also various Twitter apps where you can manage multiple Twitter accounts and see your tweets, newsfeed, and interactions in one place. And if you are slowly diving back into the word of face to face communication (not in person though, duh), you can get the Skype app to video chat with people. Sure iPads have FaceTime… but not everyone has apple devices. Everyone (who is everyone) has Skype though. Hello, world.

Sure we can entertain ourselves with the many apps and aspects of the tablet said above. But what about when we’re just super bored with no one left to stalk, no news left to read, and no recipes to plan? Well – even though this will most likely never happen because we’re always busy – the Intel Tablet is determined to not let you get bored ever. Seriously. They have this app called ‘I’m Bored‘ where it just gives you ideas for things to do and how much said thing costs. For instance, just now I clicked on the app and it told me to clean something up… then I clicked ‘ReRoll’ to get the next thing to do and it said go to the museum. Going to the museum is apparently $0-$25 according to the tablet, but cleaning something is free… so I ReRoll-ed again because I don’t feel like cleaning and was told to study something new. Basically, you will probably never actually do anything it tells you to but you can keep re-rolling to see what it will spit out next. 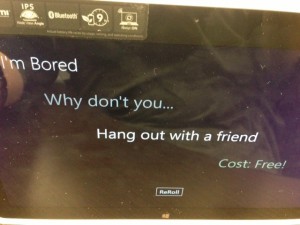 The last thing you probably want to do with a fun ‘toy’ is work, but doesn’t using said toy make work slightly fun? Especially when the toy lets you work from literally anywhere while having access to all the fun stuff to? The toy I’m talking about is the tablet… and the way it let’s you stay on top of work is through Microsoft Office, access to printers, Remote Desktop, and other apps that may be helpful to you. For me, I have to use Remote Desktop when not in the office. My Acer Tablet lets me easily connect to my work computer account remotely so I can stay on top of scheduling and emails when on-call or not in the office. This is something extremely valuable to me — and I’m sure the tablet would have it’s own way of providing something that would be of value to you too. As I said when comparing Intel Tablets to iPads, you can’t access Microsoft Office on iPads so if you need to draft something up in Word or Excel on a Windows tablet, you will be in luck. Microsoft is very helpful to me personally when drafting up blog posts (like this one!) — as is the app ‘To-do’s‘ where you can write to-do lists and feature them right on the start screen of your tablet so you won’t forget. Of course, you can also keep up with your emails on your tablet… but you can do that anywhere, so it’s not really a thing. And if you don’t have a job, get the Craigslist app so you can keep tabs on any jobs that do become available. It would suck to miss out on applying to your dream job because you weren’t at a computer for a day or two.

Like me, I’m sure you are so busy that you rarely have time to watch television. You probably resort to watching shows On Demand or online… but, like, you’re sometimes to busy to even sit down in front of a computer or a television to watch something On Demand at home. So what else can you do to stay somewhat up-to-date on your favorite shows? Watch on your tablet! On my Acer Tablet, I have HuluPlus and Netflix. You can also go to a network’s website and watch the show there like you would on your desktop computer or laptop… and you can get apps for your favorite networks. For instance, I got the ABC Family app so I can watch Pretty Little Liars from basically anywhere (it’s a weird obsession, but whatever).

For those of you bookworms out there, Windows 8 can connect with your Kindle/Amazon account and therefore basically turn into a Kindle. The tablet really does do everything!

Last but not least, I want to tell you about my faaaaaave app (duh) — ‘Cocktail Flow.‘ This app gives you recipes for, like, every alcoholic beverage out there. You can browse by type of alcohol or color and it gives you tons of drinks. I know what I’ll be doing this weekend…

How To Wear Hearts On Valentine’s Day Without Looking Cliché