As an administrative receptionist, I have a decent amount of time on my hands (especially between the hours of 4PM and 7PM, when the phone stops ringing, the emails cease flooding into my Inbox, and most corporate human beings retreat back to their homes at a decent hour). During that time, I do what anyone else in my position would do—surf the Internet for websites that are so revolutionary and inspiring that they eat up those last three hours without leaving a single crumb. Unfortunately, this happens very rarely. Unlike the final Math League Question that Cady Heron brilliantly recalls at the climax of the movie, the limit most certainly exists on Tumblr and StumbleUpon.

One thing I can almost always count on is my fellow receptionist friends’ ability to entertain me when those websites get monotonous. Earlier this week, one of them sent me a link I had never visited before: http://www.newyorkwritesitself.com/. Even if you’re not a New Yorker, check it out. The mini stories range from freaky subway creatures (and by “creatures” I’m referring to the people, not the rodents), to sidewalk encounters from hell (ex: impromptu religious sermons), to overheard conversations that can take the form of manic banter (99% of the time) or even inspiring words of wisdom (the remaining 1%, if you’re smart enough to listen for it.) With this website, New Yorkers are taking their collection of random experiences and documenting them for all the world to read and absorb. Personally, I think it’s brilliant. Anyone who has seen, visited, or lived in New York knows that it is a hodgepodge of personalities, ethnicities, colors, and beliefs. What better way to tell the everyday stories of New York than to have it pieced together by the people who comprise the urban jungle we all can’t get enough of?

But back to my point.

While I was browsing through the site, I came across a post that I haven’t been able to stop thinking about:

Waiting in line to see an indie film at Symphony Space, I overhear-

“I just need to go to Europe this summer. Get Lost. Find
something to do. Learn German. Study Gothic
architecture. Better than staying around this city.
Fucking around. Nothing changes. Everything changes.”

Some might criticize the voice behind these words or deem the author of this quote horribly ungrateful for living in a city of abundant opportunity only to seek an escape; some may not understand the message being transmitted. Maybe that’s the point of it. There are people out there who are completely content with their lives. They are satisfied by the mundane activities, the routine trips to buy milk and eggs, arriving at the same job with the same responsibilities; settling into a comfortable lifestyle. I’m happy for them; however, I’m not envious. I define “being content” as settling for circumstances. Being content means having no thirst for growth, for bigger goals, or even for bigger dreams. This is something that I just can’t seem to wrap my head around. Who isn’t hungry for more success, even after they’ve reached it? Who doesn’t want to keep evolving, keep inspiring, or keep being inspired?

And that is why this post speaks volumes; because it speaks to people like me (and maybe people like you), whose dreams have no limits. It reminds us that we are not alone in our constant search for greatness; that existing in-transit opens doors that one-year leases cannot. One place cannot determine your greatness, so we keep moving in order to test that greatness. We move across countries, religions, traditions, all in an effort to leave our mark on the world without appearing as if we’ve lost that thirst for success. We’re the ones who are hungry even after we’ve just been fed.

Let’s not get lost in my metaphorical phrasing. The message is clear: exploring uncharted territory leads to personal growth, which contributes to the realization of more goals that need to be met. Obviously this is all easier said than done. Leaving your comfort zone isn’t a concept embraced by everyone. At home, we have a schedule. We have a pharmacy on the corner, a reliable next-door neighbor, and a 45-minute commute into work. We program ourselves to live by these parameters, and we’re OK with it at first. We love the stability that it provides us with. So we put off our trips to Bali and European excursions and sit in the center of the four walls that house our existence. We sit there until our imaginations burst outside the windows and force us to imagine a life outside of them. Once this happens, our minds become consumed by it. Should I stay, should I go? What are the consequences of staying? Are they worse than leaving? Answering these questions would be impossible. As the old cliché/Adele song goes, “You never know if you never try,” but how do we know when we’re ready to try? How do we know what will happen if we don’t try? And the truth is, we’re never ready. We won’t ever know the end result. But when we are ready, none of these uncertainties will stop us from taking a step into the darkness. When we stop fearing the unknown, it doesn’t stand a chance against us.

So what does my poetic rant boil down to? It means that we should follow whichever paths our hearts guide us toward. If your non-fat venti latte comforts you every Tuesday morning, drink it. If every fiber of your being is dependent upon the season finale of Real Housewives of New Jersey, watch it. And if your imagination brings you to a reality that you’ve always dreamed of living, go there. Never let judgmental stares, whispered criticism, or your own fears stop you from taking a leap of faith into the next chapter of your life. At the end of the day, it’s up to you to create your own happiness. 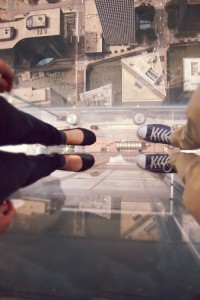 Now to bring it full circle, and to commemorate my discovery of this amazing website, I decided to contribute a story myself, entitled: A Declaration of Happiness:

For the dreamers, the runaways; the lovers who think outside of that damn box rather than remain caged by it; the secret storytellers who work 9-5’s to support their pen and paper addiction; the graduates who desire more than what is given to them, and who earn it because they won’t give up; the radical thinkers who can’t understand corporate life and the repetitious theme song that accompanies it; the anti-cubicles, the mistresses of art and poetry, landscapes and patterns; the ones who dared to leave despite their fear of returning changed—this is for us.