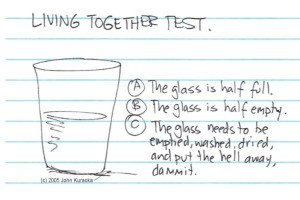 Whether you live with a boyfriend, a boy friend, a random dude from Craigslist (cue the New Girl theme song), your ex, or your brother, if you’re a female there are probably quite a few things that piss you off about it. Other than the fact that you can’t hang up pictures of flowers in your living room and put sequined pillows on the couch (seriously there are these cute sequined pillows at Target I need and my BF won’t let me buy them), there are a number of things that are just plain annoying about living with a dude.

I’ve been living with my boyfriend for a little over a year now, and although I love the fact he gets me bottles of water from the fridge when I’m glued to the couch and plugs in my phone every night before bed (he’s whipped — it’s fine), there are a couple things that make me miss living with girl friends. In addition to not being able to have a chevron comforter on the bed, here are some things that annoy me about living with a boyfriend.

1. He doesn’t give a shit how your outfit looks… or if your shoes match your shirt. Not only does he not care, he actually has no idea if your outfit is fashionable or if it matches at all. The only thing he’s good for is taking a picture of yourself in your outfit so you can then send it to your friends asking for advice. I mean, I guess there’s that. If you lived alone, you’d always have to take a selfie in the mirror… and the glare would always throw off the color your shirt really is. Ugh.

2. When he cuts his toe nails. Are you serious? That sound is so fucking disgusting? Can’t you do that somewhere else? (He heads in the bedroom) Okay, I can still hear it. UGHHHHHHHHHH.

4. Having snacks in the pantry. I don’t want to eat snacks. I mean, I do want to eat snacks… but I don’t want snacks available for me to eat when I want them. I grew up in a house of men. We had snacks on snacks on snacks on snacks. And because of that, I ate them, and was this annoying chubby teenager. If I grew up in a house of women, the snacks may have been not as plentiful and I might have been smaller. But since we can’t go back in time and scream at our younger selves to stop eating cheez-its and drinking soda, there’s nothing I can do now except eat healthy, work out, and AVOID SNACKING. But, like, how can I do that when I live with someone who for some reason needs to have peanut butter crackers and chips and spinach dip (okay, jk the spin dip is mine) stocked in the apartment at all times? It’s like why can’t we just live off of rice cakes and wine? Oh, because you are bigger than me and therefore get hungry. Riiiiiight. Well sorry I’m not sorry body for sneaking in some snacks sometimes. I CAN’T HELP IT. THEY’RE JUST THERE.

5. He’s not even looking at you when he responds “no” to “does this make me look fat.” So, like, does that outfit make you look fat? He said no… but is that just because you’re already late to your dinner reservations and he wants to leave already? Is it because he’s afraid to hurt your feelings? Is it because he’s your boyfriend and doesn’t think you look fat, when other boys might? Is it because… wait — he never even looked up at your outfit when you turned to the side. It’s all about the side view. You’re not going to look fat from the front, duh. Everyone knows that.

6. He will not – and I repeat – will not watch your kind of trash TV. For example: The Kardashians. He won’t even keep it on as background noise. He will change the channel. To ESPN. It’s not even like I’m a Kardashian fan. But sometimes you just want mindless TV on in the background while you stalk people on Facebook and scroll through your Twitter feed. The same goes for any show on Bravo and any drama on ABC Family (except Pretty Little Liars — if you try really hard, there’s an 85% chance you can get him into it). They don’t want to watch girl drama. You sitting on the couch talking about how much you dislike so-and-so is more than enough ‘girl drama’ for them. So with that you can make a choice — sit on your bed in your room watching TV alone… or find some TV-show-common-ground and watch with him on the couch.

7. Gaining weight. I’m sure not everyone gains weight when moving in with a dude, but umm I did. I went from eating veggie burgers sans the bun or scrambled eggs with toast or microwavable low cal meals every night to eating these elaborate dinners. I mean, how could I just eat the same old boring shit every night when the guy next to me is indulging in chicken nuggets? Like, I’m getting hungry just thinking about it (or maybe I’m getting hungry because its noon… idk). I started cooking occasionally because it’s easier to cook for two people instead of just for yourself… and meals I cook usually have more calories than a lean cuisine. I also just couldn’t turn down the prospect of mac and cheese or pizza when it was on the table (literally and figuratively). Now, I’m attempting to lose the weight — but that is not an easy task when living with a guy because, like, how can I just eat lettuce when watching him order out something that involves french fries and rainbows? UgHhHh.

8. The little hairs that pop up around the sink in the bathroom. Like, yeah maybe I shed all over the place, but at least small disgusting facial hairs don’t fall from my body in the shower and in the sink. My long, beautiful hairs gracefully break away from my head and land peacefully on the floor. It’s different — and definitely not as bad. Clean up your shit.

9. ‘What’s for dinner?’ Go fuck yourself. Don’t let a guy expect you to cook for him. Let him be excited that you are cooking for him. Or let him cook (or pick up a salad) for you. It’s a two way street my friends.

10. If you get in a fight, there’s no where to go. Well, like, maybe you can go to your friend’s apartment to complain about him while consuming all the Pinot in her fridge, but long term you’re kinda screwed. You can no longer get into one of those couple flights where you don’t talk for a few days. I mean, maybe you can, but you both live in the same place so you’re inevitably going to see each other. You can’t just move out of the apartment because 1. where will you go?, 2. you kind of signed a lease, 3. you don’t have anyone to consider moving in with now, 4. you don’t even have any money to put down a deposit for a new apartment anyway, and 5. you’re just in a fight, so you don’t want to pull anything drastic and not live together anymore because once you jump ship, you jump fucking ship, and you may or may not regret that later. I mean, if you have the money and can afford to pay the entire apartment’s rent, you could just kick your boy, his snacks, and his mail clutter to the curb… but like good luck kicking him out. He’s on the lease too. And he has no where to go either. But no worries. Fights usually end. IMAGINE BEING MARRIED! #NoThanks 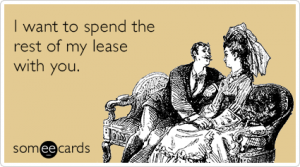 SoOoOOoOoOOo now that I’ve totally turned you off to moving in with your boyfriend, sorry I’m not sorry. The world would be a much better place with more bachelorette pads.

Okay, just kidding, living with a boy really isn’t THAT bad. In fact, despite my rage-filled list, there are plenty of good things about moving in with a dude. It’s just not going to be sunshine and rainbows 24/7 365. I mean, that’s life. It has it’s ups and it has it’s downs. Watching someone clip their toe nails is definitely a down. But going home to someone you love (and can also have sex with) every day, that’s an up. And through it all, if you realize you don’t want to continue living together in the future or get married, you won’t. But people fight. People get hungry. And people are messy. Learn to live and love, my friends. Learn to live and love.

And with that, if I get home tonight to my boyfriend sitting on the couch with his Timbs sitting on the floor in front of him while he clips his toenails watching some boring historical movie on a premium channel, I am going to freak the fuck out… which will probably result in a fight… in which I will have no where to go after… because that is my home too. Oh well! I’ll just have a glass of wine!

Why It’s Great to Live at Home (After College) 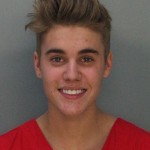 Justin Bieber Got Arrested… Here Is His Mug Shot