So, as most of us know, the networks have announced their 2011 fall lineups – shows have been canceled… shows have been renewed… and new shows have emerged. Some of them look pretty good, others not so good, and the cancellations – well, let’s just say that a show that I have enjoyed has NEVER been canceled before.

That’s right – one of my favorite shows this year was canceled just as season 1 finished up. Hellcats. The college cheerleading drama that at first kind of sucked, but then got super dramatic and awesome as the season progressed. Maybe I am a little biased in my opinion, since I was a college cheerleader and I do admit to loving shows that you don’t need much intelligence for – and Ashley Tisdale. I think that Hellcats was canceled far too soon, though. It started off sloppy, so it lost a lot of viewers, but what happened in the rest of the season was crazy drama – crazy. And now, we will forever wonder wtf ever happened to these people.

Here are some of the best (and worst) new shows airing this fall for us twenty somethings (guys AND girls):)

Zooey Deschanel is going from the big screen to the small screen in Fox’s new comedy, “New Girl.” After watching the trailer, I’m super excited about this one. I love Zooey Deschanel – she’s fabulous and is the girl that everyone loves. I loved her in 500 Days of Summer (even though that movie left me depressed for weeks) and I know I’ll love her on TV. This show starts with a break up (just like ABC’s new comedy “Happy Endings” did this spring), leaving Zooey with no where to live after she catches her boyfriend who she lives with cheating on her. She moves in with 3 guys who seem like your typical young bros… and then it goes from there! I think it has great potential. And it’s on after Glee – so most of the viewers will be left watching this show anyway because Americans are way too lazy to change the channel after their fave show (great time slot choice!!!). It’s going up against Biggest Loser & Dancing with the Stars (results), but people who enjoy comedy will flock to this – as it’s the only comedy in its time slot – Tuesday nights at 9. (Omg just realized Pretty Little Liars is on then… but I think the season will be over by then).

When I heard about Pan Am, I was sooooooo excited. Soooo excited. I pictured Leo Dicaprio circa 2002 in Catch Me If You Can – one of my favorite movies. This is not Catch Me If You Can though, and is a Mad Men like show about the lives of stewardesses in 1963. Although it will be on network television, I still think this will be a hit. Mad Men did it big with ad execs, but people are still fascinated by stewardesses in the 1960’s – I think. And men still fantasize about it – I think. This show will also star Christina Ricci (AHH Casper) and will be on every Sunday at 10pm. Of course this won’t compete with any network TV shows at that time (except football… maybe?? if football happens??)… BUT it WILL be competing with HBO’s Sunday night lineup – which is pretty much MY night. And the people who enjoy HBO shows will most likely be the same people who will like Pan Am… In addition this revelation – how well will Pan Am do on network TV? Looks like another should-be-on-hbo-or-amc show…

Ahh, Jonah Hill – funny guy. And his new show – funny stuff. This show actually looks prettttttttttty good. Its about a kid who is well beyond his years and is entering elementary school. So like a normal Stewie??? Kinda. Watch the vid to see if you want to check this show out on Sundays at 830pm.

Up All Night (NBC)

NBC’s new comedy, Up All Night, will be airing Thursday nights at 8pm. I will most definitely be watching. It looks hilarious – and has Maya Rudolph in it… And after the success Bridesmaids has been having, I’m sure her new show will have just as much. It’s about a couple that just had a baby and life after that with work, etc involved. Funny people, interesting plot, should be a good show.

Wow – this show has a LOT of potential. Produced by JJ Abrams & Jonathon Nolan, this is sure to be a hit. It’s about in a crime thriller about a presumed dead former-CIA agent and a rich software genius who team up to prevent crimes from happening… It’s not a cop show so its different from the rest. This would be for the drama, crime scene, violence loving twenty something and you can catch it every Thursday at 9pm on CBS.

Once Upon a Time (ABC)

Okay, now I am like suuuuuuuuper confused. If you’re a True Blood fan, you know the next season is going to be about Sookie Stackhouse as a fairy… and with the vampire craze dying down, are FAIRIES the next big thing??? I guess we will find out when we enter this world where fairy tales and modern day reality combine… Looks kind of crazy. I probably would have no idea what’s going on, but that makes you want to watch something each week right??? I never watched Lost, but this is from the creators of Lost – and seems like ABC’s new mind game show… Prob one you have to start watching from the beginning and can’t miss an episode. I read that in financial hardships, people enjoy watching fairy tale/super natural shows to escape reality – so in this endless recession, Once Upon a Time could be a big hit. It will be on on Sundays at 8pm.

This is not about sports. Its about single adults trying to find someone again. Looks like it should have been a movie, but who knows, maybe it will be a hit. I think I might like this one! It will be on every Wednesday at 830pm. 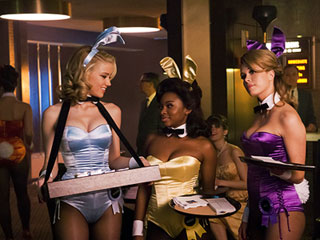 Okay, here is one I think I’m super excited about… If you can’t tell from the title, this show is about the start of Hugh Hefner’s empire in the 1960’s set in Chicago. Now, I would think that HBO would have already claimed this show – I mean, doesn’t it sound perfect for cable tv? Nudity, sex, drugs, alcohol, profanity… that’s what I think of when I hear “The Playboy Club.” But when you match that up with network TV, the nudity, sex, drugs, alcohol, and profanity is pretty much all gone… and we’re left with… well, I guess we’ll find out what we’re left with this fall every Monday at 10pm. Entertainment Weekly quoted one of the shows’ stars – Amber Heard – “I think because this is character-based — it’s a group of friends who become family within this interesting, rich setting — I think the plot and stars can’t help but take center stage. The racy material, you’ll find, is not all that racy.” Well DUH… this show is going to be on network television… However, it still has a good chance of being a favorite I think!

This looks like it COULD be funny… without a laugh track of course… Probably because I just graduated (just like the rest of you!!!) and now have no money (also just like the rest of you!!!). It’s literally about two broke girls – one came from no money and the other came from tons… This will be on Mondays at 830pm (Pretty Little Liars is being switched to Tuesdays at 9 last I heard – so it shouldn’t conflict). Watch the video here:

Oh boy, another ABC comedy taking the 830pm time slot on Wednesdays right before Modern Family. It’s a high school comedy, about a girl from Manhattan who got pregnant, so her single dad moved them to suburbia – a land quite unfamiliar to them. So basically, its just a satirical look at life in the suburbs. Once again, funny stuff. I think this could either be a hit – or a flop. It will def go only one way. It’s going up against The X Factor and 2 other new shows (and Survivor) so I guess we’ll find out what people love when the ratings come out this fall. Here’s a vid to get yourself acquainted with the new show:

I still can’t tell what exactly this show is about from the video, and I’m sick of reading articles right now… but it takes place in the Hamptons and is about a girl trying to get REVENGE (could you tell from the title?!). Its about rich people, fights, money, the FBI, and love (maybe?). Maybe I’ll watch this, maybe not. This will be on Wednesdays at 10.

For a few minutes, I was thinking this show was “H-8-R” and was wondering WTF it was about. And then it hit me… Hater… H8R… Really??? I typed like that in middle school when Avril’s “Sk8r Boi” was topping the charts. Apparently, this is a reality show hosted by Mario Lopez. Each week he is going to match celebs up with their haters (or should I say h8r’s) and the celeb will try to show their haters that they are cool and that they should like them. The pilot featured Kim Kardashian and Snooki. Oh boy, I actually have no words for how this show might turn out…  This show will either be super funny OR we will be telling it see you “L8R” next spring 🙂

I Hate My Teenage Daughter (FOX)

Oh no, Fox, you are setting yourself up for disaster! This show seems like it would be a hit on Disney or something. It’s about 2 mothers who are afraid of their daughters because they are growing up to be the mean girls that they didn’t like in high school. It’s on Wednesdays at 9:30 and will be going against some good shows including ABC’s Happy Endings – which I happen to love. Just watch the trailer and you’ll see what I mean. A laugh track can kill comedy sometimes…

Well, the plot of this show isn’t that hard to figure out… ABC is bringing back the hit show (and movie franchise), Charlie’s Angels. Not really sure how it will do. The girls are hot, but not THAT hot. Once again, I will remind you that network TV doesn’t really let sex sell… and in order for Charlie’s Angels to do well in the modern world, I think they really need sex to sell it. BUT we will see how the show turns out every Thursday at 8pm.

The 10 Real Reasons Why The World Might End Tomorrow