Here’s the biggest piece of breaking news this year:  Kim “Don’t Harass Me Because I Leave My Kid with a Nanny To Go Party with Lindsay Lohan” Kardashian is an out of touch bitch.

While most celebrities were Instagram-ing adorable, wholesome pictures of their loved ones, and while everyone else was filtering images of them getting black out on cheap champagne with friends they probably only half like, the mother of North West The Person shared this pompous image with all of her Instagram followers, with the caption, “It was an amazing year!!!” 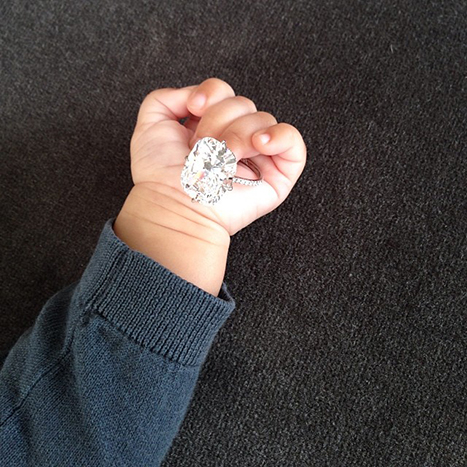 It would appear that Kim has found a new way to utilize her latest accessory, her infant daughter:  as a jewelry stand!  Who would have thought the daughter of Kim and Kanye’s rotund figure could hold on to multi-million dollar diamonds so well?  SO INNOVATIVE, KIM!

But really, let me break this down for those who still haven’t realized the degree of douche bag this post was:

Yes, Kim, we get it, you had a child out of wedlock with a rapper and gave it a stupid name.  You’re very proud of yourself, but nobody else really gave a fuck, mainly because you’re definitely not the first girl in the world to have a child out of wed lock with a rapper and give it a stupid name.  You also gained the worst cankles in the history of time during the process of gestating your little “miracle” and you annoyed literally EVERYONE in the world by thinking people cared about you getting fat (I mean, secretly, we all loved the fact that you looked like an Orca, but whatever).

Also, congrats on your huge fucking ring.  Is it tainted at all by the knowledge that  your marriage to Kanye will be your THIRD?!  The thrill of a fairy tale is kind of lost when you realize you’re actually a huge failure romantically, isn’t it, Kimmy?

In true Kardashian fashion, Kim has decided to show off her tainted material accomplishments instead of actually reflecting on the year past and providing valuable insight for the upcoming year…or making her family the primary focus.  I’m sorry, but the Instagram queen knew what she was doing when she made her ring the focus of the picture and not the un-manicured hand of her daughter.

Kim is literally worse than the people who post the “I SAID YES” ring shots on Facebook after getting engaged on Christmas Eve.

After this horrendous Insta, she then had to go and post a workout selfie with her friend who is named Blac. Blac Chyna. What kind of name is that? I mean honestly, who is named that? 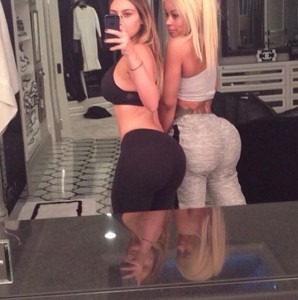 Sooooo congrats. Your ass is huge. But in the words of my fat friend from North Shore High School… WATCH WHERE YOU’RE GOING, FAT ASS. That’s what she would say to you…

Between all the people with potentials to be the biggest assholes of 2014, Kim K is winning the race by a landslide so far, and let me tell you, since Taylor Swift still exists, the competition for the highly un-coveted title is FIERCE. 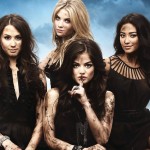