There are some people who come into our lives and get attached to us like glue. From the moment you meet them, you know that you’re meant to be together and will change each other’s lives.Then, there are others who are just sort of… there. You might have mutual friends, be involved in the same activities, or have made a couple random memories. You never considered them your “best friend”, but one day you look up and realize how empty you would be without them.

As the years went on, they became an integral part of who you are and your values as a person. They weren’t the ones you called up first when you were upset; they were the ones you went to when you no longer felt like talking. A movie, a couple episodes of your favorite TV show, some light conversation, and you forgot all of your troubles. When you look through old photos, they’re the ones who seem to pop up more and more frequently as the years roll on.

The older I get, the more I appreciate these people who are still around. Let’s face it, even with friendships, sometimes things just don’t work out. You think someone is going to be awesome for you, but quickly realize there are too many areas where you clash. In a digital age and such a disposable culture, sticking around becomes less and less frequent because it’s become so much easier to just leave.

The people are still around are the ones that you didn’t quite understand at first, but eventually grew to love. They’re the ones who accepted you for you, who you’d feel comfortable sitting in complete silence with, who are quirky and interesting and unique. They’re the ones you might lose touch with for a time, but pick up with the moment you’re back together.

The people who stick around are the ones who are worth it, and the ones who don’t get enough credit. Sometimes you just need friends like this; people who are fine with giving you your space, people who can totally call you out on your bullshit when you decide not to come out, but aren’t offended and still invite you the next weekend. They’re the ones that you’re not nervous embarrassing yourself in front of, since they’ve seen all sides of you and would (probably should) have left by now.

So this Christmas, take a moment to think about who these people are, the undervalued, usually under appreciated people who would do anything for you at a drop of a hat. These are the people who will matter the most. Let them know how much you love them, because chances are they feel the same way about you.

I'm a 23 year old graduate student studying Digital Media and Design at the University of Connecticut. I have an unparalleled love for coffee and currently spend my days balancing a social life and design work. Love to seek out mini adventures and make every day count. Follow me on Instagram! @alexxamberr

12 Signs You Have a Drunk Eating Problem 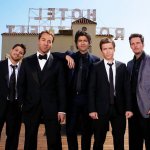 10 Reasons We Can’t Wait For The ‘Entourage’ Movie