Sub-Header: In which, I unwittingly spend oodles of money to have, ultimately, nothing change about my hair…

Pinterest is a dividing entity; either you think it’s a huge time suck for the lazy and unoriginal or you wake up with the app open on your iPhone and more pins of pumpkin recipes than you’d like to admit. So I hear. Anyways…

Among the given “My Style” and “Home Décor” boards I have a “Hair” board, which should really be titled “Ombré Hair” as it consists exclusively of Rachel Bilson look-alikes. After months of clamoring over the perfect brunette to beach-blonde faded look I decided I would go for it before the summer was over.

I’ve always been fairly fearless with my hair. From freshman to junior year of college, I’d been every shade of red with lengths varying from nearly waist length to just enough to tuck behind the ears. Senior year I settled into my natural darker shade of brown and have kept my hair shoulder length or longer ever since. Because my normal awesome stylist is just out of reach of the MBTA, I’ve bounced around a handful of salons off the Green line for regular trims and blow-outs when borrowing my sister’s car isn’t an option. This summer after months of training for a road race my hair was particularly roughed up from sun and sweat I decided to go for a fresh trim.

After calling around my usual local spots with no luck, I did some heavy Yelp researching and calling a few places to get an appointment stat. I settled on a little salon just one T stop away from work with rave reviews for one stylist in particular, who I’ll call Miranda.

My first experience with Miranda was great. The salon was in an adorable brownstone-like building a step away from the T, they had piles of current magazines, a Keurig, and even offered Sangria; heavenly considering I had just come from a hellish day at work.  She had a cool retro look with dark hair, pale skin, and red lips, gave me a cute fresh cut and blow dry in the $45 range, and wasn’t too awkward to talk to – sold. I let my obsession with the ombré look slip out in conversation and, as fate would have it, she had done an ombré style on her coworker, and was attune to the difference between a cool, natural looking ombré and the offensive black on top/orange on bottom look.  After months of clamoring over ombré, I decided to go for it.

So, two weeks later, I sat again in Miranda’s chair priming myself for the terrifying experience that is bleaching brunette hair. Stacks of People Magazine and piles of tin foil later, my hair was noticeably blonde underneath and a bit lighter all over, but not exactly ombré.

“Come back in” she said, “I want to make sure it’s perfect”.

Here is where it all goes wrong.

Miranda agreed to take me in between appointments for a quick fix a few days later.  I watched her apply liberal strokes of bleach and thought OK – cool. It’s definitely going to be noticeably lighter this time. I’m really going to be partially blonde. Exciting.

After what seemed like an eternity of waiting for the color to “lift”, as they say, Miranda had the shampoo girl tone and rinse my hair. I should have started to worry when the shampoo girl called Miranda over not once or twice, but three times, to discuss the color of my hair.

“Just a few more minutes sweetie!” she reassured me.

Twenty minutes later, Pepper Ann stared back at me in the salon bathroom mirror.

I tied up my wet, coppery red hair in the tightest ballerina bun I could fashion and walked out of the bathroom. Miranda’s dismay was clear as I scurried to the front of the salon as quick as I could manage, trying not to be too obviously horrified but too distraught to do more than barely pause to hear her murmur something about “come back again…brassy…it’s on the house.”

A painstaking 48 hours of headbands, ponytails and shame later I sat in my normal salon at my good friend’s chair, having been given a pity ride from my older sister, mortified as she tried (and failed) to not laugh at the disaster on top of my head. This is the day after I had to take a picture with my coworkers and my boss for a national campaign at work. No one said anything about my hair. It was awkward.

Thankfully, she took mercy on me saved my strands and didn’t have to give me a Sinead O’Connor, like I feared. She applied a nice dark chocolate all over color and advised me to buy a car and be less trusting of strangers.

I’ve since gone back and had my hair darkened again and I can finally say I feel like myself again. I still haven’t come to grips with the fact that I’ll never look quite as effortlessly beach-y cool yet chic as Lily Aldridge. 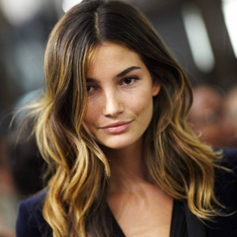 There is a difference, though, between “playing it safe” with beauty and simply sticking to what you know – my hair is naturally dark and compliments my light eyes and skin. I’ll stick to experimenting with sock buns and waterfall braids from here out.

Gift Ideas For Girls (AKA My Holiday Wish List)