Yesterday we brought you The Perks of Being Single, so today we’re bringing you a couple perks of being in a relationship. Which perks do you think are better?

Feel the need to talk? Don’t care if anyone listens? You’re all set. You have a person you can blab nonsense to when you’re venting or just because you like the sound of your own voice. When something happens that you need to tell someone NOW, you have someone to text immediately other than your mom. It’s like a best friend 2.0. who you can annoy without having worry that they will ditch yo ass.

Your S/O sees you naked and makeupless and still likes you for some reason, so who do you have to impress anymore? Yourself in pictures… but that’s, like, about it. There’s no more going out to get with someone… you’re just going out to have a good time with friends. You don’t have to worry about dressing to impress, or looking fit in order to get some. You’re going to get some anyway, as long as you don’t let yourself go (you still gotta work out). So it’s like there’s no worries…. Hakuna EFFING matata.

ZIP ME, YOU BETCH.

If you need someone to zip up your dress while getting ready, you’re good to go. You don’t need to worry about a roommate not being home… or asking someone to help you while trying to hide your showing boobs/ass. You always have someone there and they see you naked all the time… which brings me to another perk… NOT having to be zipped up all the time. That shit is tight.

You have someone you can be so totally effing bizarre with… AKA you can TOTALLY and COMPLETELY be yourself when with them… and that is awesome. You are kind of a freak and it’s fine.

But seriously, let’s just talk about it and barely ever have it… because that’s what happens when you’re in a long term relationship. After a while, you get used to each other and show immense laziness and it’s like whenever they want to have sex, you don’t. And whenever you want to have sex, they’re not home. But don’t worry. Even though you think you’re never having sex when you’re having it twice a week or more, you are. At least more than a single person (one would hope).

You won’t get to finish your meals because they’ll finish it for you! It’s like the best diet ever.

Buy me this, buy me that.

Maybe this is because I’m a girl (okay, it IS because I’m a girl), but every now and then a free dinner will make it’s way on to my plate and I won’t complain. This isn’t all the time because after you get through the first couple dates, you 1. stop constantly dating and 2. start paying for yourself (sometimes)… BUT it’s still kinda nice. For instance, you don’t have to put your boobs out there in order to get a free drink at the bar. You can just be like BOYFRIEND, BUY ME THIS, and if he wants to get some after hours, he will. Unfortunately this doesn’t work for clothes and accessories… but only if he knew a random new bag would get him even MORE sex, maybe he would be into it.

All By Myself… No More!

When all else fails, hello boyfriend. You always have someone to see that movie with. And attend that concert with. And go to that restaurant with. And STAY IN with. Even if they don’t want to, if no one else will go with you, all you have to do is show a sad face and they’ll go somewhere with you for pity points. This only works if you do the same for them. So, like, maybe you sometimes have to do things you don’t want to… but it all comes full circle when you’re getting to do what you want! And, umm, hopefully you like to do a lot of the same things… In addition to always having someone to hang out with (as I said before, best friend 2.0.), you always have someone to text and call. If you want to appear as Hollywood while walking down the street to make you less appealing to sketchy looking men, you can. Lastly, you always have someone to fall asleep with. And although you may get pissed the fuck off when they try to steal all the sheets mid-sleep, and you may get minor insomnia from not being able to spread your legs out to the cold parts of the bed because their body is covering it, having someone to fall asleep with and wake up with is kinda nice. 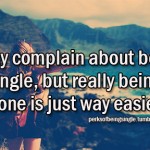 The Perks of Being Single 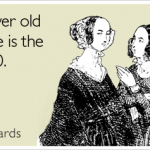 Things That Will Make You Feel YOUNG