“I am never drinking again:”  A twenty somethings’ famous “last” words after a night of drinking, debauchery, and (maybe) dancing. However, those are never really our “last” words because despite the horrendous hangovers that take over our bodies every weekend morning (and weekday morning back in college), we always find ourselves doing it once again the next night – possibly even harder than before. 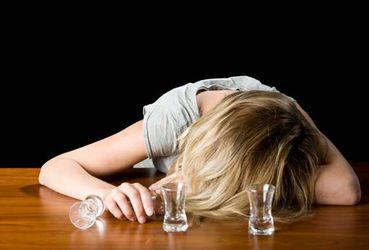 Headaches, stomach aches, late night puke parties, early morning vom sessions, binge eating when the hangover passes leading to weight gain .. Why do we do this to ourselves? Because it’s fun – duh. And although for those few hours it may absolutely suck, you get over it quick when you realize that you had the “best night ever.”

Let’s say you went out last night, were home and in bed by 1am, and were able to wake up AND function in the 9am Zumba class. Chances are, you probably had a shitty/boring night. You probably should have just stayed in watching whatever shitty/awesome movie was on E!. Casual drinking is for umm, your parents (if they even drink anymore). If you’re going to waste calories on alcohol, you might as well drink enough so it is either a) worth it or b) exits your system that night or the next morning.

Back in college, the above scenario was more of a victory than a “shitty night.” You drank so much back then that you only got hangovers when you weren’t drinking because your body was rejecting the unfamiliar – soberness. Unfortunately, post-college life (for most people except alcoholics and people in advertising) means you are not going to be able to go out as much because of two things: 1. Work and 2. Your impending old-age-feeling due to work. Instead of going out on a Wednesday night, you might still be at work… and in addition to that, you might have to wake up at 5am to go in the next day. This whole entry level work routine has us so completely beat that come Friday, some people choose to stay in. Yes – not go out. This means as a post grad, you’re now drinking 2… or 1… or NO nights a week. This means hangovers are going to happen no matter what… and they’re going to be an absolute bitch, no matter what.

There are many different hangovers you can experience. You can wake up feeling fine in the morning, and then start receiving multiple texts asking “are you okay?” and “what happened to you last night?” After this, you will probably find out you were throwing up all last night and basically made a complete fool of yourself. Another type of hangover beings with you waking up in the morning feeling fine, but then around 2/3pm you get sick. And my body’s personal favorite hangover occurs around 530 in the morning when you wake up next to a half eaten piece of pizza and begin throwing up on and off until 9 or 10am. 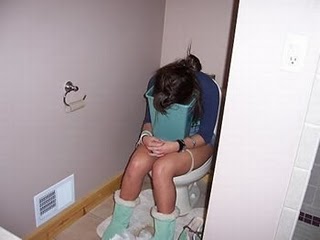 As college grads, we all know: the more hungover you are OR the less you remember, the better of a night you had. No one wants to be the person at brunch the next morning who can’t one up the person talking about how BAD their hangover is. Your hangover is obviously way worse (That is code for: “My night was obviously way better“). Maybe this is our way of making ourselves feel like we’re not growing up. Or maybe this is our way of trying to forget about the horrible week at work we had. Whatever the reason, we probably shouldn’t be getting that drunk anymore. There has to be a time when we grow up, right?

Unfortunately, in the next 10 years, a lot of us will be parents… meaning the end of going out on a regular basis will come to an end. But that doesn’t mean the fun has to end now… Soon enough you will most likely have a kid who drinks more than you. Yeah, not okay. So before that time comes (and who knows when that will be), live large and have fun (just try not to black out on a weekly basis). Will Smith and his buddy, Jazzy Jeff, were wrong when they said “parents just don’t understand.” They understand. They used to go hard – Yes, that’s right. Almost as hard as you! But now, they are jealous that you can have 5 shots and only be buzzed… and they can have three glasses of wine and pass out in the next 20 minutes. Enjoy it while it lasts, because every second of every day, we are only getting older. Rage, 20-somethings. Rage.