For 20-something years our lives were structured around this little thing called school. We spent our weekdays in class surrounded by peers, our weeknights doing homework and going to practice (and drinking when we got older), and our weekends socializing. During Summer, holidays, and breaks, we had time off, but we always knew that in just a few days, weeks, or month we would back in the classroom. We never really had to worry about finding permanent work. Our work was school and it seemed to find us every year.

Sure, a lot of us had jobs during high school and college, but let’s not get ahead of ourselves and call our after school jobs and college internships serious work. Yeah, they may have been strenuous at the time, but they like weren’t. At least compared to what we’re doing now. And these ‘jobs’ weren’t even hard to find… We may have spent a few weeks going into every store at the mall asking if they were hiring at one point, but eventually we got that minimum wage job we were looking for.

Now that we’ve entered the real world, we’ve been hit with an extremely harsh reality check. The real world is not the mall. It’s not working for free. It’s not working somewhere for a few minutes until your extracurricular activities pick up or until you move back to school. It’s, like, serious. We have to commit to this job (there’s no end date). We have to be good at this job. We have to do real live work at this job – sometimes during our beloved gym time and into the wee hours of the night. But before we actually get this scary adult job, we have to find it… and let me tell you – finding a ‘real person’ job is not an easy task. Ever. 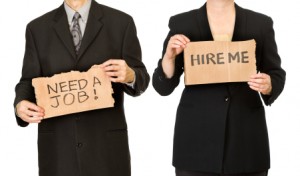 During Senior Year of College

Real world job searching began during our senior year of college. During this time we went wild because we knew in just a matter of minutes our childhood would be over and we would be forced into the real world. We went out every night that we weren’t sick. We put off papers until 10 minutes before they were due (or at least I did – good times, computer lab). We didn’t study for tests because we had better things to do. We didn’t give a f*ck about anything… except what was going to happen after graduation. And we didn’t want that to be nothing.

So, if we didn’t already have plans to go to grad school, we applied to jobs. We applied to jobs EVERYWHERE. Some of us got calls for interviews… and some of us got jobs… but for those of us who studied fields in which they don’t hire people months – or weeks – before the start date, we got no response. And what a blow to our self esteem that was. In the meantime, we attended ‘job fairs’ in our brand new suits holding our padfolios while awkwardly chatting with people who were most likely NOT going to hire us. However, we thought we were smarter, better, and more experienced than those we networked with and those that interviewed us (I mean, we went to a great school… and had great internships! Sigh). We were in this bubble in which we saw ourselves as invincible. But that ended quickly when we graduated.

For those of us with no job lined up after graduation, we really had nothing to look forward to, except nothing, which would get old fast. We weren’t worried though because we knew we would find something. It also hadn’t hit us yet that come August, we wouldn’t be packing our bags to head back to school. We wouldn’t be attending classes. We wouldn’t be surrounded by peers. We figured everything would work itself out because it always did in the past. We applied and interviewed for jobs we found interesting thinking positive thoughts because our last interview was 2 hours long and we were sure they wanted to hire us. But then we got that inevitable rejection email and don’t understand how they didn’t hire us. So we do it again, and again, and again. Some of us scored jobs. And some of us didn’t. But it was okay because we had enough graduation money to live off. And we enjoyed the immense amount of free time we had to spend at the beach.

For those of us still unemployed when ‘back to school’ time hit, we slowly started to turn bitter. We didn’t have school anymore as an excuse to ask our parents for money, and we were running low. We became bored and couldn’t continue doing nothing. We just didn’t have time to wait for a job offer anymore. We needed a job. But so did everyone else. People more experienced than us. People who know people we don’t. People who are better at interviewing and people who have better resumes than us (yes, they exist). We started to think, ‘will we ever find a job?’ Thoughts of going back to school crossed our minds, but we didn’t want to pay for it. Thoughts of working a retail or restaurant job crossed our minds, but we didn’t want to waste time interviewing for those and then later working when we could spend that time interviewing and applying for real jobs. Thoughts of interning again crossed our minds as well, but that would be embarrassing… right? But some of us eventually took action and accepted our defeat by becoming post-grad interns or part-time workers. We still thought this whole unemployed thing would be temporary, but with the lack of support on Indeed.com and Craigslist, we became skeptical. We started branching out and applying jobs that we weren’t even really interested in, but jobs that would get us by. We started changing up our resumes. We started networking with whoever walked in our direction. We were desperate and losing hope in our ability to become successful (even though we were like 22).

While You Have A Job

Eventually, all of us recent grads got jobs. And soon enough, we will get sick of our jobs (if we haven’t yet). Our previous experience involved working internships for a few months and then leaving, so staying at a company over a year seems insane. So we start to look at job openings elsewhere… because, why not? We’re twentysomethings and we have job ADD.

But, as post-grads, there aren’t many openings out there for us. We don’t have 10 years of experience. We don’t posses all the requirements. But we apply anyway because, like I said, why not? And then if we actually get an interview, we have to awkwardly make up a story about a doctor’s appointment in the middle of the day… or call in sick pretending we have the flu (but we’ll magically be better the next day of course). If it’s a phone interview we can still go to work, but we have to stealthily sneak out somewhere where no one will find us, whether that be in our car, outside (which can be awkward when cars drive by and the wind blows), or in the hall (which can also be awkward when someone you know walks by – nevermind the fact that phone interviews are awkward enough in the first place). Basically, job searching while working is a challenge, but at least you have something to fall back on (aka your current job) unlike your time spent unemployed after college graduation.

Post-grad job searching sucks. They never taught us how to handle it in school. They never told us where to look or what to search for. They taught us how to make a resume and gave examples of what may happen in an interview, but they didn’t teach us how to deal with rejection. Or warn us that getting a job is not an easy task… that we would have to do for the rest of our lives (with breaks in between of course). And while we burn job searching as post-grads, we will most likely burn it forever – not just while we’re in our twenties.

To Go Or Not To Go… To Grad School: That Is The Question