When I was younger, I had a Nextel. You know, the cell phone with the ‘walky talky’/’beep beep’ thing. I knew a few other people with Nextels and occasionally I would ‘beep beep’ with them… but it was always a problem because they could ‘beep beep’ me whenever, no matter where I was. And when they did so, everyone would hear my conversation. And it was awkward.

Eventually, Nextels and their walky talky counterpart went out with style… as they should have. But something far too similar remained popular: Speakerphone.

Of course speakerphone had to stick around for a few reasons…

One being, when you’re driving. In some states, talking on the phone while driving is illegal… but talking on speakerphone isn’t (or is it?). When you use SP, you don’t have to use your hands so they can stay put on the steering wheel while you get your gossip on. In other states, talking on the phone is legal while texting isn’t (this makes no sense, but it’s fine). However, its annoying to hold a phone sometimes when you’re driving even when it is legal. Especially if you’re on the phone with someone who talks your ear off not letting you get a word in. In that case, you can put the phone on SP and place it on the seat next to you because you don’t really care to listen to what they’re saying anyway. Perfect.

Another being, when you’re doing your hair or makeup. Sometimes you just have to talk on the phone even if it’s not convenient for you. Such times include when both of your hands are tied up. This often happens when you’re doing your hair or makeup… or your nails… or rummaging through your closet trying to pick out an outfit. All of these things are core steps in the getting ready process… and when you’re getting ready for something, you most likely have people to talk to about wherever it is you’re going and whatever it is you’re doing. This is where SP comes in handy.

As for other reasons… there are no other reasons. And if you’re thinking ‘when you’re in the bathroom,’ you’re disgusting and need to re-evaluate your life habits.

Other than the 2 reasons listed above, there are no other good reasons to use speakerphone. Sure, in a perfect world you could announce as soon as you answer the phone on speaker: ‘Hi. You’re on speakerphone. I’m with ___. Watch what you say!‘ and everything would be okay. But no one is going to do that. It’s an awkward thing to say. The person you’re with will automatically think ‘Why does he/she need to say that? Does he/she talk about me with this person behind my back?‘ Let’s not make the people around you paranoid. Seriously.

And if you don’t let the person on the other end of the phone know they’re on speaker, they could say something mean. They could say something personal about themselves. They could spill one of your secrets. And you can’t be mad or expect them to accept your apology because, umm, you put them on speaker phone. No one wants to say things without knowing who can hear them on the other end. What if you’re in public walking around the grocery store? What if you’re walking around your school’s campus? What if you’re at work? You never know what someone’s going to say and who’s going to be around to hear it… so WHY risk it?

In addition to this, no one can hear you when you’re on speakerphone. And it is SO annoying. Don’t you love when someone puts you on speaker phone, you can barely hear them and can mostly hear background noise, and you ask ‘am I on speaker phone?‘ …and they say no. Like are you kidding? I am obviously on speaker phone. I am not an idiot. If you have to lie about it, you probably shouldn’t be doing it. Even if you say no, the person you’re on the phone with is now going to be extremely paranoid and unable to talk about anything else except whether or not they are on speaker phone… and the fact that they can’t hear you.

So if you’re going to use speakerphone, you better have a good reason (especially if you’re in public). Because it pisses people off. For real. 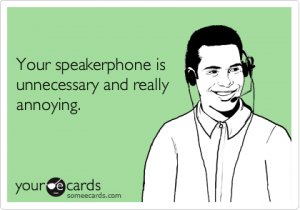 Four Similarities Between Job Hunting And Looking For Love