In college, I always wondered what people who didn’t drink did on the weekend. Did they stay in their dorm room and watch movies every night? Did they play instruments in the music school? Did they find other people like them and sit around in a circle together discussing their feelings? Did they go out to dinner and go to bed early to wake up at 6am the next morning and go to the 8am Zumba and yoga classes? I don’t know. And to this day, I still have no idea what those people did… but now, as a constantly tired post-grad who occasionally stays in, I have a better idea. But what I don’t have a better idea of is why those people never went out, why those people still don’t go out, and why other people stopped going out after college.

Not drinking is one thing. Although I don’t understand why a person can’t sip on one, single beer or a lone vodka soda at an outing, I applaud them for being healthy and social. Not everyone can drink. Not everyone should drink. But if you don’t have a reason, try a beer. Try a glass of wine. Try a margarita. Live a little. You are only young (and alive) once. It. won’t. hurt. Unless of course you go a little too hard and end up on on the toilet from 6am to 1pm the next day… but I’m not saying to do that. A simple glass of wine never hurt anyone.

Well, actually I won’t say it pisses me off because I don’t really care what other people are doing (most of the time)… but when I hear that someone doesn’t go out I first get confused… then I get angry… then I get a mix of jealousy and dislike. And this is why…

1. People who don’t go out obviously have way more money than me. What do us twentysomethings spend the majority of our paychecks on? Alcohol. Bar/club covers. Dinner and drinks. Clothes to go out in. Shoes to go out in. The list goes on. Even if they make less than I do, they will always have more money than me because WTF are they spending it on?

3. The other way being that they can afford really nice apartments. With really nice furniture. This because they have the money for it… and they don’t have to worry about friends coming over to destroy their belongings because anyone that will come over will be poised, mature, and would never even think about eating food or drinking a drink anywhere but the (very nice) kitchen table. No I have never met anyone who meets the above guidelines I just wrote about, but I assume such twentysomething exists. And if not, I have just created him/her.

4. They look at me (and people like me) like we are immature and stupid, therefore making me (and others) feel uncomfortable. Sorry I drink. Sorry I party. I’m 24 – not 50 with kids. I still got it. And they would too if they tried. The only problem is that they most likely never had it. But, like, why not start now? Why rush life when you can slow it down?

College was a four year whirlwind of parties (and bullshit) and it blew my mind to know that some people just didn’t party. But now after college, it blows my mind even more that people who used to go out just don’t anymore. It’s not like we graduated and aged 10 years. We’re still young. Anyone in their twenties is young. Just ask those around you at work. A lot of people would give anything to be your age – and not so they can go back to sitting on the couch on a Friday night or going to bed early every Saturday. They would kill to go back to the days of getting into clubs and going out to bars without feeling like a pedophile.

In reality, you are the age you act. If you age yourself so be it, and if you don’t you’ll feel as young as you wish to. So although people who neglect going out and drinking occasionally make me feel fat, ugly, lazy, tired, immature, it’s okay because I know (slash think) sometimes I might be having more fun than them. The hangover is definitely worth the fun (most of the time). 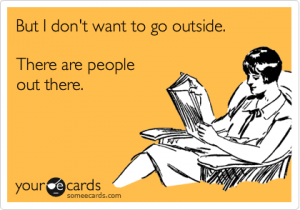 Was Your College Education Worth the Money?

10 Things We Used To Do Online