You have a job and now you have a work email address.  Mazel tov.  This email should not be confused with your personal email.  Be careful what you say.  It might come back to haunt you.

One Friday afternoon not too long ago, Katrina, an administrative assistant in Texas, got some good news at work. On Sunday, she wrote a snarky email to a few close colleagues — or so she thought. On Monday morning, she was fired. Here’s what happened — including just what was in that email.

The story starts with a supervisor in another department, who Katrina says was almost universally reviled, though she had worked for the company for 10 years and seemed to be sticking around for life. She tried to claim authority over issues and employees she wasn’t involved with, and was generally unpleasant to work for. ‘My coworkers and I disliked her, but were thankful that we did not report to her,’ Katrina says. ‘We were friends with people who were supervised by her and always felt bad for them.’

Then, ‘one magical Friday afternoon,’ management fired this disliked woman. Turns out they were unhappy with her job performance, too. ‘There was a buzz throughout our area of the office as employees silently celebrated and tried to suppress their joy,’ Katrina says. ‘Because this happened at the very end of the work day on Friday, many employees in other parts of the building went home for the weekend not knowing this had taken place.’

It would have ended there if Katrina had not opted to receive work emails on her personal iPhone. But two days later, on Sunday night, she was sitting at home on her couch when she received an email from one of her company’s owners. The subject line was “Exciting News,” and it announced a new project. Katrina worked for a private company, and about 300 of 500 employees were cc-ed on the email.

Katrina — you can understand why she asked me to not use her last name — couldn’t resist. She typed out a response to just a few of her close coworkers: ‘I really thought this email titled ‘Exciting News’ was going to be about X getting canned!!!!’ She hit send. ‘I could not deny the snark that was bubbling up inside me,’ Katrina explains. 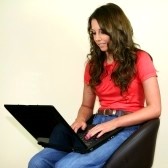 You know what happened next:

A second later when I received that email back in my inbox I realized what I had done. I had hit “reply all.” Stomach in throat. Heart pounding. Sweating bullets. Three hundred people, including upper management and the owners of the company, had just received this email. I wanted to die.

Katrina immediately called a friend in the IT department to see if he could somehow recall the email. (Nope.) She called and texted her boss, but he didn’t respond. There was nothing to do but show up to work the next morning and see what happened.

After a sleepless night, her boss texted her to go directly to HR, do not pass Go, do not collect $200. She met him there, and she was promptly fired for the disastrous Reply All.

The story has a happy ending: Katrina found a new job that she likes even better than the old one. And, she adds, ‘I will NEVER again use a personal phone for work email.’”

How To Look Thin In Photos (Even When You’re Not)

Alternatives to the 9-5: The Rebound Job Masquerading As A Full-Time Gig