Most students get jobs to pay bills or to have beer money. Many choose to work in retail—an unforgiving field but one where jobs are easy get. Students, like any other group that’s unfortunate enough to work in retail, abhor the industry. Retail is awful.

I worked in retail at times in my life. In senior year of high school/freshman year of college I worked at Target as a stock boy. I then moved over to Macy’s and was a cashier for two years (and the de-facto Men’s manager for about a month) until I got a different, non-retail job.

I loathed my time spent in retail. I loathed being cursed out by rapaciously greedy customers and figuratively spat on by careless managers. I had all manner of things thrown at me, I had people threaten to beat me up. I saw some of the worst modern American society had to offer.  But now, at the age of 23, my past experiences in retail have helped me glean a depressing truth: Retail is life for millions of people, and now for millions of 20-somethings.

At Target there was a manager, let’s just call him Dan. Dan was in his 40’s and would always harass my coworkers and I about something called batch times. In the backroom, all items were stored according to what kind of “batch” they were in. For example, laundry detergent was in the “chemicals” batch so it was stored in the aisle with other similar merchandise (cleaning products and the like). Part of being a stock boy was removing items from the batches in the back and bringing them out to the shelves on the sales floor. A computer calculated how long each batch was supposed to take. If you were over that seemingly arbitrary amount of time (the batch time), you’d hear about from Dan.

Bullshit like this didn’t stop at Target. There used to be a metric at Macy’s called “IPT”—items per transaction. If you had a low IPT, you’d get chewed out by management. And I’m sure you’ve all been harassed by Macy’s clerks to open Macy’s credit cards. At my store, supervisors would publically humiliate you at the “morning rally” if you didn’t open enough. Sometimes, managers would threaten to fire you if you didn’t open so many by the end of the week.

All this Target/Macy’s crap drove me insane back then.

“Why the hell does it matter that a batch got pulled in 18-minutes instead of 15-minutes? Were those three minutes really that important? What jerkoff was sitting there and watching my IPT? Who cares about this bullshit,” I vented to a friend. He responded with similar angsty frustrations, his regarding a manager bitching about endcaps—the displays at the end of the aisles. We shared complains until he starkly said, “Think about it, these things are life to our bosses. That’s so depressing.”

Growing up, our generation had a knack for blind confidence. We believed that a college degree would be the shield that guarded us from ignominious “careers” that barely deserved the name. After all, those who worked in retail and similar “bad” fields were uneducated buffoons not worthy of pity. They made poor life choices and paid for it with everlasting misery. This wouldn’t happen to us. We wouldn’t, couldn’t become the dismal worker at a dead-end job. We were educated, smart, and well-read. We were different. To reference A Song of Ice and Fire, we were the knights of summer. We believed that winter would never come for us, and that our sun would shine.

We were wrong. To be precise, 48% of us were wrong. That is to say, 48% of recent college grads are employed in jobs that require less than a four year degree.  37% have jobs that don’t require more than a high school diploma!

I started working at Target when I was 18. Now that I’m about to turn 24th, I can finally understand why Dan the Manager hounded me about batch times, and why Macy’s managers hounded me about IPT and credit cards.

Their jobs were to make sure these goals were fulfilled. If they weren’t, they’d hear about it from the store manager. If the numbers still weren’t met, they’d get reprimanded by corporate. If that didn’t set things right, corporate would pop in for surprise inspections every week or two until the store ran like clockwork. And while all this happened, the managers had to worry about their families and/or finances.

Let’s look at Dan the Manager again. If proper batch times meant Dan kept his job and kept food on his family’s table, then he had no choice but to berate a bunch of greasy, shit-head, know-nothing teenagers and arrogant, equally-clueless college kids about the batch times.

Arbitrary retail metrics weren’t arbitrary to him. They were his livelihood. He depended on them.

As youths, how could we understand this? What did we care about these metrics? What did we know of anything? We believed were destined for education and the gainful employment that it bestowed, not for corporate bullshit. In our minds, we were only working at these places until we graduated, then we could kiss things like batch times and IPT goodbye.

Again, we were mistaken.

Arbitrary retail metrics are becoming less arbitrary to us because, like Dan the Manager, our very lives depend on them.

As hope for a better future fades, we stop aspiring. We stop dreaming. We accept that our menial occupations are all that we’ll ever be. Thoughts of Shakespeare are replaced by plans on how to increase IPT. Dreams of writing novels and composing sonatas wither in the face of batch times and secret shoppers. 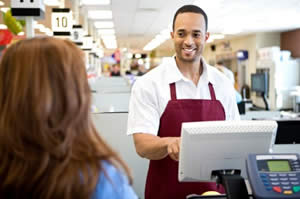 Who Is Red Coat? Our Theories On Tonight’s #PLL Season Finale!

Pretty Little Liars Recap: Mona Made Spencer An Offer She Couldn’t Refuse (and our PLL theories!)