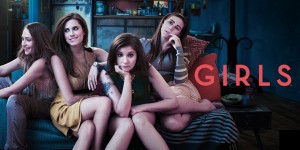 In just three days, our favorite four girls will reunite in a season premiere more looked forward to than any show I’ve ever watched before (okay, that’s a lie… we all know nothing will ever compare to The OC). At first, I wasn’t a huge fan of Girls. Their lives were so widely unrealistic yet at times totally relatable that I couldn’t stop watching. For example, I could sympathize with Hannah when her parents tried to convince her to move home. But when Hannah found her dad lying naked with a hurt back after attempting shower sex with her mom – I did not relate.

Hannah’s first impressions were bad impressions. She was this makeup-less, lower-than-average looking girl still interning on no income while living in New York City (Brooklyn to be exact aka Hipsterland). Sure there are people out there like this… but not too many because unlike Hannah, most people cannot afford to live on their own after having NO source of income for TWO years. Actually I don’t know anyone who can afford to do that at all. Beyond this, Hannah was PISSED when her parents decided to nicely and awkwardly cut her off in the season premiere. Like, are you kidding? If my parents were still letting me get by on my own with no income after being a college grad for two years, I would be mad at THEM. Get a job at a coffee shop… or a restaurant, anything. If you need to intern full time, you can always do something else on the side for money. Including having sex with ugly people, which is something Hannah excels at anyway… So why not get paid for it? But eventually this Hannah character began to grow on me and I got to know the rest of the Girls. After let’s, say three episodes …things. got. real.

Marnie breaks up with this guy she had been dating forever after coming to terms with the fact that she wasn’t actually in love with him anymore. Post-breakup Marnie gets depressed for a few, especially after realizing her now ex-BF is dating some crazy hipster that  galvants the world. Marnie then spirals into a spontaneous party girl who occasionally makes out with girls.

The new fun Marnie will certainly make for an interesting season. Hopefully she won’t get back with Charlie, though. You don’t love him, girl! Even though he’s precious with short hair and even if he breaks up with the BSCB , you don’t.

Shoshana… or should I say ‘Shosh’… left us giggling by the end of the season. She was and is that JAP (Jewish American Princess for those who are picturing a small Japanese girl right now) who talks a mile a minute, loves girly things like SATC, and spent her summers at (Jewish) sleep-away camp. Those who went to a private university most likely know at least three of these kinds of girls. When Jessa (who just so happens to be her cousin – which I never understood because Jessa is British and so NOT Jewish) moved in to her apartment at the beginning of the season, Shosh’s world was rocked. The youngest of the bunch, she is still in college… and she is was still a virgin. At the end of season one, she lost her virginity to Ray – who is her opposite—but was also her ‘crack spirit guide’ when she accidentally did crack at the ‘best party ever’ and none of her ‘friends’ cared enough to take care of her (every 20-something for themself, right?). 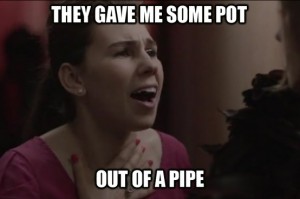 In season two, we hope to follow the shenanigans of Ray and Shoshana but I secretly hope to see Ray completely ignore her now because that’s, like, the most realistic thing that could happen.

Then there’s Jessa. If she wore makeup and wasn’t so weird and hippie, she would be crowned the title of BSCB but these things make her far from betch-worthy. Instead, she gets the title of the token free spirit friend. She has a thing with her ‘boss’ AKA the dad of the kids she babysits and  I don’t understand why. Like, he’s not even hot, definitely not a DILF. He’s just a short, chubby jobless man going through a midlife crisis while living in Brooklyn, with his wife and kids. Jessa does this purely because she loves attention, but how could she stoop so low? Season one ended with her stooping even LOWER and marrying (yes marrying) a guy she met a few weeks ago. You know, the guy who’s rug she casually made out with Marnie on and the guy who freaked out when the girls spilled wine on that very expensive rug. Season two shall tell the tale of Jessa’s marriage. Hopefully… like why she got married… and why she married him. Will they even stay married? As the token free spirit friend, she really can’t stay married. Married people are old, not fun, and kind of suck.

Hannah begins to ‘work’ in season one, but quits her job after dealing with a boss who touches her inappropriately. She doesn’t tell her parents of her troubles though because, like, they’re not going to help her anyway so why have them think she’s an unemployed failure? Her weird-sex partner The boy she was obsessed with, Adam, eventually becomes her boyfriend and all is well… until he starts to do real creepy things like pee on her in the shower and scream obscenities at random people in the street.

There there is Hannah’s self-obsession which gets progressively worse. It even gets to the point where Marnie is forced to move out. But I think, Marnie just used this as an excuse to move out because she secretly thought Adam was a murderer and might kill her in her sleep one night (he might of). So by the end of the season, Hannah is jobless, moneyless, and roommateless… so what else does she lose? Her boyfriend! Hannah needed someone to move in to help her pay rent, but when Adam offered Hannah said no way because, well, she wants what she can’t have. This is even more apparent when Hannah chooses her now gay ex-BF, Elijah, to move in with her over her actual BF. So they break up… which is, umm, fine with me. Except now that I think about it, even though I hated Adam, he better still be on the show a lot because he’s effing hilarious. With Elijah as Hannah’s roommate, he will hopefully be making many more appearances in season two.

If you haven’t seen the season two trailer, get on that now and get yourself pumped up for Sunday night. This season is going to be great. Hannah’s dating a black dude. Enough. said.