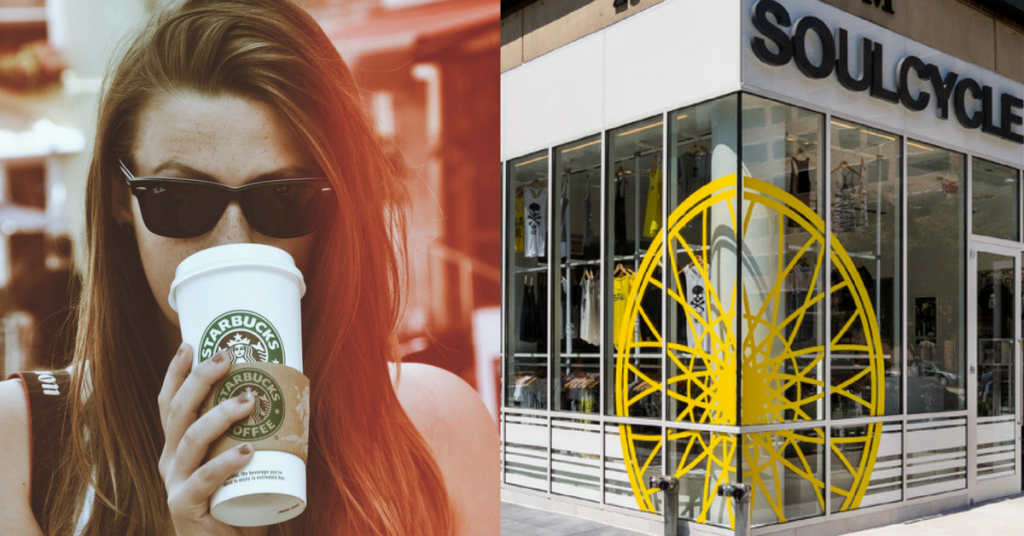 Lately I feel like everyone keeps firing questions at me: “Why don’t you just make coffee at home?” “Why don’t you take fitness classes at a gym instead of at expensive studios?” “Why don’t you buy store brand things?” Well, everyone, I would like to invite you to STFU because 1. I like when coffee is made for me, 2. I like my fitness classes, and 3. I fucking like Method soap and I would buy it over Trader Joe’s brand any day.

I realize that I ball out on a lot of things I don’t need to spend money on, but I “prioritize stuff” so I can afford these things—and I make money on the side that pretty much pays for these things. I’m also still saving money. The way I do this is by putting money in savings directly from my paycheck. If I didn’t do this, I would absolutely spend that money somehow because I have a problem (I admit it), but I’m getting better. So much better, that I can now “justify” all of my expenses.

Here are the things I spend too much money on, and WHY I spend so much money on them. Please enjoy the humor of me trying to convince myself that all of this makes sense, lol, it probably doesn’t. Oh well.

When I got to college, I was introduced to Starbucks. I hated it at first because it was way too strong, and there were no sugar packets that I could down drown the coffee in like I did at Dunkin Donuts. But soon enough I realized that holding a Dunkin Donuts cup was like wearing Aeropostale—whereas holding a Starbucks cup was like wearing Abercrombie and Fitch. This was 2006, people, and I would never be caught dead in Aeropostale. I’ve been drinking Starbucks every day since (except for the two years I gave up coffee between 2010 and 2012), and I can’t quit it. I guess I shouldn’t just say Starbucks. I will go to a good, indie coffee shop over Starbucks if one is nearby and has sugar free vanilla syrup and almond milk.

The cost: This habit runs me anywhere between $2.50 to $6 a day. I usually get flavored (sugar free) iced coffee which is $2.50. I HATE hot coffee, so when it’s really cold out, I have to splurge on a skinny vanilla latte which is $5-$6.

How I justify this: You might be wondering why I don’t drink the free coffee at work or make myself coffee at home. First of all, I don’t want to have to work for my coffee. I want it made for me. I don’t even like putting the milk in my coffee when they don’t do it for me. I’M THAT LAZY. Second of all, going to a coffee shop is part of my daily routine. It spices up my morning and lets me engage with humans before going to work, even if I do not talk to or look at anyone (I usually order my coffee via the Starbucks app). Third, holding a coffee while heading to work makes me feel like a V productive adult who is about to get down to business, Mulan style, at the office. Fourth, if I don’t have an iced coffee to sip on through the day, I’ll get hungry and feel lost and confused. And fifth, I’ll get a headache if I don’t have it. See? This one is an obvious spending need.

My gym routine used to consist of running on the treadmill, elliptical-ing on the elliptical, lifting free weights in a corner, and doing the ‘sex’ machine that works your thighs. But then I got hurt and couldn’t do any of these things anymore, so I gave up the gym and working out… until I discovered Pure Barre. The stretches and exercises at barre actually made me feel better so I got a membership there instead, and I’ve been going ever since.

The cost: I have a year-long commitment contract where I pay $179 a month for unlimited classes.

How I justify this: When I take too much time off of Pure Barre, I start to feel hurt again, so I have to keep going. This class is physical therapy for me. And sure, I could take barre at a gym, but I love the studio and the community at Pure Barre. It’s also across the street from my apartment which helps.  The problem is that I HAVE to go enough times a week for the $179 a month to make sense. Sometimes it’s hard to go after a long day of work—and in between SoulCycle workouts, but as long as I fit it in, it’s fine.

I started going to SoulCycle classes randomly last year, which was fine. But in the past couple of months, I’ve gone overboard. I went from going once a week to twice a week to now three times a week—all while trying to go to Pure Barre enough times a week to justify the $179 a month I pay there. This has been ~hell~ but the endorphins have kept me going AND ALSO the teacher I go to is a fire-emoji human. Like, it’s not that I go to SoulCycle. It’s that I go to James’ SoulCycle classes. This man teaches in Boston and his classes fill up seconds after they become available. It’s insane. But the workout and the music are so good that I’m now investing in this class instead of saving for, like, a home. Cool.

The cost: SoulCycle is expensive as fuck. $30 a class plus $3 for shoes and $2 for water, something I never have and usually buy there. There is unfortunately no membership for unlimited classes because their clients apparently don’t give a fuck about money, so they don’t need to feature any unlimited deals. Help.

How I justify this: Here’s what I keep saying when people ask: “Why don’t you just join Equinox? It’s cheaper.” Instead of going out both weekend nights or out during the week, I go to SoulCycle. So instead of dropping $75 – $100 on a night of food and drinks, I take 3 SoulCycle classes a week. Fucking sue me, okay?

I’m not even sure how I got into this mess in the first place, but last April, I decided to try a month of Rent the Runway’s unlimited clothing rental membership. Basically, I would get three pieces at a time (shirts, dresses, bags, jewelry, coats, etc) and then would send back stuff that didn’t fit right away to get new stuff. Friends had recommended trying it, and I thought it might help my shopping addiction, so I was like yeah sure I’ll do one. But then one month turned to two months and then three months and fourth months… and now it’s December and I’m still doing the fucking thing.

How I justify this: I did this to help my shopping addiction, and guess what? It worked. I definitely don’t shop as much, and when I do, it’s for basics that I wear all the time. I even started selling clothes I don’t wear, and I’ve made just about $600. Also, the price went up for RTR Unlimited because you now get four things at a time instead of three, but I am “grandfathered in” at the OG price so I feel like I have to stay there. Only problem for me is when the stuff doesn’t fit or my size isn’t available in stuff I want to rent. All is good though—as long as I don’t buy expensive trendy stuff I don’t need… and I haven’t! RTR Unlimited is a great way to be trendy without investing in the clothes. Sometimes you have to spend to save 🙂

I have always been a “bar” freak. I went from Nature’s Valley bars to Special K bars to Fiber One Bars to Larabars to Luna Bars and now… Quest Bars. These protein bars have 21 mother fucking grams of protein and somehow they are 4 Weight Watchers points. Compared to the 9 points that exist in one Larabar/Luna Bar, that is NOTHING. They kind of taste like shit unless they’re a little below room temperature (I heard if you microwave them, they’re better), but like coffee, you get used to it.

How I justify this: There are no other bars with this low of Weight Watchers points with this much protein. Costco has knock offs but they SUCK. Worst shit you’ll ever eat. I eat one of these almost every day. They replace a ‘snack meal.’ #Justified

6. Pre-cut veggies from the grocery store

Roasting veggies are among some of my favorite foods (right below pizza and french fries). The only problem I have with them is the time you have to put into cutting, washing, and cooking them (#lazy). So if I can buy them with some of those steps already done, I’m all in. Like, do I want to get home from a busy day at 8pm and start cutting and spiralizing a zucchini—or do I want to buy zucchini noodles already cut and washed? IMA BUY THEM WASHED, DUH. When I go shopping with my mom, she will literally yell at me and take the pre-cut packages out of my cart. One time she forced me to buy a giant cauliflower. I never did anything with it. I need to buy them cut.

The cost: $5 – $9 for less than a pound of cut and washed brussels sprouts, cauliflower, asparagus, veggie noodles, butternut squash, etc

How I justify this: I am busy as fuck and do not have time/the energy to arrive home after a day of work and working out to cut and wash veggies and then put them in the oven to bake for 40 minutes to an hour. It saves me so much time—and if I had to cut them myself, the veggies would rot in my fridge and I would end up throwing them out… and I would order pizza. This is an investment for my health.

I love TV so much that I majored it in college (I do internet for a living now, but how was I supposed to know I liked internet more when I was 18?). It’s an insane thing to me to NOT have the TV available for me to scroll through the guide and then decide I don’t want to watch anything and go back to refreshing social media on my phone. Like, I NEED my TV to let me do this, meaning I need cable.

How I justify this: People are always like, “why don’t you just cancel cable and watch TV through Hulu and Netflix and stuff?” Bitch please. How would I randomly throw on HGTV in the background of my social media checking frenzy? Also, sports. 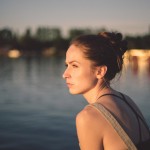 Why It’s Okay To Be Sad About Turning 30 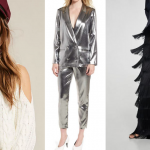