All day I’ve seen blog post after blog post about what you should do during Hurricane Sandy. Some said paint your nails (which I will be doing in the next 10 minutes). Some say get fucking shitfaced. And some say clean. Well, I am here to tell you there are plenty of things you can do during Hurricane Sandy (Cohen) in addition to the above. If you still have power, you can basically do anything you would normally do on a day where you don’t feel like going outside. And if you don’t have power, you’re basically screwed. This social media obsessed freak does not how to live without internet and television so I can’t give you any pointers there. However, what I can tell you is what you should NOT be doing during this storm. Here you go:

1. Go to the beach. You might think this is obvious, but it’s not. People are fascinated by standing on the beach when everyone who lives nearby has evacuated. ‘Like, I heard there were going to super huge waves and massive flooding! Want to go check it out?‘ said many brave idiots all across the northeast coast. Such brave idiots can be spotted on the news as extras on the beach… sometimes even with children. What. is. wrong. with. you. all?

2. Report the news next to the ocean. Natural disasters are like Christmas for broadcast journalists. Local news stations go absolutely nuts over blizzards, earthquakes, tornadoes, and of course – hurricanes. I mean they go nuts when a thunderstorm takes down one single tree. So you can just imagine how they are when a storm approaches. Hurricanes are basically a competition for reporters everywhere to see who can die first. I mean COME ON. You are on television telling us there has been a mandatory evacuation in the town you are in because the water in back of you is going to destroy homes and ruin lives. Yet you are still there. WHY? Well, I’ll tell you why they’re still there: People love watching reporters struggle in intense weather situations. And I hate to admit it, but I’m guilty. I have been watching local news all day. Reporter after reporter after reporter. Who will blow away first? I don’t know. And since we just LOVE watching people in horrible situations, reporters can make a lasting impression with us during hurricanes. ‘Remember when ___ was almost blown away and couldn’t hear the anchors anymore?‘ And yes, now we know your name. Local news aren’t the only guilty ones though. All news stations LOVE IT. They fucking love it.

3. Work. If you don’t have to worry about people dying when you stay home (and you aren’t a reporter being blown away by the hurricane), don’t fucking work. A large glass of wine and the couch is calling your name… not that extremely slow desktop computer sitting in your cube. Even if you had to go into work – just don’t work. Find the beer. Find the wine. Find the food. And sit on Facebook. Done.

4. Complain. It’s not snowing. It did last year and that sucked. So as of now, I’m not upset. And you shouldn’t be either. Hurricanes are a storm I associate with Summer… so extending Summer into late October (almost November) is fiiiine with me.

5. Get into a really good TV show or movie on Television. A lot of blogs say to have a TV show marathon during today’s Hurricane. But, umm, what are you going to do when the power goes out? You’re going to WISH you never turned on said TV show or movie because now you have to wait until God knows when to see what happens next. With that said, do not watch Pretty Little Liars or Revenge. Especially Pretty Little Liars. Shit will fuck you up – especially when it’s dark. You won’t be able to sleep. Believe me.

What else should people NOT be doing during Hurricane Sandy? Oh, and what should I do if the power goes out (other than hand write my next article, duh)? I’ll leave you with this image I found that I enjoy much better than the other Hurricane Sandy image that celebrates Grease. This Sandy is just soooo much better… 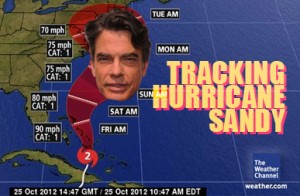