Not having any close friends who are married. Once they start getting married, you might start feeling old but until then, WHATEVS. Even if one or two good friends are engaged or married, you’re not! Or even if you actually are married, chances are, like, no one else is, so WHATEVER. Until you’re settled down into a preggers-suburbia world, you’re young.

Living with roommates. Can’t do that when you’re old. Roommates either don’t exist or are family members. But for now, YOU CAN. Live for the fights. Live for the messy weekend mornings. Live for the sex noises that aren’t coming from you. You’ll cherish it one day.

Paying rent. It may suck, but wait until you have to pay a mortgage. GROSS. Not being committed to things is the essence of being young. You’re basically a nomad, and that’s fine.

Taking shots. There’s nothing that takes me back to freshman year of college more than a shot of hard liquor. Even though I might projectile vomit that shot right back up now, the act of taking a shot makes me feel young. And hey, so does the puking. BLAH, ALCOHOL.

This ecard. People WANT to be 30… and you’re not even that age yet! 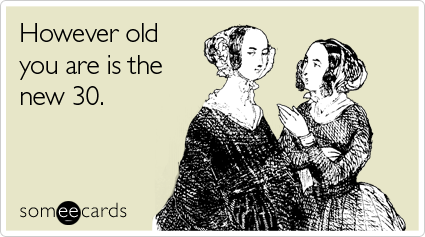 Talking about how many years ago you graduated college at work. I’m SOOOO old. I graduated like three or four years ago. Might seem like ancient history to you, but to everyone else in the office you’re that young broad other women fear will have an affair their husbands. Hottie alert in the office.

Being trendy. Sure you can afford pricier clothing now (wait… no you can’t), but just because you’re done with Forever 21, it doesn’t mean you’re going to start dressing like a mom! Bring on more expensive trendy clothing. You’re like a role model for high school students’ closets, and that’s fine… because you’re not old.

Going to a New Kids on the Block concert. ‘Why is everyone so old and fat,‘ I thought to myself the entire time I was at this concert. But seriously. NKOTB were not from our time. Make way for thirty-somethings.

Going to a LOUNGE. Young people do not generally frequent lounges. They take over bars and clubs where they can get their rage on. Sitting on some fance couch drinking fance (coughexpensivecough) drinks sounds SO boring. No thanks.

The Perks of Being In a Relationship 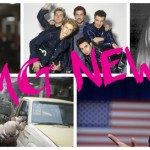