The other day, I asked my 13 year old brother to describe a modern day middle school dance to me via text because I figured times had changed… and I’m weirdly obsessed with middle school dances. He said, and I quote, ‘Everyone stands in circles with their friends in corners, you got the different groups of friends and stuff… People only dance as a joke but grab chairs and hang out and talk and say how they shouldn’t have come but truthfully they wouldn’t be doing anything if they didn’t and then you got a couple kids that will dance with girls.’

Sounds like a middle school dance when you were in middle school right? Yup. Sooo have times changed at all? Well, yes because when I asked him to to name the top 10 most played middle school dance songs of 2013 he said, ‘Biebs, Thrift Shop, Rihanna, Pitbull, Call Me Maybe, T-Swift, Headlines, Can’t Hold Us, and Nick Minaj.’ When I asked about the Electric Slide, he didn’t even know what that was…

But anyway, even though the majority of our middle school days was the same as it is for kids now, there were certainly parts that kids now would be like whaaaaat. I mean, a lot of schools use tablets instead of books (goodbye book covers). Here’s a typical day of a middle school student in the early 2000s:

You might have set an alarm the night before, but you sure as hell aren’t getting up for it. Snooze, snooze, snooze, shut alarm off, YELLING — But wait, what is that yelling? You shut the alarm off… Oh, it’s your MOM. And you have 10 minutes to get to the bus stop! She’s going to freak if you miss the bus and she has to drive you…

Wait At The Bus Stop.

If you actually make it to the bus stop, you will either stand there awkwardly maybe talking to the other(s). Or you will stand there and after a decent amount of time you will realize you missed the bus. Hopefully someone is still home because you can’t drive yourself to school. Or if it’s raining, you were most likely in a car already so now that car has to drive you to school. Sorry parent/driver.

If you made the bus, you sit and talk to ‘friends’ aka acquaintances. It’s really loud, ridiculously crowded (three to a seat), and everyone is seated according to race — unless you were ‘the only black kid.’

Stand Around Waiting For ‘The Bell’

You hang out either outside in front of the school in cliques if it’s nice out… or you sit inside the halls segregated by grade and clique. Things you did before school: Watch fights (the guys loved to fight in the middle of large circles), tape dollz to your agenda, copy homework, take pictures with your large retro/colored/updated Polaroid camera (remember when those made a comeback for a hot minute?), or stand/sit next to your crush without actually talking to them.

Hang Out At The Lockers.

You open your locker with the combination you obv have remembered to find a mess of books with those horrible stretchy book covers or the paper ones that were free (poor kid status) and perhaps some pictures of friends and locker decor (a mirror… a whiteboard… the essentials) from Staples… and if it’s your birthday, your locker may be decorated with a big happy birthday banner signed by randoms. After you grab your books and finish checking your braces out in the mirror, you mingle with the people around your locker and maybe visit a friend’s locker, which is either down the hall or on the other side of the hall depending on your ‘team.’

Fool Around In Homeroom.

You walk into homeroom usually with the same people you talked to around the lockers, because it’s all alphabetical. You may sit on a friends desk and have a very intense chat. You might line up your lip glosses according to color on your desk (I used to do that). You might take pictures of you and your friends with your disposable (or if you were technologically advanced, digital) cameras. And you may sit super silently in the corner because none of your friends are in the classroom.

1st Period (which is probably next door).

It’s time for 1st period! You race to class, even though it’s most likely right next to your homeroom, perhaps stopping at a friend’s locker to chat or your own locker to check yourself out in the mirror one last time. You then have to sit through the class yawning because it’s early. Like, really early. 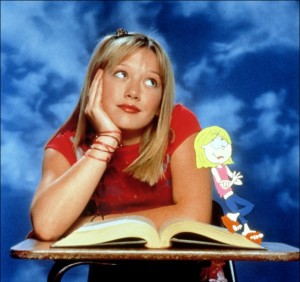 All the other periods.

In math, you have to show your teacher proof that you did the home work by showing you did the work for each problem as she walks around the class. In science, you have to listen to some boring lecture or watch Bill Nye (the science guy). In reading, you have to decode poems by Edgar Allen Poe. In English, you have to… well, do the same stuff you do in reading… read. In Social Studies, you have to… umm, I don’t remember, so that says a lot. Middle school, it was so hard.

Eventually, you take lunch (sometime between all your classes). When the lunch bell rings, you race down to the cafeteria and sit at the same table you sit every day with the same people. You either sit with all people of the same sex, many of which you aren’t actually friends with. You talk about really superficial things and do NOT talk to people seated anywhere else in the cafe. OR you sit with people of both sexes, perhaps a boyfriend, and deem your area in the cafe your clique’s area.

The only subjects you actually care about are obviously the ‘specials.’ You have gym (aka wellness — see below for more info), tech, cooking, chorus (select chorus anyone?), band, electronic music (that class was sooo ahead of it’s time. I took it, of course), study, and more. Everyone wants to have study. If you take too many electives (overachiever status) though, you didn’t get one. You are supposed to use the time in study to study, but instead you use it to copy homework, tell friends inappropriate jokes, gossip, and copy homework. And then there’s art. Why everyone had to art in middle school I don’t understand. Like, if you can’t draw a dinosaur by the time you’re 12, you’re not going to be able to draw a dinosaur. Let’s all get over it.

Gym class in middle school was weird because unlike your elementary school gym class, this one involved a locker room. Like, they wanted you to change. Things could get a bit creepy in that locker room, for instance, when you or someone else was changing and someone would come around opening the ‘changing room’ curtains. Also, I remember playing like hide and seek in that place and running around like maniacs going from changing room to changing room. In the actual gym class, many games were played such as crab soccer, dodgeball, sit-in-the-corner-and-not-do-anything (hehe, my favorite), and more.

No matter what language you were taking (Spanish, Latin, German, French), it was always a joke. You never really cared. Like, I took Latin. All I learned to say was how to kill the inhabitants (neco incolae). Yup, I still remember.

On weekdays, you would either head home on the bus to do homework and/or go to one of your many activities… or you would ‘stay after’ for something such as play practice, detention, or to hang out with people outside even though you told your parents you were getting help in math. You told them mid-day by calling them on the school’s pay phone too, because you obv didn’t have a cell phone. On Fridays, you sometimes stayed after for the school dance and went home to prep yourself for the night dance. Or you want to friends’ houses packed on their very crowded, rowdy bus home. Or you walked to friends’ houses and roamed the bad streets of your quiet, boring suburbs. Horrible pizza place in the center of town, here we come…

For a while, we spent our time on AOL… and eventually we moved over to AIM. We decorated our profiles, chatted with friends, and well that’s basically it. When not on the computer, we spent time chatting with our crushes on our landline phones hoping and praying that our parents or siblings didn’t pick up another phone in the house. Oh, and sometimes we did homework. But, like, that wasn’t important. 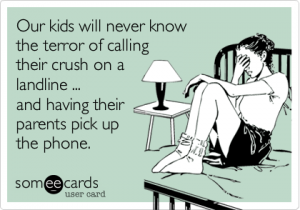 Middle school was pretty wild back then. You would think it’s completely different now with texting, cell phones, twitter, and the pure fact that children are way more ‘mature’ — or just know way too much at their age now — but it still has the same principals. Awkwardness. Braces. Cliques. Specials.

Long live middle school… and Britney Spears… and Nsync… and BSB… and 2gether… and the early 2000s in general.

Must-Have Monday: To the Beach