After school, practice, work, detention, and what-not were over for the day, our high school selves (and middle school selves) lived on the Internet. We literally would throw our backpacks down and go sit at the computer for an endless amount of time every single day. Even on weekends. We used the Internet for multiple reasons. No — there weren’t as many things to use it for back then, but we always found a reason to sit there for hours at a time on a daily basis.

Here was our daily Internet schedule during the school week:

630 – 7am: Before we had to leave for the bus stop or heard the honk from our ride to school in the driveaway, we HAD to check AIM. We checked it to see if we got any IMs since we put up last night’s away message. We didn’t, because we went to bed at the same time (or after) everyone else… and we only gave it, like, five hours to change. The way we used to check our away message window was equivalent to the way we now check our Facebook notifications — it barely ever changed because we would check every five seconds. In the morning, we would take off our ‘sleeping’ away messages and immediately put up a new one stating that we were at school and to ‘leave it’ – whatever that meant. I mean, really… what was it that people were supposed to leave? To this day, I’m clueless.

7am – 2pm: The only social interaction we had was face to face during the school day. As in, no texting and no calling (unless we used the pay phone). We really couldn’t use cell phones in class — and we really didn’t have a reason to. Most people didn’t have texting, and like no one had Internet (except maybe our dad on his ‘sidekick’), so there was no point of using the phone at school anyway. The only online time we had was when our class went to the computer lab and we snuck on AIM Express and IMed the person sitting next to us because no one else was on the computer (except for people who were at home sick).

Post-school/practice/whatever: The night was our time for full throttle Internet use (as were weekends and ‘sick days’). After school and after we were done with all our resume-building extra-curriculars, we went home. Once we arrived, we dropped our bag and jacket by the door and made a beeline for the computer praying to whomever it concerned that our mom didn’t shut off the computer and our brother didn’t sign us off while we were away. Because if they did, we would NEVER get to see who responded to our away message when we were at school and practice and even the orthodontist (even though no one probably did). 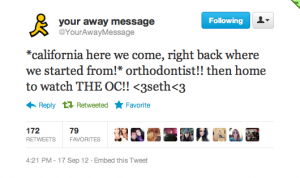 If we weren’t signed on to AIM anymore we would freak out even though that household desktop computer wasn’t actually ours. We would then sign ourselves back on and sit still, staring at the screen for the rest of the night. On some nights we would take a break to retrieve our plate of dinner, which we would then carry back to the desk and eat while starring at our crush’s screen name on our buddy list seeing if he would put up a really cool away message or, like, change his profile. We obviously didn’t speak to said crush. Duh. So we didn’t have to worry about him possibly IMing us… even though that was ultimately what we wanted.

The only other time we would leave our social headquarters for the night was when a sibling decided to kick off us the computer. They asked us if they could use the computer. We said no. They begged. We still said no. They asked our parents. And mom and dad said get the EFF off the computer, so and so needs time to look up ___ for their book report. Yeah right, they were obviously just trying to sabotage our social lives by making us miss an hour of quality time spent starring at a computer screen engaging in conversations consisting of ‘hi’ ‘hi’ ‘what’s up’ ‘nmu’ ‘nothin’ ‘cool’ — the conversations usually ended there. BUT THERE WAS, LIKE, SUCH A POINT. Don’t they know we’ve been waiting 5 months for our crush to IM us?! Today could be the day!

Time online at night was spent doing different things… Those things being:

1. Updating our profiles. Initials of friends were updated on the daily, as the people we interacted with at school changed quite often… and inside jokes had to be kept current. Not to mention, the interface in which this information was displayed had to look good at all times. Finding the perfect color combination was essential, for everyone knew the profile with the black background and red writing (font: arial) was way too hard to read. I mean, come on. Didn’t you want people to look at your profile? If there was something subtle you were hiding in your profile, like a really deep and meaningful quote dedicated to the crush that doesn’t know you exist and would therefore never look at your profile, this was okay (white on white writing — they would have to scroll over the text to see the message — LOLZ). But as for the rest of the profile, a hot pink background with a white font color or a blue background with a lime green font color would do.

2. Creating and decorating our subprofiles, which were decorative and held much more information (i.e. friend’s initials and inside jokes) than our little profiles. The link to our subprofile was in our regular profile and thanks to some brilliant asshole, we could see everyone who viewed our subprofile and how many times they did so. The bad thing about this was that when we clicked a subprofile, the person would see we did so too. Many idiots did not figure out the way around this, which was simply to right click, copy and paste the link into the IE dashboard, and replace our screenname with something totally random. Did ‘youreabitch’ ever frequent your subprofile? Yeah? Well… turns out they were just fucking with you! Sry 🙂

3. Adding the most perfect song lyrics to our profiles and away messages. We would surf the Internet for lyrics that totally described how we were feeling at that exact moment. Whether those lyrics were profile worthy or away message worthy, it was a big deal. It might have been a Friday night you were spending at your friend’s watching a movie and you felt that R Kelly’s Ignition totally agreed with you (even though you had never had sex or a sip of alcohol before)… or you could have been mopin’ on account of that crush that didn’t know you existed and went for Death Cab lyrics — ‘And you can’t find nothing at all, if there was nothing there all along.’ I spent a decent amount of time in high school on AZLyrics.com and songmeanings.net trying to find out what the hell each and every song meant. Like, every grunge sounding song from the 90s. They were just so… deep. We were all like a bunch of mother fucking prophets in high school with such ‘meaningful’ lyrics in our profiles. ‘All the love gone bad turned my world to black, Tattooed all I see, all that I am, all I’ll be…‘ I get that it was/is an awesome song, but like… what did that even mean to us?! Were we just ragingly depressed due to a bad grade on a math test… or was something bigger than that going on? Because I doubt it.

4. Myspacing. Before Facebook came around and became the thing for everyone, the super cool social networking site was the ever so creepy MySpace. We spent a lot of our time in high school taking the creeeeeeeeepiest selfies with our large and in charge digital cameras, most often from an upward angle to ensure we looked as thin as possible. We would often put lyrics as the caption of our photos to describe our ‘mood,’ which was rarely ever happy. Hello teenage angst. We would also stalk people… like legit search for anyone and everyone just because we could. Nothing was private. We boosted our self esteem when we received messages from creepy fat old men who told us how beautiful we were and we listed our friends in order of importance in the top friends section. We also found really cool, unknown bands on MySpace and then followed them to local battle of the bands concerts… Or at least I did… Whatever.

5. Other weird shit. Livejournals were a thing for people who enjoyed wearing black and being sad. Those were, like, really dark, depressing blogs that no one wanted to read except ourselves. After Napster went away, we had to use free, illegal services like Kazaa and Limewire to get our music. And we haaaaaad to get music in order to be cool because listening to music, even if you didn’t actually enjoy what you were listening to, made you cool. With this music, we would create ‘mix CDs,’ which we would play in the car. We had to make sure there were a couple good songs to choose from as our entrance music into the school parking lot. What we listened to as we rolled into high school was very important. We made playlists for such CDs on iTunes and also, if we were lucky, uploaded all this music (or all the music that could fit) onto our super cute iPod nanos and/or classic black and white iPods. In high school, we didn’t create web pages (expage… angelfire) anymore or play with ‘dollz’ (yes, dollz) because that wasn’t cool. We legit just sat in front of the comp pouring our feelings out to the world wide web via song lyrics and one word AIM conversations. Ugh.

As we look back and laugh at the stupidity of our obsession with AIM and all the other things we used so intensely in high school, we have to wonder: will we someday look back and laugh at our obsession with Facebook? Twitter? Blogging? Tumbl-ing? Will something way cooler, way more advanced, way more social come around and make us feel seriously old?

Must Have Monday: Spring 2013 Nail Polish