Oh Nick at Nite… or should I say nick@nite — the modern, stylized version of Nickelodeon’s classic ‘old school’ time slot. Nick at Nite first came on the scene in 1985, but it didn’t get big until we started watching in 1995. Or at least that’s what I will keep telling myself. I used to think the shows on Nick at Nite were so old. They were shows my parents watched. They were shows that took place in the 50s and 60s. And to me, that was ancient times. But it wasn’t. When I first found out Full House, The Fresh Prince, and all my beloved 90s Nickelodeon shows were going to be on Nick at Nite, I was like whoa whoa whoa. It is far too early too be labeling MY childhood shows as OLD. I thought they just quickened the process of getting shows on Nick at Nite and that the featured shows were becoming younger… but they weren’t. I was/am just getting really effing old. Ugh.

Full House first aired in 1987 — that was 26 years ago! In 1995, 26 years ago was 1969. So yeah, we might not want to admit it. But Full House is on Nick at Nite’s level. It’s old! So why did I find the below shows older than they were? Maybe it’s because technology has advanced so much that these shows look old and fake… Or maybe it’s because people now do and say anything they want on television so these shows portrayed an extreme culture shock. But whatever the reason, these shows were good. And they kind of hold a place in my childhood as well… Here are some of my favorites:

Originally running from 1951-1957, I Love Lucy was actually old when it first aired on Nick at Nite in 1994. Over 40 years old to be exact. It wasn’t even in color. I remember thinking Lucy was hilarious because all she did was whine to her husband and cause trouble. She also always seemed to get what she wanted, which was pretty admirable. My memories from the show include Cuba, singing and dancing, Fred and Ethel, and the time Lucy stole chocolate (below).

Twenty six years after The Brady Bunch first aired on television, our generation got to experience it thanks to Nick at Nite. I watched The Brady Bunch all the time, but my most prominent memory from watching it didn’t have anything to do with Marcia’s popularity or Jan’s akwardness… It was my mom always having to announce what episode it was in the first 5 seconds of the show.  And that is disturbing because Full House is now on Nick at Nite… and that show first aired 26 years ago as well… and I have to announce what episode it is after the first couple of seconds because that was my favorite childhood show. IT HAS COME FULL CIRCLE. We are that old.

When I watched Happy Days as a ‘kid,’ I always thought it was this super old show. I mean, it did take place in the 50s. But… it really wasn’t that old. Happy Days was only twenty-two years old when it first joined Nick at Nite’s lineup. And it’s last episode had just aired twelve years prior. Now think back to twelve years ago. 24, Scrubs, and Lizzie McGuire were appearing on the scene. Could you imagine those shows on some ‘classic TV’ program that kids would deem as ‘old?’ Probs not. But regardless, it was a pretty cool show. It made the 50s seem like the best time ever. The Fonz was super badass in his leather jacket, although now that I look at him those sideburns are slightly terrifying. I remember people watching old school TVs in living rooms, people spending time around jukeboxes, and people hanging out in an apartment (was it Fonzi’s?). Later on, Happy Days got a spinoff — Mork and Mindy… which was about aliens and starred Robin Williams. Does that even make sense?

Okay, so I used to watch this show all the time when it was on Nick at Nite… and I thought it was originally on TV long before it actually was. I had no idea this was a late 80s/90s show! Like, it first aired the year I was born… a year after Full House first aired! I wonder what made The Wonder Years join Nick at Nite’s classic line up at such a young age. I mean, I’m upset that Full House is considered old now… but The Wonder Years was old before it was even old. Makes no sense. But anyway, what a great show. Isn’t it funny that Fred Savage (who played Kevin Arnold – duh) played basically the same role as his brother did on Boy Meets World? The shows were just set in different eras. So who was hotter? Kevin Arnold hands down. The trade off was that Kevin had an ugly BFF and Corey had a hot BFF. As for the GFs, Winnie was the hottest child ever… she made Topanga look like Jan from The Brady Bunch. Like, how was a pre-teen girl that good looking? She wasn’t even pretty. She was just really fucking hot. #LittleGirlCrush #ItsFine 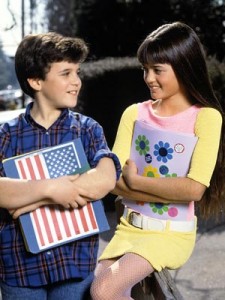 This 60s show was decently aged by the time it came to Nick at Nite and I would occasionally watch it, as I was an avid fan of Nick at Nite and watched pretty much anything that came on the TV screen. The problem is that all I seem to remember about this show is the horribly annoying and catchy theme song and the fact they were stranded on an island. I don’t remember Gilligan looking like such a G, though, as he does below in that rapper pose surrounded by hot bitches in bikinis. I mean, that picture is not the show I remember at all. 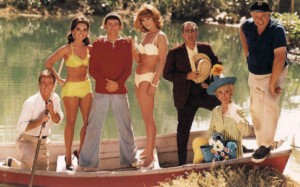 This late 70s/early 80s comedy was pretty hilarious for it’s time. John Ritter (RIP) played a single man who was pretending to be gay in order to live with two hot girls (Janet and Chrissy). The landlord, Mr. Furley, believed and was totally okay with all of this. I remember thinking this show was hilarious. Also, I vaguely remember (after reading about it on Wikipedia) that the girl who played Chrissy got fired and then was replaced by other random girls. Weird. 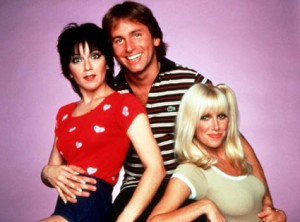 I liked Bewitched because the star of the show had the same name as me – Samantha. That was almost as cool as the time Michelle wore these Limited Too overalls that I had on Full House. But anyway, Bewitched was, like, good and even though it was slightly supernatural it wasn’t as unrealistic as I Dream of Jeannie (NBC has been competing against ABC since 1965 – just saying). Samantha the witch married a mortal man (the word ‘mortal’ really reminds of Charmed — anyone?) and then tried really hard to be a ‘normal’ suburban housewife… because back then, it was normal to be a suburban housewife. Samantha was also pretty. And yes that’s all I remember about the show. That and the word ‘warlock.’ Ahh.

I Dream of Jeannie

This was by far the weirdest thing to grace the Nick at Nite screen ever. A 2,000 year old genie whose master is an astronaut? This show was NBC’s way of competing against ABC’s Bewitched and boy was it way more creative. Jeannie’s master made her stay in the bottle most of the time and occasionally would let her out when he, like, wanted dinner and sex. Really? Well, not on the show – but in real life, we know that’s what the writers were thinking. What kind of sexist joke was this show? Okay and now for a fun fact that I found on Wikipedia: I Dream of Jeannie first premiered in 1965 on a Saturday night at 8pm… A network show airing on Saturday night?! And I thought the fact we used to watch SNICK and TGIF was weird. Soon enough, TV shows are going to premiere online for us to watch whenever we get around to it. And that’s not a joke. It’s true. 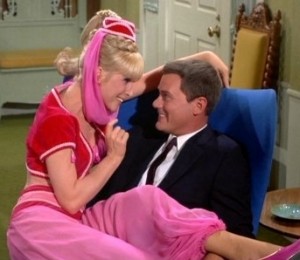 Along with the above shows, there were tons of other ‘old’ shows on Nick at Nite back when we were kids, such as The Mary Tyler Moore Show, Mister Ed (that show with the horse — what was that?!), The Beverly Hillbillies, Cheers, The Facts of Life, and Laverne and Shirley. But were these shows really ‘old’ at the time? Well if you consider us 20-somethings old, then yeah they were old. But if we’re going to agree — we can’t get mad and complain that Full House and The Fresh Prince aren’t old enough to be on Nick at Nite because, well, they are. Ugh.

What else did you used to watch on Nick at Nite? Do you watch any of the shows on TV Land now? Because the other day, I watched a Happy Days marathon. That was weird.

Can We Survive Being A Generation of Interns?

I Am Woman: Ellen DeGeneres