Moving off campus in college is not the same thing as moving out of your house as an adult (umm, well recent grad). Your furniture isn’t there for you. Your parents aren’t willing to help you as much, if at all. You don’t want the place to be a dump since you’re not a college student… meaning you want your furniture to look nice and you want framed pictures on the walls, rather than posters. In addition to this, you are working full time. So you’re either taking time off of work to move OR you move over the weekend and then have to get everything else done after work during the week. No matter what, it’s stressful, expensive, and tiring. 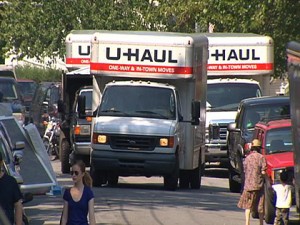 To make moving a better experience for you, here are just some of the roadblocks I encountered while moving out AND some tips to avoid them:

If you don’t have to move in on the actual move-in day, don’t. Every year on September 1st all hell breaks loose in Boston. Since the city pretty much runs off of college students (and recent grads who wish they were college students), almost all leases start on September 1st – making it the city’s communal “moving day.” When I graduated college, I moved back home and eventually signed a lease beginning – you guessed it – September 1st of this year. Of course, there are some leases that begin on other dates, but if you want to live with friends who already have an apartment, they most likely will have to pay rent until August 31st. Therefore, the cycle for moving in on September 1st will forever be a Boston ritual. I didn’t have to be out of my house by a certain time so I spaced out the moving out process. I took one trip a day with a car full of my belongings until everything was moved. This worked for me, but not everyone has that opportunity – so if you can do this, I totally recommend it.

Before you sign a lease, get confirmation that the apartment is wired and ready for Internet. Check with the former tenants if you get a chance. Also, TRY to get something in writing saying this. If you have read my previous posts/tweets you most likely know that when I moved in to my apartment (almost two weeks ago), we found out that our apartment needed to be rewired for Internet. Comcast installed cable and then failed to install Internet because of the rewiring that needed to be done. We immediately called our management company and told them the news, but they wouldn’t help. All they told us was that no one else was having that problem. We later found out no one in the building had Internet. After we all tried to get SOMEONE to help us fix it, Comcast came to the rescue. Our management company did nothing to help though.

Find out about your management company/landlord before you move in if possible. As I said before, our management company wanted nothing to do with helping us fix the wiring for Internet, when we signed leases saying it was wired and ready for Internet. Was it our problem? No. Was it their problem? Yes. You’re going to have to step out of your comfort zone and be firm and angry on the phone in these situations – you’re an adult now. You can’t pass these problems off to anyone else. And you can’t sit back and let someone walk all over you when you’re paying them.

Read through (do not just skim through) the “renter’s handbook” and find out any policies about what your apartment is wired for,  what you might have to do to get Internet, etc the day you move in. Our management company locks the door to the cable room and only will come open it for a cable provider Monday through Friday between 9 and 5. Of course, we all work then and as recent grads, it’s not so easy to take off work for that. Even if you can “work from home,” you can’t – because you don’t have Internet. Our management company made us pay 50 dollars for them to come OPEN A DOOR on the weekend. Although this policy is ridiculous, it’s in the handbook — However, they were screwing us over with the Internet issue, so that policy should have been done with. It’s fixed now though, so we are done complaining.

Know you’re going to spend a LOT of money. I didn’t even have to buy much furniture for my new apartment, and I still spent a fortune. I brought a dresser, bookshelf, nightstand, television, and drawers from home – but I did buy a desk, desk chair, shoe rack, hangers, lamp, etc. I also spent (am spending) money on various decorations – for instance, picture frames, full length mirror, mirror to hang on the wall, pictures, ETC – Not to mention items NOT for my room. Luckily, one of my roommates had a kitchen table, chairs, loveseat, chair, living room television, and tv stand. I did put money in for the couch in the living room, though. And with all our already owned kitchen items combined, we were set. Other things I spent money on included a shower curtain, rug, toothbrush holder, and other assorted kitchen items we were missing…. Oh, and don’t let me forget groceries!!! Especially the food and condiments I won’t be buying for months after they run out. So far, I have probably spent around 2 grand or more – with more to deduct from my bank account soon.

If you have to get a moving truck, get one well in advance. I didn’t have to get a truck, but some of my friends did. If you wait to book one (especially on September 1st in Boston), you will most likely be truckless. If you have to be out of your apartment August 31st and can’t move in to your new one until September 1st you will need a truck overnight, or else your sh*t will be screwed.

Pay your fees on time (by check) OR find out what will happen if you don’t. Our realtor failed to tell us this, but if we didn’t get all of our money to him before a certain date, we would only be able to pay in a money order or bank check. Also, make sure you pay by check so you have online records of them signing and depositing the check – just in case they enter in your payment information wrong and try to say you didn’t pay.

If you’re starting to look at apartments and you see something you like, be prepared to sign the minute after you see it… or else it will be gone. Just don’t settle. It’s not worth it, unless you HAVE to find somewhere to live ASAP.

What are your suggestions for moving in to a new apartment? Have you encountered anything you wish you knew about before you moved?