The pre-show/red carpet made me feel older than I have ever felt before. Lucy Hale, who I love, was a pre-show host and she fangirl-ed when she met Taylor Swift because they both love country and they both were born in 1989. I was born prior to 1989. Two highly successful pop culture princesses were shooting the shit on a red carpet in Los Angeles and my old ass was eating veggie straws in an oversized shirt from Target on my couch watching this happen. Help.

Also at the pre-show was that girl who sings the “Shower” song that you may or may not have heard if you listen to top 40 radio. Her name is Becky G and she is 17. That means she was born in 1997. AND SHE IS ALREADY MORE SUCCESSFUL THAN ME. Guys what am I doing wrong? Along with Becky as VMA “beauty insiders,” was a YouTube star/beauty blogger — because that is an actual legitimate celeb-status job now. WHERE IS MY VMA INSIDER GIG??? Seriously where is it?? I would be so awkward. Does anyone want to pay me to be awkward? I would maybe bring my 5 foot giraffe that I purchased this weekend from Homegoods because I am NOT a celebrity and I spend my weekends doing stuff like going to Homegoods. Help.

Katy Perry also casually showed up in a Lambo with some dude named RIFF RAFF. They literally wore exactly what Brit and Justin wore to the VMAs — 90s style denim suits. Katy Perry scored 100 points in my book for that… because BRITNEY AND JUSTIN FOREVER, duh. She knows.

Then the show began… Here are all of my notez:

After Ariana Grande opened the show with an awkward Zedd-less version of “Break Free,” we entered the jungle for Anaconda. Somehow Nicki’s anaconda did not look like the same anaconda from the song’s album cover… Like, WAS IT PHOTOSHOPPED?!?!? IT WAS?!?!?! GUYS. NO. IT MUST BE REAL!!!!

Meanwhile, in the audience, the Kardashians were not impressed, texting away. Don’t you know, Nicki? THEIR ANACONDAS ARE BIGGER THAN YOURS.

Then Nicki had a wardrobe malfunction. Also, the audio still sucked.

Snoop Dogg came on stage next. Snoop could make the next hit song just by talking. SNOOP FOR PRESIDENT.

Taylor Swift eventually took the stage to perform THE CATCHIEST SONG EVER, “Shake It Off.” It was a lil awk as she tried to make fun of all the people who go all out for VMA performances… but like come on Tay. Your performance was amateur hour compared to Queen Beys. WHO’S WINNING THE MATCH NOW?

And Gwen Stefani finger clapped for her. FINGER. CLAPPED.

Jim Carrey & Jeff Daniels took the stage to revive Dumb & Dumber. No one watching the VMAs knew who they were, including the majority of celebrities in attendance… For example: Becky G, Kendall and Kylie Jenner, 5 Seconds of Summer, THE LIST GOES ON. Jim Carrey also did this:

Next, Kim K’s tits announced the next performer… who just so happened to be her good friend, Sam Smith. #BFFS? Sam Smith was also PHENOM.

Then the OITNB cast was on stage and I lost my shit because Uzo got into character. CRAZY EYES IS LIFE.

Miley redeemed herself as a good person who just so happens to always be stoned when she had a homeless kid accept her award and give a speech about homeless people. Did it make you cry? GOOD. (Katy Perry doesn’t understand what is happening)

Beyonce then performed for 20 minutes.

And Jay and Blue Ivy watched in the audience like it was a casual fam outing. Just watching mommy hump a chair on national television, NBD.

Then they both got on stage and presented Bey with her award. Jay and Bey kissed. The world swooned.

THE ROYAL FAMILY LIVES ON.

But, like, they’re probably still getting divorced. WHAT DO YOU THINK?

100 Thoughts I Have At Networking Events 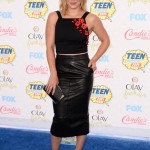