…Because have you SEEN Fiona get finger banged on the L train in Shameless???

Like I would’ve gotten Mike wasted so I could F Emmy Rossum on that triple date.

But, other than this new role in Shameless, Nick lives in LA, and ummmm has cameoed on Newsroom and an episode of Army Wives.

Get used to him on Sundays…he will be around until sweet Steve returns from being kidnapped. 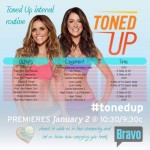 Twenty-Something’s Love: Tone It Up

The 5 Best/Worst Things About February