American society likes to make a big deal out of college graduation but, in reality, it’s little more than a meaningless coming of age ritual.

After graduation, college seniors go from cultured men (or women) about town to “kidults” mooching of their parents—from promising leaders of tomorrow to jobless, hopeless, moneyless, indebted, broken people.

One intrepid but cynical college graduate drew attention to this fact with a poignant graduation announcement. She announced her graduation from Utah Valley University and her entry into unemployment. It was brilliant. In one image, she summed up that graduation was worthless. 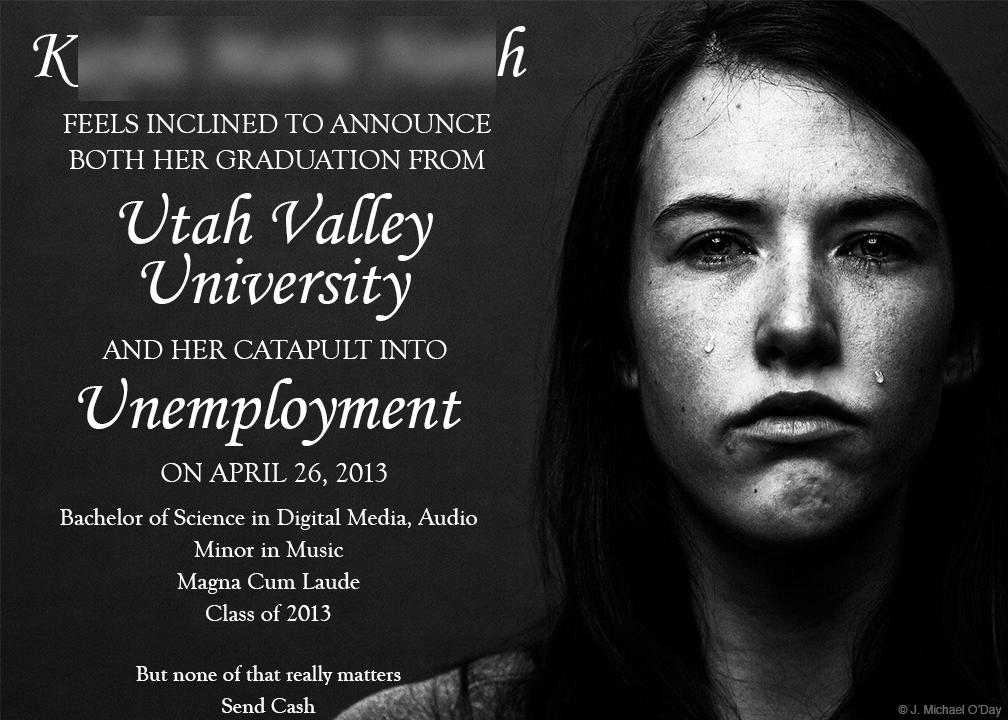 How can graduating from college have any positive aspects in 2013? How can people think it’s actually meaningful and want to have parties for it?

A graduation from college only means one thing: that someone graduated from college. In 2013, that accomplishment isn’t special. Fifty years ago, graduating college would be something to celebrate seeing as college degrees weren’t quite as common. But now, even the cashiers at McDonald’s are college educated.

Thus, college graduation means as much as elementary school, middle school, or high school graduation. It’s just the last in a series of meaningless hoops that the vast majority of society jumps through. Yet, for some reason, people insist that it means more than the others.  However, in reality, it doesn’t. The bloated, disgusting, costly college graduation ceremonies symbolize the bloated, disgusting, costly state of the post-secondary education system in the United States.

The best thing we can do is stop pandering to recent grads so that the delusion that graduating is meaningful starts to die out.