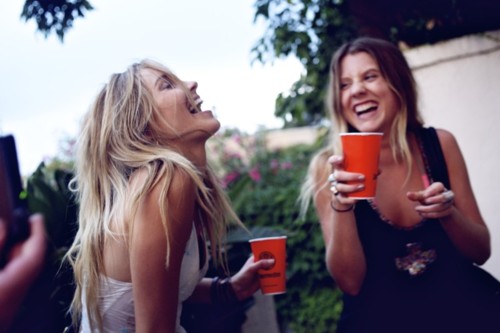 I left Ithaca, New York at the very end of May 2010 a week after graduation to move home. I had no job lined up, no interviews scheduled, and no idea what was to come. Since then, I’ve had a couple “real” full-time jobs, I’ve made more and more money each year, I’ve lived with roommates, I’ve lived with a boyfriend, I went through some shit, whatevs.

A lot has changed since May 23rd, 2010. I mean, I would never wear any of the clothes I was wearing back then… and my brother who is going to be in high school next year was only 10 years old. So despite the fact I feel like nothing has changed since that day, it has. Here are some things I’ve learned (in addition to “starting an online magazine can progress your career”) in the past 4 years… and some things you should try to learn too:

Ferris Bueller was right. Life moves pretty fucking fast. I had all these things I said I was going to do by the time I was 25… and I still have all these things I say I want to do by the time I’m 30 (most of those things are the same things I tried to do by 25). But instead of saying I’m going to do things – and getting caught up in thinking about HOW I’m going to do said things – I’ve learned to just DO. Not talk about it. Not complain about it. Just do it. LIVE LIFE. If you don’t, you’ll turn around one day and be like oops, I just missed my entire 20s. I do NOT want that.

Don’t get caught up in going after a job just because of the title, or because you think people will be jealous you’re at a certain company. Don’t take a job just because you want to move to a new area and the job is there, or because they’re offering you an attractive amount of money. Take a job because you want the job. Because you are excited about what the job responsibilities entail. Because it will challenge you. Because you think it will lead you somewhere. Of course, for your first job, take what you can get! But if you’re job searching with a job, don’t accept anything on impulse. This is your life. Jobs are not college. They are not going to end in four years. Remember that.

Channel your inner Sheryl Sandberg and lean the fuck in, whatever that means, which I assume means ask for more money, but to each their own. Anyway, never settle. Always ask for (and EXPECT) more. More money, more responsibilities, more challenges, more love. The worst that could happen is nothing, right?

Seriously. Do you know how much I want to go back in time and stop myself from buying trendy shirts and dresses and shoes that I would never actually wear or only wear once?! Do you know how much I wish I stayed at my parent’s house longer than just a year before moving out? I for some reason thought the more money I made, the more I would save. But no. The more money you make, the more you will spend. I think I will basically be forever broke unless I stop spending so much and start saving. So, that’s a thing.

I knew about that “networking” thing in college, but I didn’t know how important it was. I thought networking was just staying in touch with the people you worked with at your internships, and even though I knew that was probably important, I figured LinkedIn would cover me on that front. The past couple years I’ve learned that networking is so much more than that. It’s meeting a random at the bar and getting their business card. It’s introducing yourself to a friend of a family member online and inquiring about their career, so later in life you can always reach out to ask for a referral or advice. It’s keeping in touch with friends and sending emails about jobs. It’s making people know who you are, and making sure they think of you for future opportunities. Network with anyone and everyone. You never know…

So much sodium. So much bloating. Sure I was eating like no calories, but was I eating healthy? NO WAY. In the past 4 years, I’ve learned how to cook REAL food — like use a crock pot and shit — and clean up after. I’m so domestic yalllll.

7. Don’t make enemies in the workplace.

Be professional. Be nice. Even to people you don’t like. Don’t burn bridges. Don’t fuck people over. Even if someone fucks you over, be the bigger person and be cordial. You never know what could come back to haunt you – who could be working where later in life – who could be a hiring manager at a place you want to work. You get the point.

8. Stop comparing yourself to others.

Don’t get upset because other people are making more money than you… or “have a better job than you” (that’s in your head, btw)… or are living in a nicer apartment… or… you get the point. This is YOUR life. Not theirs. Everyone progresses through life differently. Connections, luck, timing – they’re all factors. Your life will come together when it does… Stay ambitious and success will come.

I think the most valuable thing I’ve learned (and am still learning) the past 4 years is to STOP GIVING A FUCK about other people. I’ve written this before… and I’m going to write it again… your 20s are probably some of the only years in your life where all you have to worry about is yourself. Until you have other people to actually start worrying about (aka kids) and REAL things to actually start factoring into your life decisions (aka mortgages, bills, a marriage, etc), DO YOU. If you want to go out, go out. If you want to stay in, stay in. Do what appeals to you. Don’t just do something because everyone else is. At first, you may feel like you have no friends but – newsflash – you do.

There’s no way around it. It just sucks. But accept it. The more you keep pretending you’re an age you’re not, the more upset you’ll be when reality kicks in and everyone is married and you’re in a neon crop top drinking a red bull vodka all like WTF.