When it comes to awkward crushes and embarrassing run-ins with a Facebook poker that won’t stop, there’s really no way to control the situation. Most of the time, we have to let it run its course and pray for the day when the creepy stares and uncomfortable winks come to an end. They end for lots of reasons. People lose interest and move on to another pair of great legs. They move to a different state and are forced to forget about that one special crush. The spring semester comes to a close and the summer brings a new set of romantic possibilities.

But what happens when it’s with a co-worker? Unfortunately, unless either of you is planning on quitting, no one is going anywhere. You’re obligated to interact with that person 5 days a week, for up to at least 8 hours per day, making it impossible to escape the irritating predicament you’re faced with. So while you’re making subtle (yet desperate) attempts to dodge your semi-stalking co-worker’s advances, you also have to figure out a way to function with this person and get your work done. As if the mundane distractions aren’t enough of a reason to throw a middle finger up at the work day by 3 o’clock every afternoon, you have a not-so-secret admirer eye-banging the hell out of you.

If you’re anything like me, telling a creepy guy off is simple and uncomplicated. You look into his eyes, try not to laugh, and politely ask him to leave you alone. When that doesn’t work (because it’s never as easy as this), you turn into a mega bitch, and destroy any fantasy he had that the two of you would ever communicate beyond the present set of circumstances. Find a few key phrases, scare him off—simple. But at work, this might not be the best course of action. For all you know, your boss could overhear you and rethink her decision to promote you because of some hidden temper she didn’t know you had. Word could spread to other co-workers that you’re a heartless you-know-what and those friendly happy hours will be a thing of the past. As hard as it is in the heat of the moment, you have to think before you speak. 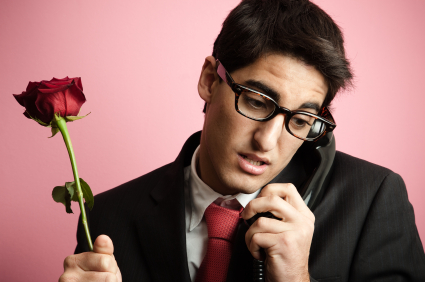 What Would Kristina Do

Your friends will hate you for this at first, but as long as there’s no real harm done, they’ll get over it the next day. Suggest meeting up with some of your hottest girl pals and see where his eyes lead him. Women have a natural inclination to help their friends out of trouble. Therefore, if flirting with a co-worker can help you avoid unwanted eye contact in the office, a good girlfriend will suck it up and take the heat for the night. Always use your hotness to your advantage.

Do what we all did in Junior High when Valentine’s Day came around and the love of our pre-pubescent lives wasn’t with us in homeroom—create one. Make up a boyfriend that doesn’t exist. If your co-worker is just a dude with a crush, he won’t go digging into your Facebook to find the last picture you took with a guy standing next to you. It’s a stress-free way of letting him know that you’re off the market. Plus, it’s the one time you can make up a pretend boyfriend without being lame by default.

There are so many amazing perks to having a boyfriend. You can pig out on the couch in sweatpants while watching Save The Last Dance on a Friday night without being judged . You can also get rid of that cute feminine laugh you use around guys you barely know, because boyfriends don’t give a shit how manly your real voice is. And in this case, warding off potential pursuers! Bring your boyfriend around the office, or arrange a time to meet him when you happen to be with your co-worker. This is the polite way of saying “He’s trained to attack.”

It’s 2012 and women, for lack of a better phrase, have a lot of shit going on, all the time. Hence, the “I don’t have time for a relationship” speech is always a winner because sadly, it’s almost always true. The one loophole that guys either haven’t figured out yet or don’t care to address is that if we’re interested, we will make time. But, because Mr. Googly Eyes will never figure this out, it’s the perfect go-to excuse. Make yourself look extra busy at work! Stay late for a couple nights out of the week! All of this will reassure him that you are, in fact, un-dateable.

When all else fails, you can always do the grown-up thing by setting the record straight. Let him down easy and say you’re just not interested in him as more than a friend. 9 times out of 10, the following week will be filled with lots of awkward conversation. You can’t get around that certainty no matter how you look at it. But after the tension has passed, you’ll be able to take comfort in the fact that you diffused the situation by taking the high road. And if that doesn’t make you feel better, that’s why we have margaritas.

Remember, because it’s taking place at work, you have to tread lightly and choose your words extra wisely. Instead of saying “Quit the creepy looks,” try bringing up a neutral conversation that brings the attention away from how gorgeous he finds you and focuses it on a project at work. Chances are he’s just a regular guy who’s trying to find a decent relationship; and at the end of the day, how can you fault him for that? At least he has good taste.