If you couldn’t tell from the title, we’re talking about The OC today, duh! Driving into work this morning I was reflecting on my life thus far and I found myself repeating one of my mantras from high school…

“What would Summer Roberts do?”

For those of you who don’t know who Summer Roberts is, shame on you. Clearly you missed out on a pivotal show for every teenager in America and a pop culture phenomenon. That being said, I strongly encourage you to order the television series The OC from Amazon ASAP. In high school, Summer Roberts was my life. I dressed like her, talked like her and wrote an essay about her for my English class (really, I did). I dreamed about the one day my own Seth Cohen would awkwardly walk into my life and recite the poem “I Wish I was a Mermaid” for me.  I also secretly hoped that on the day I got my SAT scores back it was discovered that I was like a complete genius and therefore got to go to Brown University – yeah, not so much.  Even though The OC was cancelled almost 10 years ago, I still idolize Summer Roberts and you know what? You should to. She’s an icon. Here’s why:

1. Seth Cohen – need I say more? She marries possibly the most famous geek in pop culture and is badass enough to not even call him by his first name.

2. This kind of goes along with number one but, she made dating a geek cool. Because of her I spent many days fantasizing about guys that even SOMEWHAT resembled Seth Cohan.

3. She trademarked the phrase “Um, ew!” Before Jimmy Fallon ever utter the phrase it was Summer Roberts. Googled it, I’m right. If The OC had been on TV during the days of Twitter #ew would have trended worldwide every single week.

4. I already mentioned this but she’s secretly a genius! Okay, so not only is she pretty, spunky, rich, skinny, and fashionable but she’s fucking smart too? Not fair. I’m jealous of someone who doesn’t actually exist. FML

5. She wrote a poem called “I wish I were a Mermaid” – hi, that’s my life! Really, check my “about me” on Twitter. It says it right there!

6. Naming a bunny rabbit after your favorite food is badass. Pancakes is hands down the best name for bunny!

7. She’s obsessed with a show that is essentially The OC, only in the world of The OC it’s called The Valley… does that make sense? Anyways, because Summer Roberts lives vicariously through a TV show and quotes it 24/7 I feel  as though I have permission to also do this.

8. She suffers from “rage blackouts” – honestly what girl doesn’t? But once again, she owns it.

9. Two words: Princess Sparkle, her toy Unicorn that is her life. Okay mermaids AND unicorns? Why am I still even making this list? She’s a goddess!

(SPOILER ALERT) Why IMDB is the Biggest Spoiler Alert of Them All! 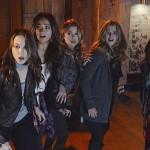 Pretty Little Liars Recap: A is for Alive