“The Best Movie Since The Lion King?” Hold up. The latest animated motion picture from the studios of Disney is literally storming the world. As nineties kids, there will never ever be a movie that changes our lives like The Lion King, but I must say that Frozen is pretty revolutionary for Disney. I will explain further with quotes and gifs. And oh yeah, Spoiler Alert.

First and foremost reason that Frozen is just plain awesome? We finally got a princess – a QUEEN, actually – who doesn’t fall in love or get married. And that Queen is Elsa. Cursed with the power of turning what she touches into ice and creating snowstorms in summer, Elsa is kept hidden from the kingdom from a young age and doesn’t reappear to the masses until her coronation, three years after her parents are killed in a shipwreck. At her coronation, her fearless and optimistic younger sister Anna pushes her to the brink and the whole kingdom knows that she has powers. Whoops. The cold never bothered me anyway…

Anna, the aforementioned younger sister, is actually seen not looking perfect. She’s clumsy, awkward, and does not know how to talk to men. At all. She falls in love with the first guy she ever sees (no, seriously), completely trusting in the idea of true love. Anna is like us. She wakes up unattractive and says “wait, what?” a lot.

“You can’t marry a man you just met.” –Elsa to Anna. About damn time, Disney. About time.

“Let it Go” – Seriously, if you haven’t heard the song, YouTube it RIGHT NOW. Elsa goes from put-together, reserved Queen of Arendelle to the sassy Ice Queen. Disney has never given us a better girl power song ever. It sounds cheesy and sappy, but it’s all about being yourself, a message that little girls (and us, too, probably) need to hear more often than we do. If we don’t let others hold us back, we’re capable of great things.

Sisterly Love. Even though Anna thinks her sister hates her, she still goes into the blizzard and through the mountains to bring her back home. Elsa only leaves because she wants to protect her sister from the uncontrollable ice powers (when the girls were little, Elsa struck Anna with ice and froze her head; later she accidentally strikes her heart. uh oh). They’re all each other has, and they know it.

Being alone is not a bad thing. Something else Disney has always had a hard time telling us. Not one, but two characters are fine being alone. Elsa goes into the mountains so that she can be herself in her ice palace. Kristoff, a regular guy who’s not a prince or a criminal, enjoys being alone (except for the company of his faithful reindeer companion, Sven). YES I’M ALONE, BUT I’M ALONE AND FREE.

OLAF. The snowman that we all thought would be incredibly annoying actually teaches us more about love than any romance that ever was. He doesn’t judge, has no capacity for hate, and doesn’t say one negative thing about anyone the whole time. He is endlessly happy, and a little naïve, but always 100% honest. We all need an Olaf in our lives.

Prince Hans. We all know one like him: charming, good-looking, chivalrous, and oh so ambitious.  He uses Anna’s optimism against her to get to the throne (he was 13th in line in his own country), and pretends to court her, sings a cute little duet, and proposes all in the same day. He’s that guy in high school who pretended to like you because he needed a prom date, or wanted to get with your BFF. Sadly, Anna doesn’t see his evil until it’s (almost) too late.

THE ENDING. Okay, serious spoiler alert here. So Anna’s heart is freezing and only an act of true love can save her. Obvi Hans is out for the count here. Anna thinks Kristoff will be the one to save her, and he almost is. EXCEPT Hans is about to behead Elsa, and Anna shuffles her freezing body just in time to freeze into solid ice before Hans’ sword, stopping him from killing her sister. Anna freezes, but Elsa realizes how much love they have for each other, and Anna unfreezes becauseeee LOVE WILL THAW A FROZEN HEART. True love doesn’t have to mean a prince or a guy. Just like The Lion King, family comes first! Always!

I do not own nor did I create/make any of the gifs. Frozen rights belong to Disney. This has been a disclaimer. 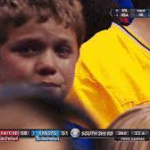