I grew up vacationing in two places: Disney World and Cape Cod.

In Disney, we stayed at The Polynesian, the South Pacific themed resort with Tiki Torches manning every corner. The hotel was right on the beach with the Magic Kingdom across the water and above us the monorail ran around in circles. I loved the scenery, the decorations, and that crazy electric light parade that took the seven seas every night. But the best thing about the Polynesian was the hotel’s next door neighbor – The Grand Floridian. It was, what I liked to call as a child, the old people hotel. Because the only people who seemed to stay there were old people who were… getting married.

I remember watching the wedding celebrations from afar. A woman in a white dress and a man in a suit were always roaming around outside snapping pictures. And when we went to eat at the hotel’s costume breakfast, we would enter the resort to see the big spiral staircase and a bride and groom pair again taking photos. They were everywhere. It was ‘magical,’ as most things at Disney were.

“I want to get married here,” I would say to my 10 year old self. There or on the beach in Cape Cod where I vacationed every Summer, because I saw weddings happen there too.

But that was it.

From there on out, I never fantasized about my wedding.

I never dreamed about wearing a wedding dress. I never became attracted to engagement rings. I never even thought about who would be at my wedding. Including my future husband. Or myself. I just didn’t picture it.

I entered my first real relationship when I was 19. It didn’t last long, but I thought I was in love and I thought that was it. My parents were high school sweethearts, so in my head I thought any guy I dated would never break up with me and would eventually have kids with me, because that’s all I knew. It was like I skipped right from the wedding fantasy to the kids fantasy.

Eventually I navigated my way into the relationship I’ve been in the past four and a half years and still, at age 25, while people around me are starting to get engaged left and right, the idea of a wedding just doesn’t excite me.

It’s just that when I hear the word marriage, I think kids, a suburban house, and a joint bank account… I don’t think of a white dress and a honeymoon. Perhaps this is because I knew my whole my life that my parents got married and then had me and then had three other kids and that was their life… so of course, I wanted this same life in return.

Now I realize this all may be why I freak out when people my age, or around my age, get engaged.

To me engagement means ready-to-have-kids and I am NOT ready to have kids.

But that’s not what getting married means to everyone. To some people, getting married means having a wedding and then not having kids for a few years — IF EVER. People in this mindset want a few years (or an entire lifetime) to enjoy married life without kids… but to me, this just seems like the life I’m living now with my boyfriend, without the legal bindings. So why would I have an interest getting married at the same time as these types of people anyway? I’m certainly not on the same page as them. But the bigger problem – Why do I even care? Or let this affect me? Everyone’s different.

No, I don’t see the appeal of buying a boring white wedding dress that looks like every other bride’s dress. No, I don’t get off to pictures of diamond rings. No, I’m not looking forward to draining my non-existent bank account to celebrate something I can celebrate every day. And no, I don’t have a Pinterest wedding board to “plan” my future wedding like so many other ladies out there. All wedding pictures look the same to me. It’s like having a wedding in your late 20s is equivalent to shopping at Forever 21 in college… Everyone’s doing it, but I just want to be different and look 10 times better than everyone else.

So yeah, I’ll have the wedding one day because I want to get married. But just because people my age are starting to get engaged and I’ve been in a long term relationship doesn’t mean I have to start thinking about getting engaged too. It will happen when it happens. And, like I’ve always said, when it does I’ll be ready to start having kids. But if we’re being serious here — that’s not going to happen any time soon.

The day I decide that it’s not okay to get drunk on a regular basis and also decide to stop spending the majority of my paychecks on clothes, then MAYBE I’ll be able to think about marriage. But, I’m way too self involved right now, so that’s probably going to be a while.

At least I know that. 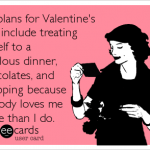 No Moping Zone: How to Celebrate You on Valentine’s Day