Somewhere, deep in the heart of a secret fortress that no man shall ever enter, lies a sacred laundry list of things that women hate to admit. We all know about the list as soon as we shoot out of the womb; and, for the most part, we tend to keep the contents pretty private. It’s almost as if the entire female species follows an unspoken rule that forbids men to gain access to this part of ourselves. If we choose to share the things that we HATE to admit with our girl-friends, or sisters, or crazy aunts—fine. So be it. No harm done. But as far as talking about it with a dude? Find me an intellectually sound phrase for, how can I say this, HELL NO.

Like the old cliché goes, some things are better left unsaid. Like, for example, how women take shopper’s therapy a little too seriously and end up spending half the rent on two new pairs of platforms that they can’t stop gawking at through the shiny Soho window they pass every day on their way to work. Or, instead of going to the gym like we tweeted about 60 seconds ago, maybe we make the executive choice to scarf down a pint of coffee ice cream because we’d rather watch The Notebook on ABC Family for the 47th time. Now what good would spilling these secrets to our boyfriends do? There are some things that a woman should keep to herself. It’s just a fact of life.

There’s a really good chance that by the end of this blog, women might hate me, for lots of reasons. Giving guys the insight that they’ve been seeking for centuries, unlocking the door to more questions with more answers; maybe I’m taking a risk here. But consider this before having a meltdown: Couldn’t the opportunity to confront the things we hate to admit inadvertently benefit our relationships? Maybe not the little things like shopping, pigging out, and the OCD panic attacks that occur when we find a dirty sock wedged in between the couch cushions, but the big things that cause real arguments. Couldn’t this solitary confession make our love lives easier?

Deep down, you’ve gotta admit that I might be on to something. So for better or worse, take the following and use it. First, curse me out for writing about it. Second, recognize how true it is. Then, apply it to your relationships; not just with your boyfriend, but with everyone in your life. Trust me, it will do wonders.

What We Hate To Admit

Women can argue about anything. The expiration date on the 1% milk carton in the fridge, the color of Aria’s dress on last week’s episode of Pretty Little Liars, approximately how long it takes to walk from Grand Central to the nearest Starbucks, etc. etc. Seriously, we never stop trying to prove ourselves right. Now if we were getting paid exuberant amounts of money to stand trial and defend the arguments of alleged criminals, maybe the time and dedication we put toward our debating skills would benefit someone besides ourselves. But the last time I checked, the closest connection I have with a courtroom is via my TV screen every Sunday when Law & Order: SVU has that obnoxiously addicting, day-long marathon that never gets old (Anyone who doesn’t get excited to sit back and have little girl crushes on Benson AND Stabler are just kidding themselves).

Getting back to the topic at hand, it’s a very simple matter. Women love to argue. We accept all forms of disputes; ranging from fickle to ferocious, and we show no prejudice. Pair that with our inexplicable ability to remember every detail of every inconsequential situation we encounter, and men are somehow expected to survive in our world. For the rest of their lives, they are stranded on a planet filled with us; brain-hijacking geniuses who use our stubborn memories to initiate unnecessary battles that eventually provoke outright wars. 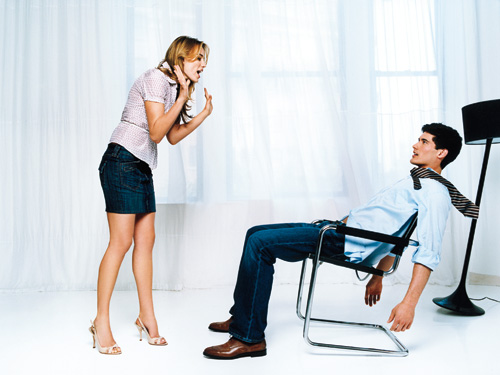 What It Can Do

Why do we do this? Why do we remember to ream him out for not putting the toilet seat down but forget to thank him for buying us breakfast? Why do we single out a small, meaningless action and turn it into the next debate topic? We accuse, exaggerate, and punish the tiniest conceivable discrepancies, just because it’s our nature, and we never come up with a good enough reason to back it up. One of the hardest things for us to admit? When our arguments don’t hold water, purpose, or significance. We can’t stand to look at ourselves in the mirror and say “Sweetie, you better give up on this one before you actually resemble a lunatic.” In the heat of a fight, guys will spit out that one comment, that one magical phrase that shoots down the entire point we’re trying to make. And it’s not because they’re smarter than us (too much?), it’s because after a while, even WE don’t understand why we decided to pick the fight in the first place. But do we back down? The chances of that happening are even slimmer than me winning the Mega Millions.

The saddest part about this little epidemic that we all suffer from is that if we centered our efforts and exerted them on fights that actually made a difference in our relationships, we would be crowned victors every time. But each time we poke and prod at the worthless crap that piles up every day, our argumentative IQ deteriorates until guys don’t even want to bother finding a solution to the bigger problems. And I mean, really, who could blame them? Studies have shown that a man will spend days (maybe even weeks) defending why he missed a call while he was taking a nap. When we’re through ripping into him, we’ve singlehandedly turned that one missed call into a musical production that casts him as “The Notorious Asshole,” and ourselves as “The Innocent and Traumatized Girlfriend.” As much as I adore this kind of plot, something about it doesn’t seem quite fair.

What We’re Left With

If it were possible for females to grow a pair, I would recommend it to every girl I knew (including myself), because it’s these things that make or break a normal relationship. We all fall prey to the thought that a relationship can only ever be headed for disaster for one of three reasons. 1) Someone cheated, 2) Someone lied, or 3) Someone isn’t in love anymore. That couldn’t be further from the truth. Sometimes it’s the resentment that builds up over time because someone feels like their efforts are inadequate. Sometimes life gets in the way and someone drifts apart from someone else because the timing and placement is off. Sometimes it’s the little arguments that transform into a giant knot that can’t be untangled.

And this is where our stubborn behavior enters the picture. Think back to the last 5 times you argued with your boyfriend. If you can’t name the reasons why you fought, it might be because they were THAT unimportant. We can’t change our ways unless we choose to come to terms with this. Sure, you can continue this vicious cycle you’ve set into motion and fight with him about why he watched Family Guy instead of Skyping with you. But brace yourselves, because there might come a day when he gets tired and gives up. And is a good relationship worth losing over a petty fight? Of course not; so ladies, put an end to it. Once and for all, stop reading into a one-word text message—maybe he was just busy when he answered it. Don’t mistake his silence for anger—it could just be that he’s exhausted. Stop chastising him for the little things that don’t matter and focus on the bigger picture, because that’s the only thing that holds weight. Like I said before, stop choosing battles you’ll never win. Instead, put your big girl panties on, tell your ego to screw off, and be smart enough to pick an adult-sized problem to debate on.

A special thank you to every man out there who manages to tolerate our feminine power trips without taking to alcoholism. On behalf of all decent (and sometimes crazy) women in the world, we greatly appreciate your efforts and look forward to doing logically balanced business with you in the future.

10 Things I Don’t Understand About Guys