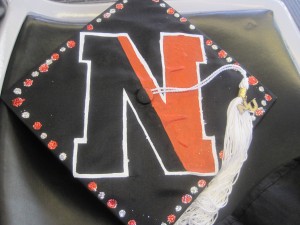 May 6th, 2011. I think I had this date marked down in my calendar for years. Finally, after 5 years of college, I would graduate. Since I went to a university that had a co-op program, I would have 4 years of classes, with an extra year of real-world work experience thrown in for good measure. I knew that having my bachelor’s in English would somewhat limit my options for employment post-college; work experience was necessary for getting a job. When I first started college, I had all these hopes and dreams for what the next 5 years would be like. What clubs would I join? Would I make lots of new friends? What parties would I attend? Will I meet my future husband here?

Flash forward 5 years later, and all these questions were answered. I joined a club that gave me the opportunity to mentor young inner-city elementary students in Boston. I made lots of new friends, including some that will most likely be friends for life. I attended a lot of parties, but still managed to fit in plenty of studying. And I didn’t meet my future husband there, but I did meet my current boyfriend through a mutual friend right before senior year.

With a walk across a stage, a shake of the Dean’s hand, and a turn of a tassel, I was a college graduate. In the weeks after graduation, I was on cloud nine. I had a job in publishing lined up for me thanks to the co-op experience I had while I attended college and a lease signed for a new apartment I had gotten with a few friends in a better part of town. I had it made! 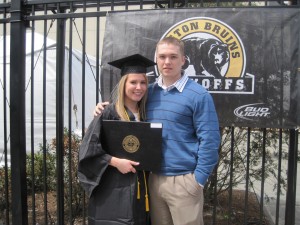 In the months after graduation, the glow began to wear off. My job was not exactly what I wanted to be doing, and since it was freelance work I didn’t receive any benefits/vacation days/401K/etc. My student loans kicked in at the six-month mark and I was slapped with a harsh reality. I had to pay for college 100% myself, so I was somewhat prepared with what I would expect to pay monthly with the help of my family’s accountant. It still didn’t make dropping more cash on my monthly loan payments than my rent any easier. I definitely was starting to feel a form of post-college depression. I felt like I was never going to get ahead, that I was wasting my degree, and that I was going to always be broke.

My boyfriend tried to be supportive as best he could. As an almost 3-years post-grad currently working in the Finance world, he had a much better handle on his finances and his career. He owned a car he bought himself after graduating. He recently had bought a two-bedroom condo that he had saved up for years for. He was taking the steps to get certificates that would propel him forward in the financial world. I constantly felt like I was not good enough. This little ol’ English major with no car, no house, an unstable job, and over $100,000 of debt didn’t have much to offer. The comparison trap is a dangerous thing.

With 2012 quickly approaching, I realized that I needed to change the way I felt about my situation. I was the lucky one; I had a job, a place to live, and a boyfriend who loved me dearly. Having such a depressing and fatalist view of life was not the way to enjoy my early twenties. It was around this time that I started my blog, Blonde Bostonian, which gave me an outlet to write about my life and things that interested me; something I didn’t get to do very much of in my writing/editing job at work. I also took my passion for running to the next level. I took up running and racing in college as a way to challenge my body and alleviate the stress of school. I decided to take the big leap that winter and signed up for a half marathon. So I spent the beginning months of 2012 training for my first half-marathon and blogging all about it, and I quickly noticed my outlook on life changing. 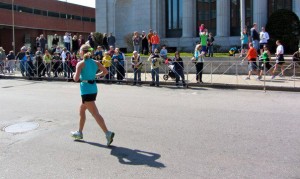 On March 18th, 2012 I ran that half-marathon and finished it! For anyone who is a long-distance runner you know that running is about 20% physical and 80% mental. I pushed myself harder in that race than I ever had before, both mentally and physically, and I wouldn’t change a second of it! By challenging myself to do something big, I realized that I was not helpless, that I could break out of this post-college slump and take control of my life. I signed up for the race and I finished the race, no one else did it. 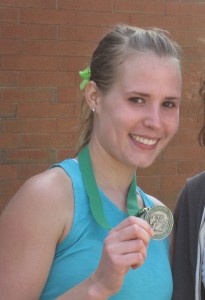 So that leaves us to now, the one year anniversary of my college graduation. I’m still in the job I started after graduation. It isn’t ideal, but I enjoy the people I work with and the work that we do. I’m still with my boyfriend and I’m moving in with him in his condo in August. My blog is growing and has proven to be an amazing outlet for my thoughts. And I have big plans for upcoming races, including another half-marathon in October and a full marathon in the Fall of 2013. My student loans are still high and I’m still not making enough money, but I’m making enough to live and have a little bit of fun too. I’m constantly trying to fight the comparison trap because I know in my heart of hearts that things will get better for me. I’ve learned that graduating college and receiving your degree does not mean that everything will perfectly fall into place. If you feel yourself starting to fall into the post-college depression hole, pick yourself up and figure out what you need to change. Take a chance and challenge yourself to do something different – you might be surprised about the outcome.

Where Are They Now? One Year Later: Lisl Knizner