I truly believe that not enough planning goes into how we intend to get somewhere. We focus more on the end of the line, the final product and where we ultimately want to be. If you had asked me my freshman year what I thought I would be doing when I graduated college, I would not have known. If you had asked me my second year of college I would have told you advertising. And my third and fourth years would have reflected a desire to go into the military (if you ask me now they still would).

I graduated almost a year and a half ago and I am no where that I thought I would be… with the mindset I had at the time or still kickin’ it with many of the people I thought would still be around. At first it was all rather disheartening, but it has all worked out for the better in countless ways. Instead of doing whatever I unrealistically thought I would be doing, I am approaching my one and a half year anniversary working at the same medium sized law firm in the city (that I just happened to have recently moved into).

I am very fortunate in the sense that I have solid employment. I began applying for jobs months before I finished my last semester because I knew that the going was rough right out of school. I thought it was a dream-come-true when the firm offered me a full-time legal assistant position with my lack of experience only weeks after moving back home. To make a long story short, there was a reason they hired someone right out of school, and every bit of emotion, patience, and endurance was tried in my new position. At my lowest point of coping with a tough living situation (see Craigslist post) and a tough job, I would have told you that I would have never seen myself lasting a full year with the firm or in the house I lived in, but these past few months and especially the past few weeks in a new apartment have made me more appreciative of where I am in life than ever before.

So many difficult transitions brought forth a challenging year, but I have learned much more than I thought possible. During the multiple breaking points I encountered when work was tough and things were dramatic at the house I was renting, I always looked to try to change everything at once: my living situation, my job and sometimes my relationships with others.

Bottom line: I tried to change too much at once.

One of the most valuable things I learned was to take small steps when implementing change. Trying to fix it all immediately will burn you out and probably provoke you to cry in bed for hours and/or pick a fight with someone you really don’t want to pick a fight with out of sheer frustration. Been there, done that, wasted time and regretted it all.

There are so many things I want in life. A job that makes a difference (working in a healthcare field or marine-related field), financial stability, happy/meaningful relationships and countless other things I can’t imagine not doing in a lifetime. It can be frustrating not being or ending up where you wanted to be within a premeditated time frame, making it important to keep a clear mind that is focused on what you have at the present time and it’s relation to where you want to go. One of the best things I have done for myself (this will surely benefit me for the rest of my years) has been staying put at my job and home with the understanding that there would be new beginnings eventually, but that was where I needed to be then to get to now. I am SO much happier now that I have gotten one of my new beginnings.

Not only have I acquired the patience to gracefully (sometimes) tread water (while always keeping my eyes and ears peeled for the next big adventure) but used my year of uncertainty to lay a solid financial foundation to build upon. I have no concerns now that when it is time to make my next big move, I am not much else other than ready. 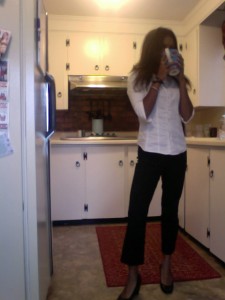 What They Don’t Teach You In College

10 Things I Learned In Atlantic City